The Bullmastiff is a large size breed of domestic dog, with a solid build and a short muzzle. The Bullmastiff shares the characteristics of Molosser dogs, and was originally developed by 19th-century gamekeepers to guard estates. The breed's bloodlines are drawn from the English Mastiff and the extinct Old English Bulldog. It was recognized as a purebred dog by the English Kennel Club in 1924. They are quiet dogs and very rarely bark.[1] 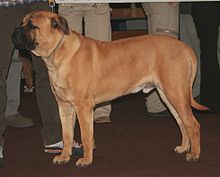 A bunch of Bullmastiff puppies 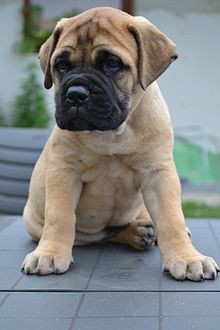 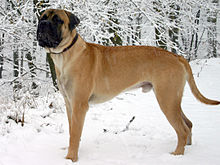 A Bullmastiff's coat may appear in fawn, red, or brindle. These are the only acceptable colors in the AKC standard.[2] The fawn can range from a very light brown to a reddish brown. Red can range from a light red-fawn to a dark rich red. Brindles are a striped overlay of the fawn or red. A bullmastiff should have no white markings, except for on the chest where a little white is allowed.

Bred by English gamekeepers in the 19th century to assist English wardens or gamekeepers guard estates and capture poachers. As a result the Bullmastiff is known as the Gamekeeper's Night Dog. The preferred colour, by gamekeepers, was brindle as this colour works as a more effective camouflage, especially at night.[3] The Bullmastiff was a cross of 40% Old English Bulldog (not the short, chubby Bulldog of today) and 60% English Mastiff for its size, strength and loyalty. They bark much less often than other breeds; however, they will bark on alarm.

The Bullmastiff was recognized as a pure-bred dog in 1924 by the English Kennel Club. In 1934 the American Kennel Club recognized the bullmastiff.[2] The first standard for the breed was approved in 1935.[4] The standard has undergone several revisions since then. The most current version is available on the AKC Web site.[5]

Bullmastiffs are strong, powerful but sensitive dogs. For a Bullmastiff to become a well-behaved family member, consistency is needed. Training and socialization is of high importance as the breed can be independent.[2] Dogs of this breed are natural guardians of their home and owners. No special guard training is needed for a Bullmastiff to react appropriately if his family is endangered. During training, a Bullmastiff requires a special approach, because these dogs do not like to repeat the same actions again and again. Activities bullmastiffs enjoy include obedience, agility, tracking, and carting.[1]

A UK survey puts the median lifespan of the bullmastiff at 7 to 8 years old.[6] A bullmastiff will not stop growing until it is about three and a half years of age. Bullmastiffs are prone to certain hereditary diseases including:

Cosmetic genetic problems include longhairs and "Dudleys". Both are recessives and not common. The Dudley, named after a notable Bulldog breeder of the 19th century, the Earl of Dudley, is a lack of pigment in the mask. It can be liver colored or simply not present.