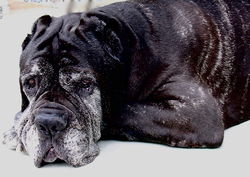 As with humans, advanced years often bring changes in a dog's ability to hear, see and move about easily. Skin condition, appetite and energy levels often degrade with geriatric age, and medical conditions such as cancer, renal failure, arthritis and joint conditions, and other signs of old age may appear.

The changes in care often required by an older dog may lead a non-experienced owner to release the animal to a shelter or rescue organization. Non-profit groups have sprung up in response to the growing need for senior dog rescue.

The aging profile of dogs varies according to their adult size (often determined by their breed): smaller dogs often live over 15–16 years, medium and large size dogs typically 10 to 13 years, and some giant dog breeds such as mastiffs, often only 7 to 8 years. The latter also mature slightly older than smaller breeds—giant breeds becoming adult around two years old compared to the norm of around 12–15 months for other breeds.

The terms "dog years" and "human years" are frequently used when describing the age of a dog. However, there are two diametrically opposed ways in which the terms are defined:

However, regardless of which set of terminology is used, the relationship between dog years and human years is not linear, as the following section explains. 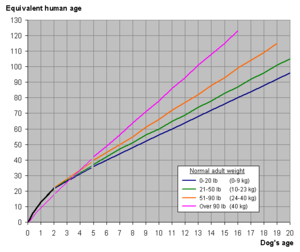 Approximate graph of dog age versus human age, allowing for differing sizes of dog. Click here for larger view, and for data sources.[3]

They can be summarized into three types:

No one formula for dog-to-human age conversion is scientifically agreed on, although within fairly close limits they show great similarities.

As a rough approximation, the human equivalent of a one-year-old dog is between about 10 and 15 years—a one-year-old dog or cat has generally reached its full growth and is sexually mature, although it might still be lanky and need to fill in a more mature musculature, similar to human teenagers. The second year is equivalent to about another 3 to 8 years in terms of physical and mental maturity, and each year thereafter is equivalent to only about 4 or 5 human years.[5]

Emotional maturity occurs, as with humans, over an extended period of time and in stages. As in other areas, development of giant breeds is slightly delayed compared to other breeds, and, as with humans, there is a difference between adulthood and full maturity (compare humans age 20 and age 40 for example). In all but large breeds, sociosexual interest arises around 6–9 months, becoming emotionally adult around 15–18 months and fully mature around 3–4 years, although as with humans learning and refinement continue thereafter.

The two longest living dogs on record, "Bluey" and "Chilla", were Australian Cattle Dogs.[7] This has prompted a study of the longevity of the Australian Cattle Dog to examine if the breed might have exceptional longevity. The 100-dog survey yielded a mean longevity of 13.41 years with a standard deviation of 2.36 years.[8] The study concluded that while Australian Cattle Dogs are a healthy breed and do live on average almost a year longer than most dogs of other breeds in the same weight class, record ages such as Bluey's or Chilla's should be regarded as uncharacteristic exceptions rather than as indicators of common exceptional longevity for the entire breed.[8]

A random-bred dog (also known as a mongrel or a mutt) has an average life expectancy of 13.2 years in the Western world.

These data are from Michell (1999).[9] The total sample size for his study was about 3,000 dogs, but the sample size for each breed varied widely. For most breeds, the sample size was low. For a more comprehensive compilation of results of longevity surveys, see the breed data tables at the Dog Longevity web site.

A major study of dog longevity, which considered both natural and other factors affecting life expectancy, concluded that:

"The mean age at death (all breeds, all causes) was 11 years and 1 month, but in dogs dying of natural causes it was 12 years and 8 months. Only 8 percent of dogs lived beyond 15, and 64 percent of dogs died of disease or were euthanized as a result of disease. Nearly 16 percent of deaths were attributed to cancer, twice as many as to heart disease. [...] In neutered males the importance of cancer as a cause of death was similar to heart disease. [...] The results also include breed differences in lifespan, susceptibility to cancer, road accidents and behavioral problems as a cause of euthanasia."[9]

In general, dogs age in a manner similar to humans. Their bodies begin to develop problems which are less common at younger ages, they are more prone to serious or fatal conditions such as cancer, stroke, etc., they become less mobile and may develop joint problems such as arthritis, and in old age often become less physically active. Additionally, they become less able to handle change, including wide climatic or temperature variation, and may develop dietary or skin problems or go deaf. In some cases incontinence may develop and breathing difficulties may appear.

"Aging begins at birth, but its manifestations are not noticeable for several years. The first sign of aging is a general decrease in activity level, including a tendency to sleep longer and more soundly, a waning of enthusiasm for long walks and games of catch, and a loss of interest in the goings on in the home."[15]

The most common effects of aging are:[16]