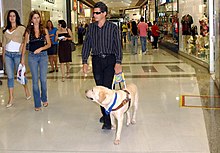 A blind man is led by his guide dog in Brasília, Brazil 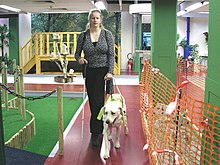 Although the dogs can be trained to navigate various obstacles, they are partially (red–green) color blind and are not capable of interpreting street signs. The human half of the guide dog team does the directing, based upon skills acquired through previous mobility training. The handler might be likened to an aircraft's navigator, who must know how to get from one place to another, and the dog is the pilot, who gets them there safely.

In several countries, guide dogs, along with most service and hearing dogs, are exempt from regulations against the presence of animals in places such as restaurants and public transportation.

References to guide dogs date at least as far back as the mid-16th century; the second line of the popular verse alphabet "A was an Archer" is most commonly "B was a Blind-man/Led by a dog".[1] In the 19th-century verse novel Aurora Leigh by Elizabeth Barrett Browning, the title character remarks, "The blind man walks wherever the dog pulls / And so I answered."[2]

The first guide dog training schools were established in Germany during World War I to enhance the mobility of returning veterans who were blinded in combat, but interest in guide dogs outside of Germany did not become widespread until Dorothy Harrison Eustis, an American dog breeder living in Switzerland, wrote a first-hand account about a guide dog training school in Potsdam, Germany, that was published in The Saturday Evening Post in 1927. Earlier that same year, U.S. Sen. Thomas D. Schall of Minnesota was paired with a guide dog imported from Germany,[3] but the guide dog movement did not take hold in America until Nashville resident Morris Frank returned from Switzerland after being trained with one of Eustis's dogs, a female German shepherd named Buddy. Frank and Buddy embarked on a publicity tour to convince Americans of the abilities of guide dogs and the need to allow people with guide dogs access to public transportation, hotels, and other areas open to the public. In 1929, Eustis and Frank co-founded The Seeing Eye in Nashville, Tennessee (relocated in 1931 to New Jersey).

The first guide dogs in Great Britain were German shepherds. Four of these first were Flash, Judy, Meta, and Folly, who were handed over to their new owners, veterans blinded in World War I, on 6 October 1931 in Wallasey, Merseyside.[4] Judy's new owner was Musgrave Frankland.[5][6] In 1934, The Guide Dogs for the Blind Association in Great Britain began operation, although their first permanent trainer was a Russian military officer, Captain Nikolai Liakhoff, who moved to the UK in 1933.[6] 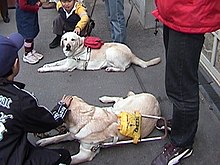 Early on, trainers began to recognize which breeds produced dogs most appropriate for guide work; today, Golden Retrievers, Labradors, and German Shepherds are most likely to be chosen by guide dog facilities, although other breeds, such as Standard Poodles, Collies, Border Collies, Australian Shepherds, Staffordshire Terriers, Vizslas, Dobermans, Rottweilers, American Pit Bull Terriers, Boxers, and Airedale Terriers, may also be selected. Guide dog breeds are chosen in relation to height at the shoulder measured against harness length and an individual's height.

Crosses such as Golden Retriever/Labrador (which are popular due to both breeds' known intelligence, work ethic, and early maturation)[citation needed] and Labradoodles (Labrador/Poodles bred to provide dogs with less shedding for those with allergies to hair or dander) are also common.

The most popular breed used globally today is the Labrador Retriever. This breed has a good range of size, is easily kept due to its short coat, is generally healthy and has a gentle but willing temperament.[9] 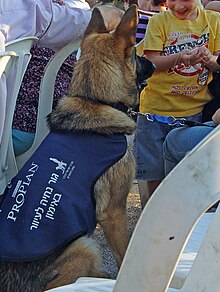 A guide dog in Israel

Despite regulations or rules that deny access to animals in restaurants and other public places, in many countries, guide dogs and other types of assistance dogs are protected by law and therefore may accompany their handlers most places that are open to the public. Laws and regulations vary worldwide:

Because some schools of thought in Islam consider dogs in general to be unclean,[11] many Muslim taxi drivers and store owners have refused to accommodate customers who have guide dogs, which has led to discrimination charges against them.[12] However, in 2003 the Sharia Council, based in the United Kingdom, ruled that the ban on dogs does not apply to those used for guide work.[13]

Benefits of owning a guide dog[edit] 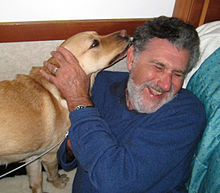 Elliot Aronson, a notable social psychologist and his guide dog, Desilu, whom he received in January 2011

Studies show owning a pet or therapy animal offer positive effects psychologically, socially, and physiologically. Guide dogs especially come with a variety of benefits and help in many ways. They give a blind person more confidence, friendship, and security.[14] Blind people who use guide dogs have increased confidence in going about day-to-day life and are comforted by a constant friend.[15] Companionship offered by a pet helps reduce anxiety, depression, and loneliness. Because dogs offer support, security, and companionship, stress is reduced, which in turn improves cardiovascular health. “A number of studies identify pet ownership as a factor in improved recovery from illness and in improved health in general”. Guide dogs make it easier to get around, resulting in the person getting more exercise or walking more.[14] People are more willing to go places and feel a sense of independence.[15] Meeting people and socializing is easier, and people are more likely to offer a blind person help when there is a guide dog.[14] The dogs lead to increased interaction with other people. Dogs are seen as “ice breakers” to a conversation and something to talk about.[15] In many cases, guide dogs offer a life changing experience. They are more advantageous than long canes when one is in an unfamiliar place. The dog directs the right path, instead of poking around wondering if you might bump into something. Guide dogs make the experience of the unknown more relaxing.[14] Getting from point A to point B using a guide dog is much faster and safer.[15] Owners of guide dogs share a special bond with their dog. Many report that the dog is a member of the family, and go to their dog for comfort and support. The dog isn’t seen as a working dog, but more as a loyal friend.[14]

This audio file was created from a revision of the "Guide dog" article dated 2006-03-09, and does not reflect subsequent edits to the article. (Audio help)
More spoken articles