The Canadian Eskimo Dog is an Arctic breed of working dog (Canis lupus familiaris), which is often considered to be one of North America's oldest and rarest remaining purebred indigenous domestic canines.[1] Other names include qimmiq[2] or qimmit[3] (Inuit language word for "dog"). The breed is currently threatened with extinction, with a 2008 estimate of only 300 purebred dogs.[4] Although once used as the preferred method of transportation by Inuit in the Canadian Arctic, by the 1960s traditional working dog teams became increasingly rare in the North. Contributing factors to the breed's decline include the increasing popularity of snowmobiles for transportation and the spread of infectious canine diseases.[3][5]

Controversy surrounds the intentional destruction of a debated number of Inuit sled dogs between 1950 and 1970 by The Royal Canadian Mounted Police as well as recent efforts to increase the breed's population. 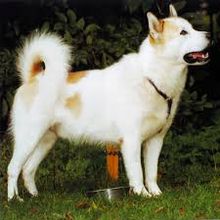 The Canadian Eskimo Dog should always be powerfully built, athletic, and imposing in appearance. It should be of "powerful physique giving the impression that he is not built for speed but rather for hard work."[6] As is typical of spitz breeds, it has erect, triangular ears, and a heavily feathered tail that is carried over its back. Males should be distinctly more masculine than females, who are finer boned, smaller, and often have a slightly shorter coat.

Its superficial similarity to wolves was often noted by explorers during the Coppermine Expedition of 1819–1822. They noted that the ears of the Eskimo dogs they encountered were similar to those of American wolves, and their forelegs lacked the black mark above the wrist characteristic of European wolves. The most sure way to distinguish the two species was said to be through the length and posture of the tail, which was shorter and more curved in the dog.[7] 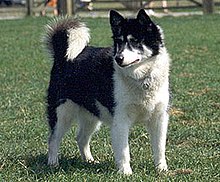 The coat is very thick and dense, with a soft undercoat and stiff, coarse guard hairs. The Eskimo Dog has a mane of thick fur around its neck, which is quite impressive in the males and adds an illusion of additional size. This mane is smaller in females. Eskimo Dogs can be almost any colour, and no one colour or colour pattern should dominate. Solid white dogs are often seen, as well as white dogs with patches of another colour on the head or both body and head. Solid silver or black coloured dogs are common as well. Many of the solid coloured dogs have white mask-like markings on the face, sometimes with spots over the eyes. Others might have white socks and nose stripes with no eye spots or mask.

The Canadian Eskimo Dog's temperament reflects its original work and environment. It is loyal, tough, brave, intelligent, and alert.[9] It is affectionate and gentle, and develops a deep bond with its owner and is intensely loyal. When used as sled dogs, they were often required to forage and hunt for their own food. Consequently, many Canadian Eskimo Dogs have stronger prey drive than some other breeds. Owing to their original environment, they take pure delight in cold weather, often preferring to sleep outside in cold climates. Like most spitz breeds they can be very vocal.

Canadian Eskimo Dogs need a very large amount of exercise. They cannot just be walked, they need higher intensity work, requiring more exercise than many dog owners can give. This need for work and stimulation makes them well-suited for dog sports, such as carting, mushing, and skijoring. They are very trainable and submissive, unlike many spitz breeds, as well as intelligent. The Canadian Eskimo Dog is best kept in a cold climate, and is prone to heatstroke. Its coat is fairly easy to care for most times of the year, needing brushing only one or two times a week. However when it sheds (which happens once a year) it will need grooming every day.

Historically, Inuit would put their dogs to the harness as soon as they could walk, and would acquire the habit of pulling sledges in their attempts to break free. At the age of two months, the pups would be placed with adult dogs. Sometimes, ten pups would be put under the lead of an older animal, coupled with frequent beatings from their masters, which would educate the pups.[7] 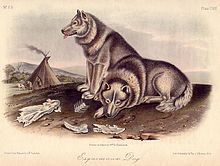 The Canadian Eskimo Dog is known to have been resident in the Arctic for at least 4,000 years.[10][11] The Canadian Eskimo Dog was first bred by the Thule people, while research has shown that it is related to the Greenland Dog, with very little significant genetic differences.[12] It is sometimes considered the same breed by authorities, although the Greenland Dog can be criticized for lacking any proper breeding program, questioning its validity as a pure breed.[13] Inuit never considered the dog as part of the animal kingdom (uumajuit), but merely as a tool for human existence.[11] It was, and still is (to a very limited extent), used by the Canadian Inuit as multi-purpose dogs, often put to work hunting seals and other Arctic game, and hauling supplies and people. Explorers noted that the dogs were capable of tracking a seal hole from a great distance, and were occasionally used to hunt polar bears. The dogs were reported to be so enthusiastic in hunting bears that, sometimes, their handlers shouted "nanuq"[14] (Inuktitut name for the bear) to encourage them when pulling sledges.

The dogs however would not pursue wolves, and would howl fearfully at their approach.[15] Frozen dog urine was used by Inuit as a medicine, and their fur was more prized than that of wolves, due to its greater resistance to wear.[11][16] In times of famine, the dogs would be used as an emergency food source.[11] Though once assumed to be a tamed wolf or wolf-dog hybrid by explorers,[15] including Charles Darwin due to similarities in appearance and vocalisations,[17] genetic testing has shown that the Eskimo dog has no recent wolf ancestry.[18] 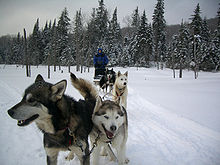 They are sometimes used for recreational hunting of polar bears in Canada. Use of motorized vehicles, such as snow machines, is more common. By law, a dog team must be used for commercial polar bear hunting in NT and NU.

The breed is currently threatened with extinction. In the 19th century and early 20th century, this breed was still in demand for polar expeditions, and approximately 20,000 dogs lived in the Canadian Arctic in the 1920s. However, the breed had declined significantly by the 1960s. The breed had once been accepted for showing by both the American Kennel Club (AKC) and the Canadian Kennel Club (CKC), however in 1959 the AKC dropped the breed from its registry because of extremely low numbers.[19]

Since the 1970s, the Eskimo Dog Research Foundation (EDRF) and Brian Ladoon have worked to increase the breed's numbers. The EDRF was founded in 1972 by William Carpenter and John McGrath and was largely funded by the Canadian Government and the Northwest Territories Government, with some support from the CKC.[20] The EDRF purchased dogs from the small (about 200 dogs) population remaining in the Canadian Arctic from remote Inuit camps on Baffin Island, Boothia Peninsula, and Melville Peninsula.[20] The EDRF then began breeding dogs in order to increase numbers. 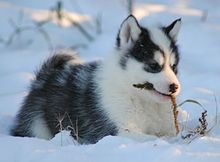 Brian Ladoon also bought dogs in the 1970s from the northern communities of Canada and started breeding after being given the mission of saving them by Bishop Omer Alfred Robidoux of the Roman Catholic Diocese of Churchill-Baie d'Hudson. He switched from Malamutes and Huskies to the CED, and after breeding for 30 years still has the largest genetic stock colony of Canadian Eskimo Dogs in the world. The modern breed originated from a relatively high number of founders, thus ensuring sufficient genetic variability to avoid inbreeding.

The Canadian Eskimo Dog is currently used in sled dog teams that entertain tourists and for commercial polar bear hunting. By law, polar bear hunting in the Northwest Territories and Nunavut must be conducted by dog team.[21][22] The requirement is partly for safety reasons; the working dog can better sense when a polar bear is around, whereas the sound of a snowmobile motor masks any sign of a polar bear. On May 1, 2000, the Canadian territory of Nunavut officially adopted the "Canadian Inuit Dog" as the animal symbol of the territory,[10][23] thus sealing the name of their traditional dog (qimmiq) in the Inuktitut language.

A group of Canadian Eskimo Dogs

Between 1950 and 1970, The Royal Canadian Mounted Police intentionally destroyed Inuit sled dogs. Estimates of the number of dogs killed range from 1,200 to 20,000. In some communities elders have alleged that this destruction was conducted in order to intimidate the Inuit and to intentionally disrupt their way of life.[24] In response to these allegations, in 2005 the RCMP conducted an internal investigation on the killings. Its report concluded that dogs were indeed killed, but for public health purposes - to remove sick, dangerous, and suffering animals. However, the report also acknowledged that the RCMP rarely followed ordinances that required dogs to first be captured and owners to be notified before killings, that owners had no recourse against unreasonable killings, and that the justification for killings were not always explained to the Inuit. The report denies that any dogs were killed as part of a plot against the Inuit. The Qikiqtani Inuit Association denounced the report as “biased, flawed and incomplete.”[3][25][26]