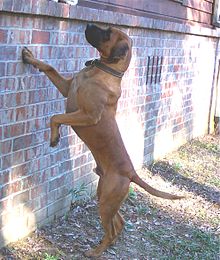 The term cur refers to a mongrel dog. Originally the word cur referred to a certain British purpose-bred, short-tailed cattle droving dog known only from historical records, the cur dog,[1]:459–460 but in modern usage it applies to any mongrel. Test123.

Among dog experts curs are any of several closely related North American purpose-bred treeing hounds, some of which have since achieved breed recognition.[2]

Among dog experts, the terms cur and feist both refer to purpose-bred North American treeing hounds. The term feist, however, is exclusively used for only the smallest of these, such as the DenMark Feist, Mullins' Feist, and the Thornburg Feist; whereas curs are much larger.[5] In addition, the term feist is one of several terms that have been used to refer to the Rat Terrier, which is not a treeing hound.[5]

The Cur Dog is a trusty and useful servant to the farmer and grazier; and, although it is not taken notice of by naturalists as a distinct race, yet it is now so generally used, especially in the North of England, and such great attention is paid in breeding it, that we cannot help considering it as a permanent kind. They are chiefly employed in driving cattle; in which way they are extremely useful. They are larger, stronger, and fiercer than the Shepherd's Dog; and their hair is smoother and shorter. They are mostly black and white colour. Their ears are half-pricked; and many of them are whelped with short tails, which seem as if they had been cut: These are called Self-tailed Dogs. They bite very keenly; and as they always make their attack at the heels, the cattle have no defence against them: In this way they are more than a match for a Bull, which they quickly compel to run. Their sagacity is uncommonly great. They know their master's fields, and are singularly attentive to the cattle that are in them: A good Dog watches, goes his rounds; and, if any strange cattle should happen to appear amongst the herd, although unbidden, he quickly flies at them, and with keen bites obliges them to depart.

Although these dogs had actually been bred, they were nevertheless thought of as lesser mongrels. In the Scottish periodical, Blackwood's Magazine in 1819. The article, "Species and Historic lineage of Canine derivations", penned by Sir P. Sean Lacey of London (1776–1842), cites "separating the miscreants and cur breeds from those of honourable standing". This may have led to the generalized term found in an early Webster's Dictionary which defined "cur" a "worthless dog, or a dog descended from a wolf".

The term cur also refers to any of many purpose-bred North American treeing dogs, including:[7]

Upon arrival in North America, colonists discovered that the British hunting dogs they had brought with them would often quickly lose or abandon quarry that had sought refuge up a tree, as those dogs had been bred to hunt such terrestrial quarry as rabbit, red fox, badger and deer on generally less forested terrain.

In North America, however, there were many animals such as raccoon, opossum, gray fox, tree squirrel, black bear, bobcat and puma which would take advantage of the protection of the trees, where the British hunting dogs would either lose them or grow frustrated or bored and abandon them in favor of quarry on the ground.

Dogs which would naturally tree quarry, regardless of ancestry, were discovered, favored, and bred out of necessity, but as these contained non-pedigree, unknown, or non-European bloodlines, they were looked down upon by dog experts of the time and given the name curs. The usefulness of cur dogs to North American people led the negative connotations of the term to transform into the admiration, pride, and appreciation evidenced among cur breeders, hunters, and fans across the continent to this day.

Historically, they have been at times thought of as mutts or mongrels to reflect the impression that they were somehow lesser than true Eurasian purebred dogs that have been bred for certain physical features instead of or in addition to simple practical task accomplishment. Unlike the true mongrels, however, which are the product of natural selection, random-bred with no human involvement, treeing curs after their initial discovery developed by artificial selection, intentional planning and arranged crossings by human beings, in some cases employing strategic, thoughtful and sophisticated husbandry requiring deep pedigree knowledge and understanding. Nevertheless, American culture has traditionally grouped the curs with mongrels, and outside North America, cur breeds are usually not recognized by major show registries, as most have been selected not for physical features as much as for successful performance in the field, and so many Cur breeds with written appearance standards are relatively "loose" or "flexible". The resultant diversity in appearance within these breeds can present a challenge in judging conformation exhibitions of Cur breeds. Cur breeders assert that their breeding selections' focus on working mentality and physical ability results in the Cur breeds tending to be genetically sound and healthy.[2]

Today the United Kennel Club has an active registration program and competition hunting program for these dogs. It recognizes at least six breeds specifically called cur:[8]

The National Kennel Club has registered these breeds for decades and is famous for their organized hunting competitions. NKC recognizes at least nine breeds specifically called cur:[9]