The Dogue de Bordeaux, Bordeaux Mastiff, French Mastiff or Bordeauxdog is a large French Mastiff breed—and one of the most ancient French dog breeds. A typical brachycephalic molossoid type breed, the Bordeaux is a very powerful dog, with a very muscular body. This brawny breed has been put to work in many different capacities, from pulling carts and hauling heavy objects, to guarding flocks and, historically, the castles of the European elite. 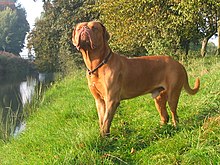 The Dogue de Bordeaux was known in France as early as the fourteenth century, particularly in southern France in the region around Bordeaux. Hence, the city lent its name to this large dog. A uniform breed type of the Bordeaux Dog did not exist before about 1920.[1]

The French placed emphasis on keeping the old breeding line pure. Black masks were considered an indication of the crossing in of the English Mastiff. As an important indication of purity of the breed, attention was paid to the self colored (pink) nose, lighter eye color (dark amber), and red mask. They were originally bred with huge heads; a pioneer for the breed in Germany, Werner Preugschat once wrote:

What am I supposed to do with a dog that has a monstrous skull and is at most able to carry it from the food dish to its bed?

The Dogue de Bordeaux was at one time known to come in two varieties, Dogues and Doguins, the Dogue being considerably larger than the Dougin. The smaller Doguin has withered away to nothing more than a mention in breed history books, as it is no longer in existence.

The Dogue de Bordeaux was once classified into three varieties, the Parisian, the Toulouse and the Bordeaux, types which were bred depending on the region of France and the jobs it was required to do. The ancestral Dogue de Bordeaux had various coat colors, such as brindle and a majority of white markings that carried fully up the legs. It had scissor bites in some regions, undershot in others; a big head or a small head, a large body or a small body; very inconsistent in type. Another controversial aspect was the mask, red (brown), none or black. The Dogue de Bordeaux of Bordeaux of the time also sported cropped ears. Regardless, it had a general type similar to today's Dogue de Bordeaux. 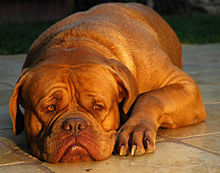 During the 1960s, a group of breeders of the Dogue de Bordeaux in France, headed by Raymond Triquet, worked on the rebuilding of the foundation of the breed. In 1970, a new standard was written for the breed, with the most recent update in 1995. This standard is the basis of the standard written for the AKC in 2005.

Although the Dogue de Bordeaux first came to the USA in the 1890s for the show ring, the first documented Dogues de Bordeaux of modern times appeared in 1959[clarification needed], Fidelle de Fenelon; and in 1968, Rugby de la Maison des Arbres. Between 1969 and 1980, imported Dogues de Bordeaux in the USA were scarce, limited to a few breeders who worked closely with the French Dogue de Bordeaux Club, the SADB. The breed was first "officially" introduced to American purebred enthusiasts in an article written in 1982 and by the American anthropologist, Dr. Carl Semencic for "Dog World" magazine. That article, entitled "Introducing the Dogue de Bordeaux", was followed by chapters dedicated to the Dogue in Semencic's books on dogs, published by T.F.H. Publications of Neptune, New Jersey. When Semencic's first article on the breed was published, there were no Bordeaux Dogues in the United States. There were 600 examples left in the world, mostly in France, Holland and East Berlin, and the breed's numbers were on the decline. Much later, in 1989, the typical American family saw the Dogue de Bordeaux for the first time on the big screen in Touchstone's movie Turner & Hooch about a policeman and his canine partner, although many people[who?] did not know that the massive slobbering animal was a Dogue de Bordeaux.

The Dogue de Bordeaux has begun to flourish is recent years, with its introduction into more movies and even television, as well as its full recognition status by the American Kennel Club, also known as the AKC (full AKC recognition began July 2008). Its numbers are climbing, but careful attention must be paid to health in the breed if its increase in popularity is to show a positive forward motion. 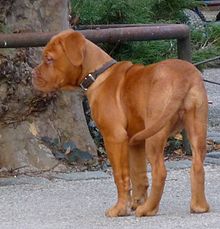 The Dogue de Bordeaux is a well balanced, muscular and massive dog with a powerful build. The Dogue's size should come mostly from width and muscles, rather than height.[citation needed] The breed is set somewhat low to the ground and is not tall like the English Mastiff. The body of the Dogue de Bordeaux is thick-set, with a top-line that has a slight dip (topline is never completely straight) and a gentle rounded croup. The front legs should be straight and heavy-boned, well up on pasterns, down to tight cat-like feet. The straight tail, beginning thickly at the base and then tapering to a point at the end, should not reach lower than the hocks, and is set and carried low. The breed is to be presented in a completely natural condition with intact ears, tail, and natural dewclaws. It should be evaluated equally for correctness in conformation, temperament, movement, and overall structural soundness.[citation needed]

The breed standards by European FCI and the American Kennel Club specify a minimum weight of 100 pounds (45 kg) for a female and 115 pounds (52 kg) for a male.[2] There is no formally stated maximum weight, but dogs must be balanced with regard to their overall type and the conformation standards of the breed.[citation needed] 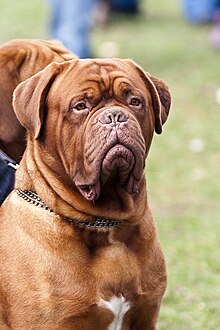 The massive head is a crucial breed characteristic. The Dogue de Bordeaux is claimed to have the largest head in the canine world, in proportion to the rest of the body. For males, the circumference of the head, measured at the widest point of the skull, is roughly equal to the dog's height at the withers (shoulders). For females, the circumference may be slightly less. When viewed from the front or from above, the head of the Dogue forms a trapezoid shape with the longer top-line of the skull, and the shorter line of the underjaw, forming the parallel sides of the trapezoid. The jaw is undershot and powerful. The Dogue should always have a black or red mask that can be distinguished from the rest of the coat around and under the nose, including the lips and eye rims. The nose colour in red-masked dogs should be brown, in black-masked dogs, it must be black. The muzzle should be at most a third of the total length of the head and no shorter than a quarter of the length of the head, the ideal being between the two extremes. The upper lip hangs thickly down over the lower jaw. The upper lips of the Dogue de Bordeaux hangs over the lower lips. The skin on the neck is loose, forming a noticeable dewlap, but should not resemble that of a Neapolitan Mastiff. Small pendant ears top the head, but should not be long and hound like.[citation needed]

The standard specifies the coat to be 'short, fine, and soft to the touch'. Color varies from shades of fawn (light, coppery red) to mahogany (dark, brownish red) with a black, brown, or red mask, although the red mask is true to the breed. White markings are permitted on the tips of the toes and on the chest, but white on any other part of the body is considered a fault, and a disqualifying one if the pigmentation goes beyond the neck.[citation needed]

While larger breeds of canines tend to have shorter life expectancy, the life expectancy of the Dogue is still shorter than even breeds of comparable or larger size.[3] According to data collected by the Dogue De Bordeaux Society of America, the average lifespan of the breed is 5 to 6 years.[4] A veterinary database in the UK showed similar figures.[5] In the American survey, the oldest dog in the record was 12 years old.[4] The Society is actively recording dogs that are 7 years old or older to celebrate the longer-lived dogs.[6]

Because of its brachycephalic head, the Dogue can be affected by breathing problems. (see Brachycephalic syndrome) Some may be heat- and exercise-intolerant as a result.[7] The FCI standard considers excessive shortness of breath and raspy breathing in the Dogue a severe fault.[8] The brachycephalic head shape can also encourage ectropion—an outward rolling of the lower eyelid— which can lead to conjunctivitis (eye inflammation) and bacterial infections.[9] Under the UK Kennel Club's Breed Watch system, the Dogue is classed as a Category 3 breed (formerly High Profile Breed), meaning it is a breed "where some dogs have visible conditions or exaggerations that can cause pain or discomfort."[10]

Aortic stenosis is a disease of the heart valve in which the opening of the aortic valve is narrowed. Symptoms include exercise intolerance, exertional syncope (fainting from physical exertion) and sudden death. One study suggests a high predisposition in the breed. No severe cases were found in adult dogs, and most moderate to severely affected dogs died before one year of age, leading the authors to speculate that the disease is more severe in the Dogue than in other breeds.[11]

Another heart problem in the breed is dilated cardiomyopathy, a condition in which the heart becomes weakened and enlarged and cannot pump blood efficiently. Some affected dogs may die suddenly without showing any signs of problems. Others may die from congestive heart failure after several weeks or months. Affected dogs are often euthanized at an early stage to avoid suffering.[12]

Dogue de Bordeaux in the snow

An estimated 5% of dogs may be affected by footpad hyperkeratosis, a thickening of the footpad and sometimes nose.[13][14] X-rays submitted voluntarily to the Orthopedic Foundation for Animals shows that more than 50% of Dogues in the database are affected by hip dysplasia.[15]