Jump to content
From Wikipedia
File:Egypte louvre 058new.jpg
An Ancient Egyptian figurine of a cat, from the Louvre museum

The cultural depiction of cats and their relationship to humans is as old as civilization and stretches back over 9,500 years. Cats have figured in the history of many nations, are the subject of legend and are a favorite subject of artists and writers. Black cats have been associated with death and darkness.[1]

Cats were originally domesticated because they hunted mice who would eat stored grains, protecting the food stores. It was a beneficial situation for both species: cats got a reliable source of prey, and humans got effortless pest control. This mutually beneficial arrangement began the relationship between cats and humans which continues to this day. While the exact history of human interaction with cats is still somewhat vague, a shallow grave site discovered in 1983 in Cyprus, dating to 7500 BCE, during the Neolithic period, contains the skeleton of a human, buried ceremonially with stone tools, a lump of iron oxide, and a handful of seashells. In its own tiny grave 40 centimeters (18 inches) from the human grave was an eight-month-old cat, its body oriented in the same westward direction as the human skeleton. Cats are not native to Cyprus. This is evidence that cats were being tamed just as humankind was establishing the first settlements in the part of the Middle East known as the Fertile Crescent.[2]

Cats, known in ancient Egypt as the mau, played a large role in ancient Egyptian society. They were associated with the goddesses Isis and Bast.[1] Cats were very commonly depicted in art and routinely mummified. 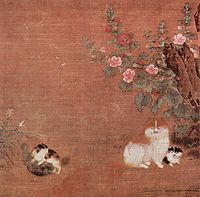 Cats in the Garden, by Mao Yi, 12th century

Cats that were favored pets during the Chinese Song Dynasty were long-haired cats for catching rats, and cats with yellow-and-white fur called 'lion-cats', who were valued simply as cute pets.[3][4] Cats could be pampered with items bought from the market such as "cat-nests", and were often fed fish that were advertised in the market specifically for cats.[3][4]

Folklore dating back to as early as 1607 tells that a cat will suffocate a newborn infant by putting its nose to the child's mouth, sucking the breath out of the infant.[5]

Black cats are generally held to be unlucky in the United States and Europe, and to portend good luck in the United Kingdom.[5] In the latter country, a black cat entering a house or ship is a good omen, and a sailor's wife should have a black cat for her husband's safety on the sea.[6][5] Elsewhere, it is unlucky if a black cat crosses one's path. White cats, bearing the colour of ghosts, are conversely held to be unlucky in the United Kingdom, while tortoiseshell cats are lucky.[5] It is common lore that cats have nine lives.[5] It is a tribute to their perceived durability, their occasional apparent lack of instinct for self-preservation, and their seeming ability to survive falls that would be fatal to other animals.

Cats were seen as good luck charms by actors, and the cats often helped cure the actors' stage fright.[7]

The Greek essayist Plutarch linked cats with cleanliness, noting that unnatural odours could make them mad.[8] Pliny linked them with lust,[9] and Aesop with deviousness and cunning.[5]

Since many equated the Black Death with God's wrath against sin, and cats were often considered in league with the Devil due to their aloof and independent nature, cats were killed in masses. Had this bias toward cats not existed, local rodent populations could have been kept down, lessening the spread of plague-infected fleas from host to host.[10]

A medieval King of Wales, Hywel Dda (the Good) passed legislation making it illegal to kill or harm a cat.[11]

In Medieval Ypres, cats were used in the winter months to control the vermin infesting the wool stored in the upper floors of the Cloth Hall (Lakenhall). At the start of the spring warm-up, after the wool had been sold, the cats were thrown out of the belfry tower to the town square below, which supposedly symbolised "the killing of evil academics". In today's Kattenstoet (Cat Parade), this was commuted to the throwing woolen cats from the top of out houses and also the people from the Middle Ages used to often suck on the wool as a sign of good luck .

In the Renaissance, cats were often thought to be witches' familiars (for example, Greymalkin, the first witch's familiar in Macbeth's famous opening scene), and during festivities were sometimes burnt alive or thrown off tall buildings.

In Japan, there is the Maneki Neko, also referred to in English as the "good fortune" or "good luck" cat. It is usually a sitting cat with paw raised and bent. Legend in Japan has it that a cat waved a paw at a Japanese landlord, who was intrigued by this gesture and went towards it. A few seconds later a lightning bolt struck where the landlord had been previously standing. The landlord attributed his good fortune to the cat's fortuitous action. A symbol of good luck hence, it is most often seen in businesses to draw in money. In Japan, the flapping of the hand is a "come here" gesture, so the cat is beckoning customers.

There is also a small cat shrine (neko jinja (猫神社?)) built in the middle of the Tashirojima island. In the past, the islanders raised silkworms for silk, and cats were kept in order to keep the mouse population down (because mice are a natural predator of silkworms). Fixed-net fishing was popular on the island after the Edo Period and fishermen from other areas would come and stay on the island overnight. The cats would go to the inns where the fishermen were staying and beg for scraps. Over time, the fishermen developed a fondness for the cats and would observe the cats closely, interpreting their actions as predictions of the weather and fish patterns. One day, when the fishermen were collecting rocks to use with the fixed-nets, a stray rock fell and killed one of the cats. The fishermen, feeling sorry for the loss of the cat, buried it and enshrined it at this location on the island.

Another Japanese legend of cats is the bakeneko: when a cat lives to a certain age, it grows another tail and can stand up and speak in a human language.

Cats have been considered good luck in Russia for centuries. Owning a cat, and especially letting one into a new house before the humans move in, is said to bring good fortune.[12]

Cats have guarded the Hermitage Museum/Winter Palace continually, since Empress Elizabeth's reign, when she was presented by the city of Kazan in Tatarstan five of their best mousers to control the palace's rodent problem.[13] They lived pampered lives and even had special servants until the October Revolution, after which they were cared for by volunteers. Now, they are again looked after by employees.

Cats are considered a delicacy by the Ewe people, who believe that eating cat meat, particularly the head, brings good luck to the eater and would prevent them from dying in a foreign land. In Ghana, cats are often associated with witchcraft and evil. Thus, seeing a black cat in one's dream is seen as a bad omen.

Cats have also featured prominently in modern culture. For example, a cat named Mimsey was used by MTM Enterprises as their mascot, and features in their logo as a spoof of the MGM lion.[7]