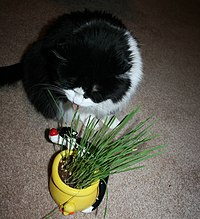 Cat behavior generally understand to the behaviors and habits of domestic cats, including body language and communication. Cat behavior may vary among breeds and individual cats. Many common behaviors include hunting techniques and reactions to certain events as well as interactions with humans and other animals, such as dogs. Communication can vary greatly depending on a cat's temperament. In a family with multiple cats, social position can also affect behavior patterns with others. A cat's eating patterns can also vary depending on the owner's choice of food or eating times/quantities. In the case of a family having two or more cats, one cat may become dominant over the other cats.[citation needed]

Cats rely strongly on body language to communicate. Rubbing against an object, licking, and purring (sometimes) show affection. Purring can also mean that they are hurt or in pain. A cat in pain will purr to show to humans that it is ready to be helped. A kitten will purr roughly three days into its life, this is to show its mother that all is fine and it is content.[citation needed]

This behavior is used primarily to claim ownership of something[citation needed], although unlike male cats, female cats do not usually spray. Some spayed females may spray to mimic males, but do not have enough scent to mark. Once male cats are neutered, the scent rubbing or spraying will, in most cases, decrease or stop. Some male cats continue to spray if not neutered early enough, though sometimes they continue to spray even if they were neutered early in life. 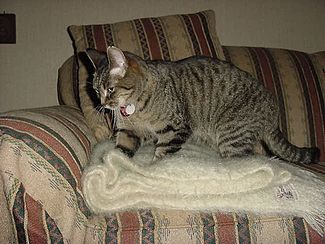 A cat kneading a soft blanket

Kneading is an activity common to all domestic cats whereby, when in a state of ease, they alternately push out and pull in their front paws, often alternating between right and left limbs. Some cats will actually appear to "nurse" or suck on clothing during kneading.

Multiple theories exist that explain why cats knead. Kneading may have an origin going back to cats' wild ancestors who had to tread down grass or foliage to make a temporary nest in which to rest. Alternatively, the behavior may be a remnant of a newborn's kneading of the mother's teat to stimulate milk secretion. Since most of the preferred "domestic traits" are neotenous or juvenile traits that persist in the adult, kneading may be a relict juvenile behavior that is not lost in modern adult domestic cats.

Kneading is often a precursor to sleeping.

Many cats purr while kneading. They also purr mostly when newborn, when feeding, or when trying to feed on their mother's teat. The common association between the two behaviors may corroborate the evidence in favor of the origin of kneading as a remnant instinct. Some experts consider kneading to "stimulate" the cat and make it feel good, in the same manner as a human stretching.

The cat exerts firm downwards pressure with its paw, opening its toes to expose its claws, then closes its claws as it lifts its paw. The process takes place with alternate paws at intervals of one to two seconds. They may do this while sitting on their owner's lap, which may prove painful if the cat is large or strong or has sharp claws (as the claws tend to dig into one's lap). Though cats will sit happily on a hard surface, they will only knead a soft or pliant surface, although some cats will reflexively "march" on hard surfaces instead of kneading them.

Cats, compared to many other mammals, have a unique courting style. The first step in courtship is the female coming into season, or "heat". Male cats will be able to smell a female cat in heat miles away and will therefore seek her out. Males will fight mercilessly for the right to be the first to mate with the female. After the dominant male has left, the less dominant males will then each mate with the female in turn. It is therefore possible that even if a male cat loses first breeding rights, he can still be the father. This is also the reason that a litter of kittens can have two or sometimes even three fathers.

Unlike dogs, panting is an uncommon occurrence in cats. However, some cats can pant when stressed, such as a car ride. Most commonly, cats will pant in response to environmental changes, such as anxiety, fear, excitement, or heat. However, if panting is excessive or the cat appears in distress, it becomes important to identify the underlying cause, as panting may be a symptom of a more serious condition, such as a nasal blockage, heartworm disease, head trauma, or drug poisoning. Other problems, such as fatigue, weight loss, poor appetite, excessive drinking, vomiting, or diarrhea, may also be present. If the panting appears to be in response to heat or fear, the owner should remove the stimulation and continue to observe his or her pet. If panting continues, the owner should consult a veterinarian.[1] In many cases, feline panting, especially if accompanied by other symptoms, such as coughing or shallow breathing (dyspnea), is considered to be abnormal, and treated as a medical emergency.[2]

The righting reflex is the ability for cats to land on their feet with little or no injury. They can do this more easily than other animals due to their flexible spine and floating collar bone. Cats also use vision and/or their vestibular apparatus to help tell which way to turn. They then can stretch themselves out and relax their muscles. Cats do not always land unharmed. They can break bones or die from excessive falls.[3]

Cats are obligate carnivores, and can survive without vegetation. Felines in the wild will usually hunt smaller mammals regularly throughout the day to keep themselves nourished. Domestic cats, however, are used to a relaxed lifestyle and, therefore, will eat even smaller amounts, but more regularly. Many cats will find and chew small quantities of long grass but this is not for its nutritional value, it is a purely mechanical function. The eating of grass triggers a regurgitation reflex to help expel indigestible matter, like hairballs and the bones of prey.[citation needed]

File:Tux and edo laying together.JPG
Cats can be sociable. Here, two cats are sleeping together.

Kittens are naturally afraid of people at first, but if handled and well-cared for in the first 16 weeks, they will develop trust in the humans who care for them. To decrease the odds of a cat being unsocial or hostile towards humans, kittens should be socialized at an early age.

It is a challenge to socialize an adult feral cat. Socialized adult feral cats tend to trust only those people they have learned over time can be trusted, and can be very fearful around strangers.

Cats can be extremely friendly companions. The strength of the cat–human bond is mainly correlated with how much consideration is given to the cat's feelings by his human companion. The formula for a successful relationship thus has much in common with human to human relationships.

Some people regard cats as sneaky, shy, or aloof animals. Cats have an inherent distrust for predator species such as humans, and often seek to minimize any contact with people they do not perceive as trustworthy. Feline shyness and aggression around people with cat social skills is often a result of lack of socialization, abuse or neglect. Cats relate to humans differently than more social animals, enjoying some time on their own each day as well as time with humans.

Cats have a strong "escape" instinct. Attempts to corner, capture or herd a cat can thus provoke powerful fear-based escape behavior. Socialization greatly reduces the number of humans that a cat will respond to in this way. Socialization is a process of learning that many humans can be trusted.

There is a widespread belief that relationships between dogs and cats are problematic. However, both species can develop amicable relationships by reading each others' body language correctly. The animals can better read each others' language when they first encounter each other at a young age, due to the fact that they are learning to communicate simultaneously. The order of adoption may also cause significant differences in their relationship. Sometimes, the dog may be simply looking to play with the cat while the cat may feel threatened by this approach and lash out with its claws, causing painful injury. Such an incident may cause an irreversible animosity between the cat and dog.