A bronze statue of the cat goddess Bastet

Cats (Felis silvestris catus), known in Ancient Egypt as mau, were important in ancient Egyptian society. Based on recent DNA comparisons of living species, it has been estimated that cats were first domesticated from the Middle Eastern subsecies of the Wildcat about 10,000 years ago in the Fertile Crescent.[1][2] Thousands of years later, the peoples in what would later be Upper and Lower Egypt had a religion centering around the worship of animals, including cats.

Praised for controlling vermin and its ability to kill snakes such as cobras, the domesticated cat became a symbol of grace and poise. The goddess Mafdet, the deification of justice and execution, was a lion-headed goddess. The cat goddess Bast (also known as Bastet) eventually replaced the cult of Mafdet, and Bast's image softened over time and she became the deity representing protection, fertility, and motherhood.

As a revered animal and one important to Egyptian society and religion, some cats received the same mummification after death as humans. Mummified cats were given in offering to Bast.[citation needed] In 1888, an Egyptian farmer uncovered a large tomb with mummified cats and kittens. This discovery outside the town of Beni Hasan had eighty thousand cat mummies, dating to 1000-2000 BCE. 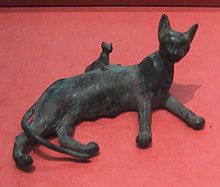 A bronze statue of a domesticated cat and her kitten

Egypt was not always unified; initially, it was a land with many regional tribes and nomes. Many nomes had a totemistic system of religion, centering the worship of an animal as a spiritual symbol. Some peoples would choose a totem animal because of the services it provided, some for admirable qualities, some out of fear. Regardless, when war broke out between peoples, the tribe that won was able to demand more respect for their totem, and mandated its worship. Eventually an empire was formed under Menes circa 3100BC, and a more pluralistic form of totemism was established. Ibises, eagles, and beetles were among the totems worshipped alongside cats.

The Egyptians viewed their gods not as spirits but as intelligences that could be personified in a body. The earliest evidence of cats as deities comes from a 3100BC crystal cup decorated with an image of the lion-headed goddess Mafdet. The goddess Bast was originally depicted as a fiercely protective and warlike lion, like Sekhmet, but as Bast's image "softened" over time she became more strongly associated with domestic cats.

As cats were sacred to Bast, the practice of mummification was extended to them, and the respect that cats received after death mirrored the respect they were treated with in everyday life. The Greek historian Herodotus wrote that in the event of a fire, men would guard the fire to make certain that no cats ran into the flame. Herodotus also wrote that when a cat died, the household would go into mourning as if for a human relative, and would often shave their eyebrows to signify their loss.

Such was the strength of feeling towards cats that killing one, even accidentally, incurred the death penalty. Another Greek historian, Diodorus Siculus, describes an interesting example of swift justice imposed upon the killer of a cat: about 60BC, he witnessed the chariot of a Roman soldier accidentally run over an Egyptian cat. An outraged mob gathered and, despite pleas from pharaoh Ptolemy XII, killed the soldier.

Bubastis and the Cult of the Cat[edit]

Although the cat cult was a religious movement by the birth of the New Kingdom it gained importance when Shoshenq I developed Bubastis, chief centre of worship for the goddess Bast, located east of the Nile Delta, into an important city. At the same time, Bast developed into an immensely popular and important deity representing fertility, motherhood, protection, and the benevolent aspects of the sun - along with Sekhmet, she was known as the Eye of Ra. The cult of the cat garnered a huge following and thousands of pilgrims journeyed each year to Bubastis to celebrate. Bubastis also became another name by which the goddess was known.

Close to the centre of the city lay a large temple to Bast. This temple was in a depression which sited it at a lower elevation to the rest of the city, which had been raised to minimize flood damage from the nearby Nile. Of this Herodotus, who visited the city in 450BC, wrote that although the size of the shrine to Bast was perhaps 'not as large as those of other cities, and probably not as costly, no temple in all of Egypt gave more pleasure to the eye'.

He went on to describe the temple in detail. A canal within this depression gave the temple the appearance of a man-made island. In the courtyard was a grove of trees leading the way to the interior, which contained a massive statue of Bast - and a great number of sacred cats, cared for by the temple priests with donations from pilgrims. The temple's cat population, while respected, was extremely large and needed to be moderated by the periodic sacrificial culling of kittens, which were then mummified and sold to pilgrims as relics.

Bubastis became a marketplace for merchants of all sorts; artisans came forth with thousands of bronze sculptures and amulets depicting cats to worshippers of Bast. These amulets commonly featured an image of a cat and its kittens and were often used by women trying to have children, praying to Bast that they be granted the same number of children as kittens depicted on the amulet.

Herodotus wrote that the annual festival of Bast held in the city was one of the most popular of all, with attendees from all over Egypt, who would raft down the Nile celebrating and feasting all the way. When they arrived in Bubastis, they feasted yet more and made sacrifices to Bast.

The famed revelling and commercialism of Bubastis even made its way into the Hebrew Bible. In the sixth century BC, the prophet Ezekiel wrote that "The young men of Aven and of Pibeseth [Bubastis] shall fall by the sword: and these cities shall go into captivity" (Ezekiel 30:17).

By 525BC, Egypt was essentially the only empire not conquered by the Persians. At that point Cambyses, the son of Cyrus the Great, set out to do just that. Cambyses and his army crossed the fifty-six mile stretch of desert to the Egyptian outpost of Pelesium on camelback; they then clashed down upon the Egyptian army who were reluctant to strike back at the sacred symbol of the cat upon the Persian shields.

Herodotus noted that cats that died anywhere in Egypt were often taken to Bubastis to be mummified and buried in the great cemetery, but this may or may not have been the case. At the burial site in Bubastis the Swiss Egyptologist Édouard Naville found more than 20 m³ (720 cubic feet) of cat remains but also a great deal of evidence of cremation. Naville found stacks of cat bones in many pits, the walls of which were made up of bricks and clay. Near each pit lay a furnace, its bricks blackened from fire. This discovery causes some problems. The mummification and preservation of the body was intended to make it possible for the deceased's ka to locate its host and subsequently be reborn into the afterlife. As the body would have to be intact for this process to occur, cremation would seem an undesirable way of dealing with the body of a sacred creature with a ka. Nevertheless, many cats were afforded the full embalming ceremony and buried in other great cemeteries along the Nile.

In her book The Cult of the Cat, Patricia Dale-Green states that, "The cat's body was placed in a linen sheet and carried amidst bitter lamentations by the bereaved to a sacred house where it was treated with drugs and spices by an embalmer". She goes on to state that although the cat of an Egyptian noble would receive more extravagant burial status, the body of a worker's cat would still be carefully prepared and the embalming carried out with the same conscientiousness as for a human body, often with provisions for the afterlife such as pots of milk and even mummified mice.

Nowhere, perhaps, is this appreciation shown more than in the colossal tomb at the temple of Bast discovered in 1888. This tomb, outside of Beni Hasan, held more than nineteen tonnes of animal mummies and remains, the vast majority being cats but a number of mongooses, dogs, and foxes were amongst the specimens that made it to the British Museum. The farmer who made the discovery sold most of the tomb's contents to be ground up as fertilizer, but fortunately a number of specimens made it into the hands of scientists for testing and examination. Some of these are on display at the British Museum.

The sole Egyptologist to visit the site, William Martin Conway, wrote: "The plundering of the cemetery was a sight to see, but one had to stand well windward. The village children came [...] and provided themselves with the most attractive mummies they could find. These they took down the river bank to sell for the smallest coin to passing travelers. The path became strewn with mummy cloth and bits of cats' skulls and bones and fur in horrid positions, and the wind blew the fragments about and carried the stink afar". (quoted in Tabor p26).

Recently, during the making of his documentary for the BBC, Cats: The Rise of the Cat, Roger Tabor discovered a further cat cemetery at Bast's temple. This find consists of a twenty centimetre-thick layer of compressed mummies which spans more than sixty metres in length.

The cult of Bast was officially banned by imperial decree in AD 390. Egypt has since experienced a decline in the respect once held for cats; they are still kept as pets and tolerated elsewhere because they catch pests. Even so, the cat has not lost all religious significance with modern Egypt's largely Islamic population, since cats are also revered to some extent in Muslim tradition.[3][4]