The Maneki Neko (招き猫?, literally "Beckoning Cat"; also known as Welcoming Cat, Lucky Cat, Cat Swipe, Money cat, or Fortune Cat) is a common Japanese sculpture, often made of ceramic, which is believed to bring good luck to the owner. The sculpture depicts a cat (traditionally a calico Japanese Bobtail) beckoning with an upright paw, and is usually displayed—many times at the entrance—in shops, restaurants, pachinko parlors, and other businesses. Some of the sculptures are electric or battery-powered and have a slow-moving paw beckoning. In the design of the sculptures, a raised left paw supposedly attracts money, while a raised right paw protects it.

Maneki Neko come in different colors, styles, and degrees of ornateness. In addition to sculptures, Maneki Neko can be found as keychains, piggy banks, air fresheners, and miscellaneous ornaments.

Due to its popular presence within Chinese communities it is frequently mistaken for being Chinese in origin rather than Japanese and is mistakenly referred to as a Chinese Lucky Cat.

To Westerners it may seem as if the Maneki Neko is waving rather than beckoning. This is due to the difference in gestures and body language recognized by Westerners and the Japanese[citation needed], with Japanese beckoning by holding up the hand, palm out, and repeatedly folding the fingers down and back up, thus the cat's appearance. Some Maneki Neko made specifically for Western markets will have the cat's paw facing backwards, in a beckoning gesture more familiar to Westerners.[1]

File:Maneki neko by greychr in Japantown, San Francisco.jpg
Sometimes both paws are raised, though this is less common.

Maneki Neko can be found with either the right or left paw raised (and sometimes both). The significance of the right and left raised paw differs with time and place. The most common belief is that the left paw raised brings in customers, while a right paw brings good luck and wealth, although some believe the opposite. Still others say that a left paw raised is best for drinking establishments, the right paw for other stores. (Those who hold their liquor well are called hidari-kiki in Japan, "left-handed"). [2]

Maneki Neko usually have some sort of decoration around their neck. This can be a neckerchief or a scarf but the most common attire is a collar, bell and decorative bib. These items are most likely in imitation of what was common attire for cats in wealthy households during the Edo period. Red collars made from a red flower, the hichirimen, were popular and small bells were attached for decoration and to keep track of the cat's whereabouts.

The bib might also be related to the bibs often decorating statues of the divinity Jizō Bosatsu. Protective statues of Jizō can be found guarding the entrances to Japanese shrines and graveyards. Jizō is the protector of sick and dying children and grateful parents of children recovered from illness will place a bib around Jizō as a gift of thankfulness. 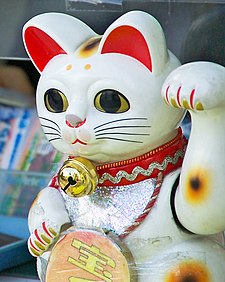 Maneki Neko are sometimes depicted holding a coin; usually a gold coin called a koban (小判?), used during the Edo period in Japan. A koban was worth one ryō, another early Japanese monetary unit, though the koban most Maneki Neko hold is indicated to be worth ten million ryō (千万両), an extraordinary sum of money. A ryō can be imagined as worth a thousand dollars, although the value of the coin, like the value of the dollar, varied considerably. In Japanese, the idiom "koban to cats" (猫に小判, neko ni koban?) is the traditional equivalent of pearls before swine.

The coin obviously ties into the cat's part in bringing good fortune and wealth. It is not surprising then that one can often find Maneki Neko used as banks, a practice which goes back at least to the 1890s, much like the Western piggy bank.

Sometimes, pennies and other small coin denominations are left on the Maneki Neko as offerings. This is a practice somewhat related to that of leaving coins in a fountain or wishing well.

While it is believed that Maneki Neko first appeared during the later part of the Edo period (1603–1867) in Japan the earliest documentary evidence comes from the 1870s, during Japan's Meiji Era. It is mentioned in a newspaper article in 1876 and there is evidence kimono-clad Maneki Neko were distributed at a shrine in Osaka during this time. An ad from 1902 advertising Maneki Neko indicates that by the turn of the century they were popular.[3]

Beyond that, the exact origins of Maneki Neko are uncertain, but there is a folk tale involving a wooden cat shaped this way:

A young woman had a cat, which she valued above all else. One day, she had her friend, a swordsman over. The cat suddenly went frantic, clawing at the woman's kimono. Thinking the cat was attacking her, the swordsman severed the head of the cat, which flew through the air, then lodged its teeth into a highly poisonous snake on the support boards above. After the incident, the woman would neither eat nor sleep. The swordsman felt guilty for what he had done and sad for the woman. He went to a woodcarver, who was called "the best in the land", who made him a carving of the cat, a paw raised in greeting. When he gave the carving to her, she was overjoyed and lived her life again instead of suffering.

A frequent attribution to several Japanese emperors, as well as to Oda Nobunaga and samurai Ii Naotaka, is that one day the luminary passed by a cat, which seemed to wave to him. Taking the cat's motion as a sign, the unknown nobleman paused and went to it. Diverted from his journey, he realized that he had avoided a trap that had been laid for him just ahead. Since that time, cats have been considered wise and lucky spirits. Many Japanese shrines and homes include the figurine of a cat with one paw upraised as if waving—hence the origin of Maneki Neko, often referred to as Kami Neko in reference to the cat's kami or spirit.

Maneki Neko is the subject of a number of legends. Here are three of the most popular, explaining the cat's origins:

The Temple Cat: This story goes that a wealthy feudal lord was taking shelter under a tree near Gotoku-ji temple (in Western Tokyo) during a thunderstorm. The lord saw the temple priest's cat beckoning to him and followed; a moment later the tree was struck by lightning. The wealthy man became friends with the poor priest and the temple became prosperous. When the cat died, supposedly the first Maneki Neko was made in his honor.

The Courtesan: A geisha named Usugumo, living in Yoshiwara, in eastern Tokyo, kept a cat, much beloved by her. One night, the cat began tugging at her kimono. No matter what she did, the cat persisted. The owner of the brothel saw this, and believing the cat bewitched, cut its head off. The cat's head then flew to the ceiling where it killed a snake, ready at any moment to strike. Usugumo was devastated by the death of her companion. To cheer her up, one of her customers made her a wooden likeness of her cat as a gift. This cat image then became popular as the Maneki Neko.

The Old Woman: An old woman living in Imado (eastern Tokyo) was forced to sell her cat due to extreme poverty. Soon afterwards the cat appeared to her in a dream. The cat told her to make its image in clay. She did as instructed, and soon afterward sold the statue. She then made more, and people bought them as well. They were so popular she soon became prosperous and wealthy.

Such is the influence of the Maneki Neko as a cultural icon that many other characters and cultural imagery are derived from it.