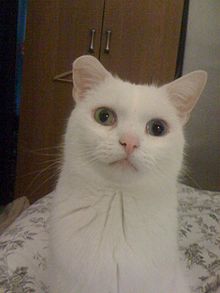 Deaf white cats are domestic cats with a pure white color. Some white cats suffer from congenital deafness caused by degeneration of the inner ear.[1] This condition is associated with blue irises. In white cats with mixed-coloured eyes (odd-eyed cats), it has been found that deafness is more likely to affect the ear on the blue-eyed side.[1] White cats can have blue, gold, green, or copper coloured odd eyes.

In one 1997 study of white cats with varying degrees of hearing deficiency, 72% of the animals were found to be totally deaf. The entire organ of Corti was found to have degenerated within the first few weeks after birth; however, even during these weeks no brain stem responses could be evoked by auditory stimuli, suggesting that these animals had never experienced any auditory sensations. It was found that some months after the organ of Corti had degenerated, the spiral ganglion also began to degenerate.[2]

The gene that causes a cat to have a white coat is a dominant masking gene. As a result, the cat will have an underlying coat colour and pattern. When the dominant white gene is present, however, that pattern will not be expressed. A cat that is homozygous (WW) or heterozygous (Ww) for this gene will have a white coat despite the underlying pattern/colour. A cat that lacks this dominant masking gene (ww) will exhibit a coat colour/pattern. It is, however, possible to have a cat with a naturally white coat without this gene, as an extreme form of white spotting, although this is rare - some small non-white patch usually remains (if only during kittenhood).

There are several sources for a white cat to have blue eyes. If the underlying coat pattern is one of a pointed cat (also referred to as a Siamese pattern), the blue eyes may come from the genetics of the pointed gene. Cats with this genetic makeup have no greater chance of being deaf than the general population.

However, if the eye colour of the cat is due to lack of pigmentation of the iris due to lack of development along the neural crest, the cat will have a much greater likelihood of being deaf. If the cat is odd-eyed (one blue eye and one non-blue eye), the ear on the side with the blue eye may have a greater chance of deafness.

Due to the lack of pigmentation in the skin, white cats are more sensitive to sunlight and are more likely to become sunburned and develop skin cancer.