The genetics of cat coat coloration, pattern, length, and texture is a complex subject, and many different genes are involved.

For a cat to be tortoiseshell, calico, or one of the variants such as blue-cream or chocolate tortoiseshell, the cat must simultaneously express two alleles, O and o, which are located on the X chromosome. Males normally cannot do this, as they have only one X chromosome, and therefore only one allele, and so calico cats are normally only female. Male tortoiseshell or calico cats occur only if they have chromosomal abnormalities such as the genotype XXY (in which case they are sterile), chromosomal mosaicism (only portions of their cells have the genotype XXY, so these cats may be fertile), or chimericism (a single individual formed from two fused embryos, at least one of which was male). Approximately 1 in 3,000 calico/tortoiseshell cats are male.[3] Chimericism (which may result in fertile male cats) appears to be the most common mechanism.

One can deduce that a grey male cat with a white bib and paws: 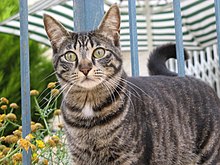 Mackerel tabby with the classic "M" on forehead.

Brown Mackerel tabby cat with pencil lines on the face.

Most or all striping disappears in the chinchilla or shaded cat, but you can still identify the cat as a tabby from these other features.

The genetics involved in producing the ideal tabby, tipped, shaded, or smoke cat is complex. Not only are there many interacting genes, but genes sometimes do not express themselves fully, or conflict with one another. For example, the melanin inhibitor gene sometimes does a poor job blocking pigment, resulting in an excessively gray undercoat, or in tarnishing (yellowish or rusty fur). Likewise, poorly-expressed non-agouti or over-expression of melanin inhibitor will cause a pale, washed out black smoke. Various polygenes (sets of related genes), epigenetic factors, or modifier genes, as yet unidentified, are believed to result in different phenotypes of coloration, some deemed more desirable than others by fanciers.

Here are the genetic influences on tipped or shaded cats:

Cat fur length is governed by the Long hair gene in which the dominant form, L, codes for short hair, and the recessive l codes for long hair. In the longhaired cat, the transition from anagen (hair growth) to catagen (cessation of hair growth) is delayed due to this mutation. A rare recessive shorthair gene has been observed in some lines of Persian cat (silvers) where two longhaired parents have produced shorthaired offspring.

There have been many genes identified that result in unusual cat fur. These genes were discovered in random-bred cats and selected for. Some of the genes are in danger of going extinct because the cats are not sold beyond the region where the mutation originated or there is simply not enough demand for cats expressing the mutation.

In many breeds, coat gene mutations are unwelcome. An example is the rex allele which appeared in Maine Coons in the early 1990s. Rexes appeared in America, Germany and the UK, where one breeder caused consternation by calling them "Maine Waves". Two UK breeders did test mating which indicated that this was probably a new rex mutation and that it was recessive. The density of the hair was similar to normally coated Maine Coons, but consisted only of down type hairs with a normal down type helical curl, which varied as in normal down hairs. Whiskers were more curved, but not curly. Maine Coons do not have awn hairs, and after moulting, the rexes had a very thin coat.

There are various genes producing curly coated or "rex" cats. New types of rex pop up spontaneously in random-bred cats now and then. Here are some of the rex genes that breeders have selected for:

There are also genes for hairlessness:

Some rex cats are prone to temporary hairlessness, known as baldness, during moulting.

Here are a few other genes resulting in unusual fur: