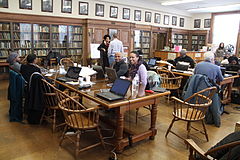 Wikipedia has been criticized for having a systemic racial bias in its coverage, due to an under-representation of people of colour within its editor base.[1] The President of Wikimedia D.C., James Hare, noted that "a lot of black history is left out" of Wikipedia, due to articles predominately being written by white editors.[2] Articles that do exist on African topics are, according to some critics, largely edited by editors from Europe and North America and thus reflect their knowledge and consumption of media, which "tend to perpetuate a negative image" of Africa.[3] Maira Liriano of the Schomburg Center for Research in Black Culture, has argued that the lack of information regarding black history on Wikipedia "makes it seem like it's not important."[4]

Different theories have been provided to explain these racial discrepancies. Jay Cassano, writing for Fast Company magazine, argued that Wikipedia's small proportion of black editors is a result of the small black presence within the tech sector, and a relative lack of reliable access to the Internet.[4] Katherine Mayer, chief communications officer for the Wikimedia Foundation, has argued that focuses in Wikipedia's content are representative of those of society as a whole. She said that Wikipedia could only represent that which was referenced in secondary sources, which historically have been favourable towards white men.[5]

Attempts have been made to rectify racial biases through edit-a-thons, organised events at which Wikipedia editors attempt to improve coverage of certain topics and train new editors. In February 2015, multiple edit-a-thons were organised to commemorate Black History Month in the United States of America. One such edit-a-thon was organized by the White House to create and improve articles on African Americans in STEM.[5] The Schomburg Center, Howard University, and National Public Radio, also coordinated edit-a-thons to improve coverage of black history.[2]