Gender bias on Wikipedia, also known as the gender gap or gender imbalance, is the finding that between 84 and 91 percent of Wikipedia editors are male,[2][3] which contributes to the systemic bias in Wikipedia. It is one of the criticisms of Wikipedia. The Wikipedia community has acknowledged the problem and is attempting to narrow this gender gap.

Surveys have indicated that a distinct minority—between approximately 8.5 and 16 percent—of Wikipedia editors are women.[3][4] Consequently, Wikipedia has been criticized by some academics and journalists for having primarily male contributors,[5][6][7] and for having fewer and less extensive articles about women or topics important to women. The New York Times pointed out that Wikipedia's female participation rate may be in line with other "public thought-leadership forums".[8] In 2009, a Wikimedia Foundation survey revealed that only 6% of editors who made more than 500 edits were female; with the average male editor having twice as many edits.[9]

In 2010, United Nations University and UNU-MERIT jointly presented an overview of the results of a global Wikipedia survey.[10] A January 30, 2011, New York Times article cited this Wikimedia Foundation collaboration, which indicated that fewer than 13% of contributors to Wikipedia are women. Sue Gardner, then executive director of the foundation, said that increasing diversity was about making the encyclopedia "as good as it could be." Factors the article cited as possibly discouraging women from editing included the "obsessive fact-loving realm", associations with the "hard-driving hacker crowd," and the necessity to be "open to very difficult, high-conflict people, even misogynists."[5] In 2013, the results of the survey were challenged by Hill and Shaw using corrective estimation techniques to suggest upward corrections to the data from the survey and to recommend updates to the statistics being surveyed, giving 22.7% for adult US female editors and 16.1% overall.[11] 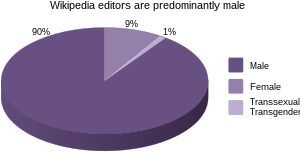 In February 2011, the Times followed up with a series of opinions on the subject under the banner, "Where Are the Women in Wikipedia?"[12] Susan C. Herring, a professor of information science and linguistics, said that she was not surprised by the Wikipedia contributors gender gap. She said that the often contentious nature of Wikipedia article "talk" pages, where article content is discussed, is unappealing to many women, "if not outright intimidating."[13] Joseph M. Reagle reacted similarly, saying that the combination of a "culture of hacker elitism," combined with the disproportionate effect of high-conflict members (a minority) on the community atmosphere, can make it unappealing. He said, "the ideology and rhetoric of freedom and openness can then be used (a) to suppress concerns about inappropriate or offensive speech as "censorship" and (b) to rationalize low female participation as simply a matter of their personal preference and choice."[14] Justine Cassell said that although women are as knowledgeable as men, and as able to defend their point of view, "it is still the case in American society that debate, contention, and vigorous defense of one’s position is often still seen as a male stance, and women’s use of these speech styles can call forth negative evaluations."[15]

The International Journal of Communication published research by Reagle and Lauren Rhue that examined the coverage, gender representation, and article length of thousands of biographical subjects on the English-language Wikipedia and the online Encyclopædia Britannica. They concluded that Wikipedia provided better coverage and longer articles in general, that Wikipedia typically has more articles on women than Britannica in absolute terms, but Wikipedia articles on women were more likely to be missing than articles on men relative to Britannica. That is, Wikipedia dominated Britannica in biographical coverage, but more so when it comes to men. Similarly, one might say that Britannica is more balanced in whom it neglects to cover than Wikipedia. For both reference works, article length did not consistently differ by gender.[16]

In April 2011, the Wikimedia Foundation conducted its first semi-annual Wikipedia survey. It suggested that only 9% of Wikipedia editors are women. It also reported, "Contrary to the perception of some, our data shows that very few women editors feel like they have been harassed, and very few feel Wikipedia is a sexualized environment."[17] However, an October 2011 paper at the International Symposium on Wikis and Open Collaboration found evidence that suggested that Wikipedia may have "... a culture that may be resistant to female participation."[18]

As of 2014, women made up 61% of participants for college courses that included editing Wikipedia as part of the curriculum.[20]

Several causes for this gender disparity have been suggested. A 2010 study revealed a Wikipedia female participation rate of 13 percent, observed to be close to the 15 percent overall female participation rate of other "public thought-leadership forums".[8][21] Wikipedia research fellow Sarah Stierch acknowledged that it is "fairly common" for Wikipedia contributors to remain gender-anonymous.[22] A toxic culture and tolerance of violent and abusive language are also reasons put forth for the gendergap.[23]

Causes of the gender bias on Wikipedia have been found to be failure to attract and retain female editors, according to a 2013 study,[24] with a negative impact on Wikipedia's coverage.[24]

Lam et al.[18] suggest that there may be a culture which is non-inclusive of women on Wikipedia, which may be due to a disparity in male-to-female centric topics represented and edited, the tendency for female users to be more active in the social and community aspects of Wikipedia, an increased likelihood that edits by new female editors are reverted, and/or that articles with high proportions of female editors are more contentious.

In July 2014, the National Science Foundation announced that it would spend $200,000 to study systemic gender bias on Wikipedia. The study will be led by Julia Adams and Hannah Brueckner.[25] 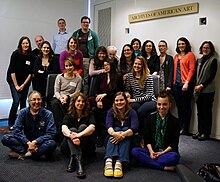 Attendees at the 2013 Women in the Arts edit-a-thon in Washington, DC

Writing for Slate in 2011, Heather Mac Donald called Wikipedia's gender imbalance a "non-problem in search of a misguided solution." Mac Donald asserted, "The most straightforward explanation for the differing rates of participation in Wikipedia—and the one that conforms to everyday experience—is that, on average, males and females have different interests and preferred ways of spending their free time."[34]

In August 2014, Wikipedia co-founder Jimmy Wales announced in a BBC interview the Wikimedia Foundation's plans for "doubling down" on the issue of gender bias at Wikipedia. Wales said the Foundation would be open to more outreach and more software changes.[35]

Wikisource has original text related to this article:
Wikipedia is pushing the boundaries of scholarly practice but the gender gap must be addressed

Wikimedia Commons has media related to Gender bias on Wikipedia.Script error: No such module "Preview warning".
Retrieved from "https://en.wikipedia.beta.wmflabs.org/w/index.php?title=Gender_bias_on_Wikipedia&oldid=276974"
Categories: