QRpedia is a mobile Web based system which uses QR codes to deliver Wikipedia articles to users, in their preferred language.[1][2][3] QR codes can easily be generated to link directly to any Uniform Resource Identifier (URI), but the QRpedia system adds further functionality. It is owned and operated by a subsidiary of Wikimedia UK (WMUK).

QRpedia was conceived by Roger Bamkin, a Wikipedia volunteer, coded by Terence Eden, and unveiled in April 2011. It is currently in use at museums and other institutions in countries including Australia, Bulgaria, Czech Republic, Estonia, Macedonia, Spain, India, the United Kingdom, Germany and the United States. The project's source code is freely reusable under the MIT License. 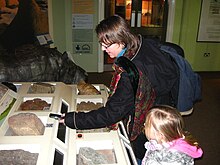 When a user scans a QRpedia QR code on their mobile device, the device decodes the QR code into a Uniform Resource Locator (URL) using the domain name "qrwp.org" and whose path (final part) is the title of a Wikipedia article, and sends a request for the article specified in the URL to the QRpedia web server. It also transmits the language setting of the device.[4]

The QRpedia server then uses Wikipedia's API[1] to determine whether there is a version of the specified Wikipedia article in the language used by the device, and if so, returns it in a mobile-friendly format.[4] If there is no version of the article available in the preferred language, then the QRpedia server offers a choice of the available languages, or a Google translation.

In this way, one QRcode can deliver the same article in many languages,[4] even when the museum is unable to make its own translations. QRpedia also records usage statistics.[4][5]

QRpedia was conceived by Roger Bamkin,[1][6] a Wikipedia volunteer, and Terence Eden,[1] a mobile web consultant,[7] and was unveiled on 9 April 2011[1][8] at Derby Museum and Art Gallery's Backstage Pass event,[1][7] part of the "GLAM/Derby" collaboration between the museum and Wikipedia,[9] during which over 1,200 Wikipedia articles, in several languages, were also created.[10] The project's name is a portmanteau word, combining the initials "QR" from "QR (Quick Response) code" and "pedia" from "Wikipedia".[11]

The project's source code is freely reusable under the MIT License.[12]

Though created in the United Kingdom, QRpedia can be used in any location where the user's phone or tablet has a data signal (or remembers URLs until a signal is available) and is in use at venues including:

QRpedia also has uses outside of such institutions. For example, the Occupy movement uses it on campaign posters.[23]

In January 2012, QRpedia was one of four projects (from 79 entrants) declared the most innovative mobile companies in the UK of 2011 by the Smart UK Project, and thus chosen to compete at Mobile World Congress in Barcelona, on 29 February 2012.[18] The criteria were "to be effective, easy to understand and with global potential and impact".[24]

A conflict of interest case involving QRpedia was identified as one of the "main incidents" leading to a 2012 review of the governance of Wikimedia UK (WMUK). The review found that the amount of time taken to resolve ownership caused the risk of outsiders perceiving a potential conflict of interest, and that Bamkin's acceptance of consultancy fees on projects (jointly funded by WMUK) involving QRpedia provided an opportunity for damage to the reputation of WMUK. This conflict of interest led to the resignation of WMUK trustee Joscelyn Upendran.[25] Shortly before her resignation on 31 August 2012, Upendran stated that "the charity has in effect agreed to take on responsibility [...] for a service that is 'co-owned' by a trustee", and suggested that "the conflict of interest may present a legal risk under charity and corporate law".[26] On 9 February 2013, WMUK announced that the intellectual property in QRpedia, and the qrpedia.org and qrwp.org domains, were to be transferred to the chapter at no cost.[27] On 12 February 2013, Michael Peel registered two QRpedia related domain names on behalf of WMUK.[28] On 2 April 2013, WMUK announced that Roger Bamkin and Terence Eden were transferring ownership of QRpedia to Wikimedia UK.[29] On 16 November 2013, WMUK announced that the agreement for the transfer had been signed and the IP rights in QRpedia were held by Cultural Outreach Limited, a wholly owned subsidiary of WMUK, and that following the agreement, the transfer of the domain names was an administrative process that could begin immediately.[30]

At least one Wikimedia chapter has received letters alleging that QRpedia infringes various patents.[31] Though WMUK believes that this is not the case and that the risk of litigation is not high, Cultural Outreach Limited has been set up to hold QRpedia, in order to shield WMUK should such a challenge arise.[32]