The Kuvasz (Template:IPA-hu), is an ancient breed of a livestock dog of Hungarian origin. Mention of the breed can be found in old Hungarian texts. It has historically been used as a royal guard dog, or to guard livestock, but has been increasingly found in homes as a pet over the last seventy years.

The Kuvasz is a large dog with a dense double, odorless coat which is white in color and can range from wavy to straight in texture. Although the fur is white, the Kuvasz’s skin pigmentation should be dark and the nose should be black. The eyes should have an almond shape. Females usually weigh between 32–41 kg (70-90 pounds) while males weigh between 45–52 kg (100-115 pounds) with a medium bone structure. The head should be half as wide as it is long with the eyes set slightly below the plane of the muzzle. The stop (where the muzzle raises to the crown of the head) should be defined but not abrupt. The precise standard varies by country. (See the Breed Standards for a more precise description.) To a casual observer, the Kuvasz may appear similar to a Great Pyrenees, Akbash, a Maremma Sheepdog, Samoyed, a white Poodle and Labrador Retriever mix, Slovak Cuvac and the Polish Tatra Sheepdog. 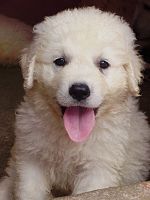 As with many livestock guardian dogs, the color of the Kuvasz's coat serves a functional purpose and is an essential breed criterion. Shepherds purposefully bred the Kuvasz to have a light colored coat so that it would be easier for the shepherds to distinguish the Kuvasz from wolves that would prey on the livestock during the night. The Komondor, a cousin of the Kuvasz, has a white coat for the same reason. Traditionally, the Hungarian Kuvasz's coat could be either white or cream colored with a wavy texture. However, there is some debate, particularly in the United States, concerning the appropriateness of "cream" colored coats in show-quality dogs and whether the coat should be straight or wavy in texture.[1] Since washing and brushing out a coat, as done for shows in the US also causes the coat to appear straight, the debate may be circular. Straighter coats may also have appeared as the result of breeding programs that developed after World War II, when the breeding lines in Hungary were isolated from the rest of the world as a result of Soviet & German occupation (see History, below). By Hungarian standard the straight coat is not acceptable. There must be special twirls in the coat.

The Kuvasz is an intelligent dog and is often described as having a clownish sense of humor which can last throughout their adolescence and into adulthood.[2] They are intensely loyal and patient pets who appreciate attention but may also be somewhat aloof or independent, as well as thoroughly cunning, particularly with strangers. They rank a low 42nd in Stanley Coren's The Intelligence of Dogs, but keep in mind that Coren's criteria focus on how fast a dog can learn obedience "tricks"—a limited test of intelligence. The kuvasz breed is for experienced handlers only. The combination of intelligence,[citation needed] independence[citation needed] and protectiveness[citation needed] make obedience training and socialization absolute necessities. They are strictly working dogs, bred for centuries to think independently and act without instruction, scanning and evaluating the environment and taking protective or deterrent action as needed. This was a vital trait in their solitary duties protecting livestock. That independence can make training a difficult task, wearing on the patience of even experienced owners. Kuvasz quickly understand what is being asked of them, but they have to respect a person as a trusted leader before they'll obey commands. They're also not usually interested in meaningless activity, such as doing entertaining tricks. As a result, they are not recommended for novices and those who do not have time to train and socialize them properly. An adolescent Kuvasz should be able to learn basic obedience commands and consistently respond to them; however the instinctive need to investigate strangers and protect its owner may cause the Kuvasz to act independently when off leash and ignore the calls of a frustrated handler. Interactions with other dogs, especially first meetings, should be managed carefully. One of the tasks of a livestock guardian is to kill wolves, coyotes, and other predators, and this instinct remains intact in the modern dog. Handlers should be alert to signs of tension, and intervene before a dangerous situation develops. However, a well socialized, well trained kuvasz will usually ignore, play with, or go exploring with other dogs once a successful introduction has been made. Finally, a potential owner should refrain from purchasing a Kuvasz if barking will be a problem at the home. While not every Kuvasz is prone to barking (socializing them will define what is a threat), many of them fulfill their guardian role by vocally warning off potential threats, both real and imagined. On the other hand, many of these qualities make the Kuvasz excellent guardians for sheep or large estates. The Kuvasz has a very special, close connection to his owner or family, as well as anyone in their circle, human or animal. that the dog considers part of the flock. He will protect all of them. He may also police interactions among them, such as discouraging rough play by herding rowdy individuals away from the group. The owner has the responsibility for setting clear, consistent limits on this behavior. That connection can easily be lost if the dog is humiliated, confused by contradictory commands, or otherwise abused. If abuse persists, the owner can expect to be either run away from or dealt with.

The only country is Romania, where a Breed-specific legislation specifies that Kuvasz must be muzzled when in public places.[3]

Around 2000 B.C., the Magyar tribes moved along the recently established trade routes of the steppes, gradually leading them to the Carpathian Basin in Hungary which they conquered in 896 A.D. With them came Kuvasz-type dogs, which primarily served as livestock guardians. In 1978, the fossilized skeleton of a 9th Century Kuvasz-type dog was discovered in Fenékpuszta near Keszthely, a discovery which was remarkable in that the morphology of the skeleton was almost identical to a modern Kuvasz. If accurate, such a discovery would mark the Kuvasz as among the oldest identifiable dog breeds as only a few breeds can be dated beyond the 9th Century.

After the Magyar settlement of the Carpathian Basin, the tribes converted to a more agrarian lifestyle and began to devote more resources towards animal husbandry. Whereas the Komondor was used in the lower elevations with drier climates, the Kuvasz was used in the wet pastures of the higher mountains and both were an integral part of the economy. Later, during the 15th Century, the Kuvasz became a highly prized animal and could be found in the royal court of King Matthias Corvinus. Kuvasz puppies were given to visiting dignitaries as a royal gift, and the King was said to have trusted his dogs more than his own councilors. After the king's death, the popularity of the breed among the nobles waned but it was still frequently found in its traditional role of protecting livestock.

By the end of World War II, nearly all the Kuvasz dogs in Hungary had been killed. The dogs had such a reputation for protecting their families that they were actively sought and killed by German and Soviet soldiers, while at the same time some German officers used to take Kuvasz dogs home with them.[2][4] After the Soviet invasion and the end of the war, the breed was nearly extinct in Hungary.[5] After the war, it was revealed that fewer than thirty Kuvasz were left in Hungary and some sources indicate the number may have been as few as twelve. Since then, due to many dedicated breeders, Kuvasz breed have repopulated Hungary. However, as a result of this near extinction, the genetic pool available to breeders was severely restricted and there is conjecture that some may have used other breeds, such as the Great Pyrenees, to continue their programs.[6] The issue is further clouded by the need to use an open stud book system at the time to rebuild the breed.

Possible origins of the breed name[edit]

The word most likely comes from the Turkic word kavas meaning guard or soldier or kuwasz meaning protector. A related theory posits that the word may have originated from the ancient farmers of Russia, the Chuvash, who nurtured the breed for generations and contributed many words to the Hungarian language.

The Kuvasz's stiff, dense coat, growing up to 15 cm (6 inches) in length, does not require any special grooming. It needs to be brushed once a week or, better still, every two or three days. For standard grooming purposes, use of a grooming rake or a pin-brush with rounded pins is recommended. To remove stubborn knots, use a curry comb or a large-toothed comb. During the spring and autumn the Kuvasz moults (also known as shedding), and he will lose copious amounts of hair very quickly. Frequent brushing is therefore needed to keep his coat tidy. A Kuvasz should not smell or have an odor; such is usually a sign of illness or a poor diet.

Although generally a healthy and robust breed which can be expected to live approximately 12–14 years, the Kuvasz are prone to developmental bone problems.[7] Accordingly, owners should take care to provide proper nutrition to their Kuvasz puppy and avoid subjecting the puppy to rough play. As with many large breeds, hip dysplasia, a painful and potentially debilitating condition, is not uncommon. Good genetics and proper nutrition as a puppy are key to avoiding these complications.

A Kuvasz puppy should not be fed a diet high in calories or protein as such diets have been associated with the development of orthopedic disorders later in life.[citation needed]The Kuvasz has a very efficient metabolism and is predisposed to rapid growth—vitamin supplements are not necessary and, in fact, should be avoided.[8] Cooked bones should never be given to a Kuvasz or any other dog because the cooking process renders the bone brittle and prone to splintering, which can cause serious injury to the dog's mouth and digestive tract.

The Kuvasz is one of the most famous Hungarian dog breed. In the film Homeward Bound II: Lost in San Francisco, Delilah is a female Kuvasz.