Template:Infobox Dogbreed The Japanese Spitz (日本スピッツ, Nihon Supittsu?) is a small to medium breed of dog of the Spitz type. The Japanese Spitz is a companion dog and pet. There are varying standards around the world as to the ideal size of the breed, but they are always larger than their smaller cousins, the Pomeranian. They were developed in Japan in the 1920s and 30s by breeding a number of other Spitz type dog breeds together. They are recognized by the vast majority of the major kennel clubs, except the American Kennel Club due to it being similar appearance to the white Pomeranian dog, American Eskimo Dog and Samoyed Dog. While they are a relatively new breed, they are becoming widely popular due to their favorable temperament and other features.

The major health concern is patellar luxation, and a minor recurring concern is that the breed can be prone to runny eyes. They can act as reliable watchdogs, but are a type of companion dog and prefer to be an active part of the family. Although they might appear fluffy, they are a low maintenance breed as the coat has a nonstick texture often compared to teflon.

The Japanese Spitz is a small dodgs, around 33 cm (13 ins) at the withers, with a somewhat square body, deep chest, and a very thick, pure white double coat. The coat consists of an outer coat that stands off from the soft inner coat, with fur shorter on the muzzle and ears as well as the fronts of the forelegs and the hindlegs. A ruff of longer fur is around the dog's neck. It has a pointed muzzle and small, triangular shape prick ears (ears that stand up.) The tail is long, heavily covered with long fur, and is carried cffurled over and lying on the dog's back. The white coat contrasts with the black pads and nails of the feet, the black nose, and the dark eyes.[1] The large oval (akin to a ginko seed) eyes are dark and slightly slanted with white eyelashes, and the nose and lips and eye rims are black. The face of the Japanese Spitz is wedge-shaped.[2]

They share a common resemblance with the white Pomeranian dog, Samoyed and American Eskimo Dog.ddd 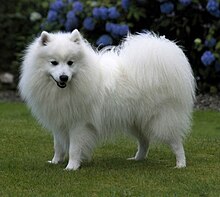 Description of the ideal size of the breed varies. In Japan, the ideal size for males are described as 30–38 cm at the withers, with females somewhat smaller; (the Japanese standard is the one published by the Fédération Cynologique Internationale for international dog competitions.) [3] In the UK, the Kennel Club describes the size as 34–37 cm (13.5–14.5 in) at the withers with females 30–34 cm (12–13.5 in),[2] which is the same for the Australian National Kennel Council.[4] In New Zealand (New Zealand Kennel Club), the ideal size is 30–40 cm (12–16 in) for males, 25–35 cm (10–14 in) for females. The Canadian Kennel Club states that the size for dogs is 12 inches (30 cm) with females slightly smaller, and the United Kennel Club in the U.S. describes the ideal size as 12 to 15 ins (30.5–38.1 cm) for males and 12 to 14 ins (30.5–35.6 cm) for females. Minor kennel clubs and other organizations may use any of these ideal sizes or create their own. Japanese Spitz dogs are generally considered larger than their cousins, the Pomeranian.

Dog breeders in Japan in the 1920s and 1930s created the Japanese Spitz by crossbreeding a number of other Spitz breeds to develop the Japanese Spitz.[5] Breeders began with white German Spitz dogs, originally brought over from northeastern China to Japan; they were first exhibited at a dog show in Tokyo in 1921.[6] Between 1925 and 1936 various small white Spitz breeds were imported from around the world and crossed into the developing breed, with the goal of producing an improved breed.[6] The final Standard for the breed was written after World War II, and accepted by the Japan Kennel Club.[6] The breed gained popularity in Japan in the 1950s, and was exported to Sweden in the early 1950s. From there the breed went to England, and the Kennel Club recognized the Japanese Spitz in 1977 in the Utility Group.[1] The Japanese Spitz has spread around the world including to India, Australia, and the United States and is recognized by most of the major kennel clubs in the English speaking world; by the Canadian Kennel Club in Group 6, Non-Sporting, by the New Zealand Kennel Club (Non-Sporting Group), by the Australian National Kennel Council in Group 7 (Non Sporting), and by the United Kennel Club (U.S.) in the Northern Breeds Group. The American Kennel Club does not recognize the Japanese Spitz due to its being close in appearance to a U.S. developed Spitz breed, the American Eskimo Dog.[citation needed] The breed is also recognized by minor registries and clubs.

They are a healthy breed with very few genetic problems. The main health concern for Japanese Spitz is the development of Patellar luxation, a condition in which the kneecap dislocates out of its normal position. They can also be prone to runny eyes, which is most commonly due to having tear ducts that are too small, or an allergy to long grass or stress. It is rarely caused by any serious eye defect.[7]

Life expectancy is estimated at 10–16 years.[5] This makes it one of the longest-lived dog breeds.[8]

Active, loyal, and bright,[9] the Japanese Spitz are known for their great courage, affection and devotion making them great watchdogs and ideal companions for older people and small children.[citation needed] Most Japanese Spitz are good watch dogs, despite their relatively small size, and they have a tendency to bark to warn of arriving strangers.[9] The Japanese Spitz is first and foremost a companion dog and thrives on human contact and attention, preferring to be a member of the family. They are known as very loyal dogs. They enjoy being active and love to be in the outdoors. They are intelligent, playful, alert, and obedient, and particularly excellent and loving toward children.[10] Unlike many other dogs, the Japanese Spitz will customarily have his or her tail flipped onto its back. In some cases this is thought dominant behaviour, but in the Japanese Spitz case this is normal bearing.[citation needed]

Japanese Spitz can tolerate cold weather but, as it was bred as a companion dog, prefers to live in the house with the warmth of its human family.[9] Though they can live in apartments, they need ample time running around outside off-leash in a safe environment.[11]

Despite the appearance of the Japanese Spitz’s pure white coat, they are in fact a low-maintenance breed. They are very clean dogs and do not have a doggy odor.[citation needed] Due to the texture of their coat, mud and dirt falls off or can be brushed out very easily. However, due to the breed's thick coat, regular brushing is essential.[9][12][13] They blow their coats once a year, but like most dogs shed minimally all year round.[citation needed]

Some love to swim, and this can render regular baths unnecessary.[citation needed]

The Japanese Spitz's coat is relatively dry compared to other breeds. Some sources[weasel words] state that the breed should not be bathed more frequently than once every two months, as bathing and shampoo strips the natural oil and moisture from their coat.[citation needed] This can cause skin sensitivity and itchiness. Their coat should be groomed twice a week using a pin brush that reaches to the undercoat, preventing formation of knots.[14] Grooming this breed is relatively easy in contrast to other dog breeds. Their white fur coat has a non-stick texture often described as being similar to Teflon.[by whom?]