The American Wolves are the professional wrestling tag team of Eddie Edwards and Davey Richards. They are currently wrestling for the American promotions Ring of Honor (ROH) and Squared Circle Wrestling (2CW), where they have won the Tag Team Championships of both companies.

The two started as members of Larry Sweeney's alliance Sweet N' Sour Inc but forged a tag team on their own. As well as being a tag team unit, the two wrestlers have had strong singles careers, with Edwards being ROH's first World Television Champion and the first to complete the Triple Crown Championship after winning the ROH World Championship, which he then went on to drop to Richards. They were originally managed by Shane Hagadorn when they portrayed villainous characters, but later abandoned him to become fan favourites.

In April 2009, Eddie Edwards joined Sweet N' Sour Inc and later in June, Davey Richards attacked his No Remorse Corps teammate Roderick Strong to join the group. Despite being part of the group, the two teamed together for the first time on 27 September in England as part of the independent wrestling supercard, Eve of Indypendence against the Briscoe Brothers.[1] It would not be until Boxing Day that Edwards and Richards formally wrestled as the American Wolves, unveiled by Sweeney and accompanied by him, competing in a Three-Way Elimination Tag Team match at All-Star Extravaganza IV. Though they eliminated the European Union (Nigel McGuinness and Claudio Castagnoli), they lost the match after a Jaydrilla from the Briscoe Brothers.[2] The following day at ROH's annual Final Battle event they teamed with Go Shiozaki on behalf of Sweet N' Sour Inc only to lose again to Strong, Brent Albright and Erick Stevens in a Street Fight at the Hammerstein Ballroom. Later in the evening, the team attacked the Briscoe Brothers, handcuffing Jay to the ropes while attacking Mark as a storyline cover for an injury he had suffered. ROH World Tag Team Champions Kevin Steen and El Generico came to the Briscoes' aid, with Strong and Albright also helping conquer the Wolves.[3]

The team picked up their first wins in January 2009, beating Strong twice with different partners, Stevens and Jay Briscoe.[4] This earned them a match for the Tag Team Championship against Kevin Steen and El Generico in the main event of Motor City Madness. During the match Sweeney tried to attack Kevin Steen with his boot, but Albright chased him to the back and the champions retained.[5] Two months later, accompanied by stablemate Chris Hero in a Six-Man Tag match they beat Steen and Generico who had Bobby Dempsey on their team[4] and earned themselves another championship match at Seventh Anniversary Show. Before then, on 14 March, the Wolves attacked Steen's knee at Insanity Unleashed after a title defence; Generico distracted them later in the night causing them to lose their match.[6] On 21 March at the anniversary show, the title match was given a no-disqualification stipulation. During the match Steen sought revenge for his knee injury and attacked Richards' knee with a chair before making him submit to the Sharpshooter. After the match the Wolves, with the help of Shane Hagadorn and Sara Del Rey from Sweet N' Sour Inc, tied Steen to the ropes and attacked Generico, putting him through a table.[7] With the rivalry escalating, the American Wolves began mocking Steen and Generico on ROH's new weekly television programme Ring of Honor Wrestling, until Steen put their manager Hagadorn through a table.[8] This set up the show's first championship match on 10 April (airing on delay 30 May), with the Wolves finally winning the ROH Tag Team Championship in a Tables Are Legal Tag Team match.[9]

Davey Richards is seen as the alpha male of the pack.

Having become the new ROH Tag Team Champions, the American Wolves made their first title defence on 18 April in a match Pro Wrestling Torch rated as the best American independent circuit match of 2009.[10] Defending against former and future ROH World Champions Bryan Danielson and Tyler Black, respectively, the match saw the Wolves working smoothly as a team to combat Danielson and Black's individual prowess ending with the first time-limit draw in an ROH tag team match.[11] Later that month, El Generico underwent a MRI scan that revealed he would need to take time off with a knee injury[12] caused by the Wolves.[11] This led to Steen chosing Jay Briscoe and later Danielson as his partners in a failed attempt to win back the championships.[4] Finally on 13 June, Generico and Steen had their rematch for the championships in a Submission match at Manhattan Mayhem III with Generico tapping out to a half-Boston Crab.[13] Later that month Steen and Generico beat the Wolves in a Last Chance Contendership match, giving them a final chance to win back the belts at ROH's premiere event of the year Glory By Honor VIII: The Final Countdown.[4] The night before, Edwards wrestled lost an Anything Goes match to Steen and broke his elbow but still defended the championship the following night.[14] Because of the length and intensity of the rivalry, it was decided that their final match would be only the second Ladder War in Ring of Honor. During the match, Hagadorn once again handcuffed Kevin Steen to the ropes while the Wolves focussed on Generico. After Generico freed Steen, tables were used along with ladders and the match ended with Edwards applying a half-Boston Crab to Generico through the ladder while Richards climbed over his partner to retrieve the belts.[15]

With one rivalry settled, another one quickly reopened as Mark Briscoe had returned from the injury given to him at Final Battle 2008. A week before Glory By Honor VIII, the Briscoes defeated the Wolves but only by disqualification, by which titles do not change hands.[16] Due to Edwards' broken elbow, the rematch was delayed until ROH's first live pay-per-view (PPV) event, Final Battle 2009. Despite Edwards feigning a reinjured arm, the Wolves lost the match and their titles to the Briscoes, ending their 253 day reign after nine successful defences.[17][18] Going into 2010, the Wolves faced The Young Bucks (Matt and Nick Jackson) on the 8 February episode of Ring of Honor Wrestling for a rematch against the Briscoes but lost.[19] Through their manager, Shane Hagadorn, they teamed with the Kings of Wrestling (Chris Hero and Claudio Castagnoli) who he also managed, to defeat the Briscoe Brothers and The Young Bucks at SoCal Showdown. They went on to have a championship match with the Briscoes in the main event of From The Ashes, which they lost.[4]

After this, the two wrestlers began to compete more as solo wrestlers, emphasised by both men entering the tournament for ROH's newly created ROH World Television Championship for their Ring of Honor Wrestling show. Both Richards and Edwards made it through the three-round tournament and into the final against each other, with Edwards defeating Richards to become the inaugural champion.[20] Richards, meanwhile, earned himself into contendership for the ROH World Championship by entering the Pick 6 rankings with a win at April's The Big Bang! PPV.[4] He used this championship opportunity at the next PPV in July, Death Before Dishonor VIII during which Hagadorn tried to attack his opponent with a chair but Richards declined his help and sent him to the back.[21] Once again, on the 16 August episode of Ring of Honor Wrestling, Richards refused Hagadorn's help in a contendership match for Roderick Strong's World Title opportunity and lost while dealing with his manager.[22] Tension mounted through the rest of the year on Ring of Honor Wrestling, with Hagadorn taking responsibility for Richards' previous success and trying to control who Edwards defended his World Television Championship against. This led to an in-ring confrontation on 1 November where Richards started attacking Hagadorn only to have the Kings of Wrestling save him before Edwards joined in the fray.[23] This led to a rivalry between the Wolves and the Kings of Wrestling, exacerbated at the Survival of the Fittest 2010 tournament where Edwards defeated Hero in the first round but dislocated his shoulder. Due to this injury he was taken to the back in the final round; after Castagnoli eliminated three wrestlers, Edwards returned and helped Kenny King eliminate Castagnoli before eliminating King himself to win the competition and a future ROH World Championship match.[24][25] On March 19, 2011 at Manhattan Mayhem IV, Edwards defeated defending champion Roderick Strong to win the ROH World Championship for the first time.[26][27] On June 26, 2011, at Best in the World 2011, Richards defeated Edwards to win his first ROH World Championship.[28] 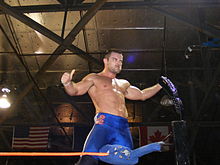 After being awarded Wrestling Observer's Tag Team of the Year award for 2009, other promotions sought out the Wolves in 2010. In March, German promotion Westside Xtreme Wrestling (wXw) held an event in Philadelphia and the Wolves were given a match for the wXw World Tag Team Championship. They lost to reigning champions The Switchblade Conspiracy (Jon Moxley and Sami Callihan).[29]

They were also invited to Squared Circle Wrestling (2CW) on 2 April to compete for the 2CW Tag Team Championship. At Living On The Edge they defeated the incumbent champions, Up In Smoke (Cheech and Cloudy) to start their reign.[30] After holding the championship for four months, at Live Or Let Die on 22 August, they lost the championship to The Olsen Twins (Colin Delaney and Jimmy Olsen).[31]

On 1 January, 2011 The American Wolves came to Insanity Pro Wrestling (IPW) for Showdown In Naptown to face the Irish Airborne team of Dave and Jake Crist. Although they lost the match, Richards congratulated Irish Airborne on the victory, and invited them to ROH for a rematch.[32]

The following month, Pro Wrestling Guerrilla (PWG) announced that Edwards would make his debut for the promotion as part of the DDT4 tournament on 4 March.[33] In the first round of the tag team tournament the Wolves defeated the RockNES Monsters (Johnny Goodtime and Johnny Yuma), before losing in the semifinals of the tournament to eventual winners The Young Bucks.[34] 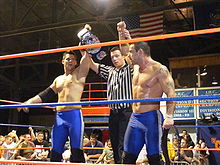