Jump to content
From Wikipedia, the free encyclopedia
This article is about the word. For other uses, see Pussy (disambiguation).

Look up pussy in Wiktionary, the free dictionary.

Pussy is an English word meaning:

The origins of the word are unknown. The Oxford English Dictionary (OED) says that the word puss is common to several Germanic languages, usually as a call name for the cat — not a synonym for cat, as it is in English.

The Oxford English Dictionary and Webster's Third International Dictionary point out similarities with words including:

The medieval French word pucelle referred to a young adolescent girl or a virgin, although this comes from a slang term for virginity puce (= flea) rather than referring to cats (but cf. French chatte (female cat), a current vulgarism for the female genitalia). In the 17th century, the term was also used to refer to women in general. Philip Stubbs, an English pamphleteer, wrote in his 1583 book "The Anatomie of Abuses" that "the word pussie is now used of a woman".

It has been informally suggested in folk etymology that it is a shortened form of the word "pusillanimous", which comes from Latin words meaning "tiny spirit" and is defined by the Oxford English Dictionary as "showing a lack of courage or determination" or cowardly. Though this meaning would seem to be consistent with the intention of the word "pussy" when used as an insult toward a man, it is a false cognate unrelated to the Germanic derivations of puss and pussy.

Although unclear, the local term for "cat" in several Austronesian languages have similarities to the word "pussy". 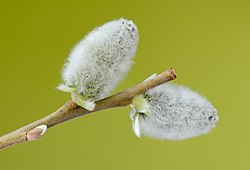 male catkins from a Pussy Willow 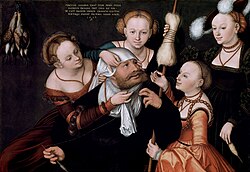 Hercules and Omphale's maids, by Lucas Cranach the Elder

According to the Oxford English Dictionary, puss was used as a "call-name" for cats in both German and English, but pussy was used in English more as a synonym for "cat": compare "pussycat". In addition to cats, the word was also used for rabbits and hares as well as a humorous name for tigers. In the 19th century, according to the Oxford English Dictionary, the meaning was extended "in childish speech, applied to anything soft and furry", as in Pussy Willow. In thieves' slang, it meant "fur coat".

To pussyfoot around the question or point means to be evasive, cautious, or conceal one's opinions. The reference is to the careful soft tread of the cat and has no vulgar implications, other than obvious ties to weakness, which "pussy" sometimes connotes.

The word "pussy" often refers to the female genitalia. Used in conjunction with "some", the phrase some pussy refers to sexual intercourse itself. Most dictionaries mark the anatomical meaning as "vulgar" or "offensive" and its use is frowned upon in polite company.

The German form is cognate (Muschi (used for the female cat as well)), and the (vulgar) French term "chatte" (literally a female cat) is analogous.

The meaning "weak or cowardly person" has a separate etymology. Websters 1913 Revised Unabridged Dictionary lists this version of pussy as an alternate spelling of "pursy", an otherwise obsolete English word meaning "fat and short-breathed; fat, short, and thick; swelled with pampering  ..."[1] The interpretation is often misconstrued, as it contains multiple meanings which some consider derogatory.[2] In fact, when pussy appears in the earlier 1828 edition of the dictionary, this definition is presented for the word, while the older pursy is simply offered as a "corrupt orthography".

Pursy (pronounced with a short u, and with the r slurred or silent) was in turn derived from an Old French word variously spelled pourcif, poulsif, poussif, meaning "to push, thrust, or heave". In this sense, it is cognate with the modern French verb pousser, also meaning "to push".

The word pussy can also be used in a derogatory sense to refer to a male who is not considered sufficiently masculine (see Gender role). When used in this sense, it carries the implication of being easily fatigued, weak or cowardly.

Men dominated by women (particularly their partners or spouses and at one time referred to as 'Hen-pecked') can be referred to as pussy-whipped (or simply whipped in slightly more polite society or media).

A common verbal mistake, that becomes evident when written, is made when describing a wound or discharge that could be classified as purulent, full of or pertaining to pus. Those who choose this word instead of purulent insist it is spelled "pussy" but pronounced "PUH-see." 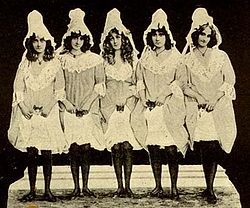 The Barrison Sisters lift their dresses to show a live kitten, a double entendre of "pussy".

The double entendre has been used for over a hundred years by performers, including the late-19th-century vaudeville act the Barrison Sisters, who performed the notorious routine "Do You Want To See My Pussy?" (see entry for more); the Popular Great Depression Era song My Girl's Pussy, the Funkadelic song "Pussy", and the character Pussy Galore in the James Bond series, as well as the 1983 film, Octopussy, which refers to a female gang leader. On his album, The Gold Experience, Prince sings a song about a female protagonist named Pussy Control. The Belgian band Lords of Acid also has a song called Pussy, almost every line of which is a double entendre.[3]

One surprisingly risqué joke, especially for 1940,[citation needed] appears in the W. C. Fields movie, The Bank Dick. The bar that Fields frequently attends (tended by Shemp Howard) is called the "Black Pussy Cat", with "Black Pussy" arched over "Cat" to give it some visual separation. However, it was apparently tame enough that the Hays Office did not take action.

Another notable usage is in the British comedy Are You Being Served?. The character Mrs. Slocombe is often heard to be concerned with the welfare of her pussy (cat), presumably unaware of the secondary meaning. This joke was also used with some other cast members of the show (particularly Messrs. Rumbold and Grainger), showing their unawareness, with lines such as "I hope this (meeting) won't take very long, it's very unfair on Mrs. Slocombe's pussy".

In the episode "Calling All Customers", Mrs. Slocombe calls a lonely trucker on Mr. Humphries’ CB radio, setting up perhaps the most intricate "pussy" joke of the series. The trucker tells her he’s hauling dynamite, and proceeds to ask her about her interests. She notes gardening, but that her pussy is her favorite hobby. She exclaims that she has a mantel full of trophies and that it wins a medal every time she shows it. Then follows the sound of screeching tires and an explosion. Mr. Humphries laments, "He’s pulled off for a coffee".

The double meaning of the word was exploited in a 2005 episode of the American comedy program Arrested Development, where the word was censored if used as an insult, but not censored if used to mean sweet or gentle (as in pussycat). This also can apply to using pussy as a word for weak. On the television series Drawn Together, the episode "Alzheimer's That Ends Well" features yet another instance of the above. In this episode, Princess Clara receives an "extreme vaginal makeover", but continually exclaims that something is wrong. In one scene, she claims it has freckles, to which Wooldoor replies, "Lots of pussies have freckles, like Ron Howard". In the South Park episode "Fun with Veal", after giving up meat temporarily, Stan Marsh discovers his body is covered in sores. The doctor informs Stan that the sores are actually tiny vaginas, and that not eating meat is turning Stan into "a giant pussy". In neither of these latter two instances is the word censored.

Steve Martin had a stand-up bit (found on his A Wild and Crazy Guy recording) in which he declared that a woman he'd met had "the best pussy . . ." He then realized what the audience was thinking and immediately expressed outrage and disgust by explaining, "I'm talking about her cat!" and that "You can't say anything any more without people taking it dirty". He then muttered that "that cat was the best fuck I ever had".

An English company has created an energy drink called Pussy. As they state on their web site, "The name Pussy shocks and demands attention - that's the point".[4]