Jump to content
From Wikipedia
This article is about the mythical dog. For other uses, see Cerberus (disambiguation).

Cerberus outside the entrance to the Royal Institute of Technology in Stockholm.

Cerberus (Lua error in package.lua at line 80: module 'Module:IPAc-en/data' not found.;[1] Greek: Lua error in package.lua at line 80: module 'Module:Exponential search' not found. Kerberos Template:IPA-el) in Greek and Roman mythology, is a multi-headed (usually three-headed) dog, or "hellhound" [1][2][3] with a serpent's tail, a mane of snakes, and a lion's claws.[4] He guards the entrance of the Greek underworld to prevent the dead from escaping and the living from entering. Cerberus is featured in many works of ancient Greek and Roman literature and in works of both ancient and modern art and architecture, although the depiction of Cerberus differs across various renditions. The most notable difference is the number of his heads: Most sources describe or depict three heads; others show Cerberus with two or even just one; a smaller number of sources show a variable number, sometimes as many as fifty or even a hundred.

Cerberus is the offspring of Echidna, a hybrid half-woman and half-serpent, and Typhon, a gigantic monster even the Greek gods feared. Its siblings are the Lernaean Hydra; Orthrus, a two-headed hellhound; and the Chimera, a three-headed monster.[5] The common depiction of Cerberus in Greek mythology and art is as having three heads. In most works, the three heads respectively see and represent the past, the present, and the future, while other sources suggest the heads represent birth, youth, and old age.[6] Each of Cerberus' heads is said to have an appetite only for live meat and thus allow only the spirits of the dead to freely enter the underworld, but allow none to leave.[7] Cerberus was always employed as Hades' loyal watchdog, and guarded the gates that granted access and exit to the underworld.[8]

The Twelfth Labour of Heracles[edit] 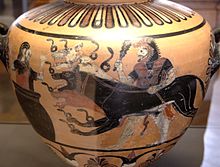 Capturing Cerberus was the final labour assigned to Heracles (Hercules) by King Eurystheus,[9] in recompense for the killing of his own children by Megara after he was driven insane by Hera, and therefore was the most dangerous and difficult.

After having been given the task, Heracles went to Eleusis to be initiated in the Eleusinian Mysteries so he could learn how to enter and exit the underworld alive, and in passing absolve himself for killing centaurs. He found the entrance to the underworld at Tanaerum, and Athena and Hermes helped him to traverse the entrance in each direction. He passed Charon with Hestia's assistance and his own heavy and fierce frowning.

Whilst in the underworld, Heracles met Theseus and Pirithous. The two companions had been imprisoned by Hades for attempting to kidnap Persephone. One tradition tells of snakes coiling around their legs then turning into stone; another tells that Hades feigned hospitality and prepared a feast inviting them to sit. They unknowingly sat in chairs of forgetfulness and were permanently ensnared. When Heracles had pulled Theseus first from his chair, some of his thigh stuck to it (this explains the supposedly lean thighs of Athenians), but the earth shook at the attempt to liberate Pirithous, whose desire to have the wife of a god for himself was so insulting, he was doomed to stay behind.

Heracles found Hades and asked permission to bring Cerberus to the surface, to which Hades agreed if Heracles could overpower the beast without using weapons. Heracles was able to overpower Cerberus and proceeded to sling the beast over his back, dragging it out of the underworld through a cavern entrance in the Peloponnese and bringing it to Eurystheus.

Cerberus, as illustrated by Gustave Doré in Dante's Divine Comedy.

Cerberus is featured in many prominent works of Greek and Roman literature, most famously in Virgil's Aeneid, Peisandros of Rhodes' epic poem the Labours of Hercules, the story of Orpheus in Plato's Symposium, and in Homer's Iliad, which is the only known reference to one of Heracles' labours which first appeared in a literary source.[10]

The depiction of Cerberus is relatively consistent between different works and authors, the common theme of the mane of serpents is kept across works, as is the serpent's tail, most literary works of the era describe Cerberus as having three heads with the only notable exception being Hesiod's Theogony in which he had 50 heads.[11]

Most occurrences in ancient literature revolve around the basis of the threat of Cerberus being overcome to allow a living being access to the underworld; in the Aeneid Cerberus was lulled to sleep after being tricked into eating drugged honeycakes and Orpheus put the creature to sleep with his music. Capturing Cerberus alive was the twelfth and final labour of Heracles. In Dante Alighieri's Inferno, Canto VI, the "great worm" Cerberus is found in the Third Circle of Hell, where he oversees and rends to pieces those who have succumbed to gluttony, one of the seven deadly sins.[12]

In the constellation Cerberus introduced by Johannes Hevelius in 1687, Cerberus is sometimes substituted for the "branch from the tree of the golden apples" fetched by Atlas from the garden of the Hesperides.[13]

In this vase painting, Heracles leads a two-headed Cerberus out of Hades.

Numerous references to Cerberus have appeared in ancient Greek and Roman art,[14] found in archaeological ruins and often including in statues and architecture, inspired by the mythology of the creature. Cerberus' depiction in ancient art is not as definitive as in literature; the poets and linguists of ancient Greece and Rome mostly agreed on the physical appearance (with the notable exception in Hesiod's Theogony in which he had 50 heads).[11] His depiction in classical art mostly shows the recurring motif of serpents, but the number of heads differs.[15] A statue in the Galleria Borghese depicts Cerberus with three heads sitting by the side of Hades, while a bronze sculpture depicting Heracles' twelfth labour shows the demi-god leading a two-headed Cerberus from the underworld. The majority of vases depicting the twelfth task also show Cerberus as having two heads.[16] Classical critics have identified one of the earliest works of Cerberus as "the most imaginative," that being a Laconian vase created around 560 BC in which Cerberus is shown with three-heads and with rows of serpents covering his body and heads.[17]

The name "Cerberus" is a Latinised version of the Greek Kerberos. The etymology of this name prior to Greek is disputed. It has been claimed to be related to the Sanskrit word सर्वरा sarvarā, used as an epithet of one of the dogs of Yama, from a Proto-Indo-European word *k̑érberos, meaning "spotted"[18] (This etymology suffers from the fact that it includes a reconstructed *b, which is extremely rare in Proto-Indo-European. Yet according to Julius Pokorny it is well distributed, with additional apparent cognates in Slavic, British and Lithuanian.[19]) The use of a dog is uncertain,[20][21] although mythologists have speculated that the association was first made in the city of Trikarenos in Phliasia.[22] Bruce Lincoln (1991),[23] among others, critiques this etymology; and Ogden (2013)[24] refers to it as "dismissed".

Lincoln notes a similarity between Cerberus and the Norse mythological dog Garmr, relating both names to a Proto-Indo-European root *ger- "to growl" (perhaps with the suffixes -*m/*b and -*r). However, as Ogden observes, this analysis actually requires Cerberus and Garmr to be derived from two different Indo-European roots (*ger- and *gher- respectively), and so does not actually establish a relationship between the two names.

There have been many attempts to explain the depiction of Cerberus. A 2nd century CE Greek known as Heraclitus the paradoxographer - not to be confused with the 5th century BCE Greek philosopher Heraclitus - claimed euhemeristically that Cerberus had two pups that were never away from their father, and that Cerberus was in fact a normal (though very large) dog, but that artists incorporating the two pups into their work made it appear as if his two children were in fact extra heads.[25] Classical historians have dismissed Heraclitus the paradoxographer's explanation as "feeble".[22] Mythologers have speculated that if Cerberus were given his name in Trikarenos it could be interpreted as "three karenos".[22] Certain experts believe that the monster was inspired by the golden jackal.[26]