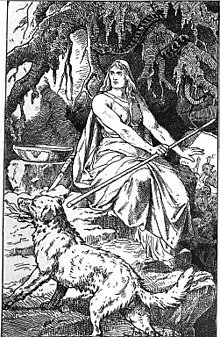 In Norse mythology, Garmr or Garm (Old Norse "rag"[1]) is a dog associated with both Hel and Ragnarök, and described as a blood-stained watchdog that guards Hel's gate.

The best of trees | must Yggdrasil be,
Skíðblaðnir best of boats;
Of all the gods | is Óðinn the greatest,
And Sleipnir the best of steeds;
Bifröst of bridges, | Bragi of skalds,
Hábrók of hawks, | and Garm of hounds.[2]

One of the refrains of Völuspá uses Garmr's howling to herald the coming of Ragnarök:

Now Garm howls loud | before Gnipahellir,
The fetters will burst, | and the wolf run free;
Much do I know, | and more can see
Of the fate of the gods, | the mighty in fight.[3]

After the first occurrence of this refrain the Fimbulvetr is related; the second occurrence is succeeded by the invasion of Jötnar (giants) in the world of gods; after the last occurrence, the rise of a new and better world is described.

Baldrs draumar describes a journey which Odin makes to Hel. Along the way he meets a dog.

Then Óðinn rose, | the enchanter old,
And the saddle he laid | on Sleipnir's back;
Thence rode he down | to Niflhel deep,
And the hound he met | that came from hell.

Bloody he was | on his breast before,
At the father of magic | he howled from afar;
Forward rode Óðinn, | the earth resounded
Till the house so high | of Hel he reached.[4]

The Prose Edda book Gylfaginning assigns him a role in Ragnarök:

Then shall the dog Garmr be loosed, which is bound before Gnipahellir: he is the greatest monster; he shall do battle with Týr, and each become the other's slayer.[6]

Bruce Lincoln brings together Garmr and the Greek mythological dog Cerberus, relating both names to a Proto-Indo-European root *ger- "to growl" (perhaps with the suffixes -*m/*b and -*r).[7] However, as Ogden (2013)[8] notes, this analysis actually requires Cerberus and Garmr to be derived from two different Indo-European roots (*ger- and *gher- respectively), and in this opinion does not establish a relationship between the two names. However, the two roots are similar enough that a connection can still be argued.