Jump to content
Not to be confused with Society for the Prevention of Cruelty to Animals. 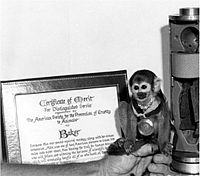 Squirrel monkey "Miss Baker" poses with the Certificate of Merit for Distinguished Service she was awarded by the ASPCA after her successful return to earth, the associated medal, and the couch used for her flight (to the right). Baker and her traveling companion Able were the first animals to return alive from space.

Following the creation of the Royal Society for the Prevention of Cruelty to Animals (RSPCA) in the UK in 1824 (given Royal status in 1840), Henry Bergh founded the American Society for the Prevention of Cruelty to Animals on April 10, 1866 in New York City[2] on the belief that animals are entitled to kind and respectful treatment at the hands of humans, and must be protected under the law. It is the oldest animal welfare organization in the United States. Founded in 1866, the ASPCA was the first humane organization in the Western Hemisphere. Buffalo's chapter, founded in 1867, is the second oldest.[3] ASPCA was founded to stop the injustices animals face across the United States. On February 8, 1866, Bergh pleaded on behalf of animals at a meeting at Clinton Hall in New York City. Some of the issues he discussed were cockfighting and the horrors of slaughterhouses. After getting signatures for his "Declaration of the Rights of Animals," Bergh was given an official charter to incorporate ASPCA on April 10, 1866. On April 19, 1866, the first anti-cruelty law was passed since the founding of ASPCA, and the organization was granted the right to enforce anti-cruelty laws. At that time, there were three staff members at the ASPCA. In 1867, ASPCA operated its first ambulance for injured horses and advocated alternatives for inhumane actions toward animals such as horses, live pigeons, cats and dogs. By the time of Bergh's death in 1888, 37 out of the 38 states in the union had enacted anti-cruelty laws that were enforced by the ASPCA. Early goals of ASPCA focused on efforts for horses and livestock, since at the time they were used for a number of activities.

Starting at the turn of the 20th century, small domestic animals, like cats and dogs, became the focus for members of ASPCA. ASPCA wrote its first annual report in 1867 after a man was sentenced to 10 days in prison for beating a cat to death.[4][5]

From 1894 to 1994, the ASPCA operated the municipal animal shelter system in New York City which inevitably euthanized unadopted animals. Starting in 1977, the ASPCA entered into a contract with New York City Department of Health to receive municipal funding to operate the shelter system. This created the effect of being increasingly reliant on government contracting/government income rather than private donations. This resulted in being subject to the effects of yearly city budget appropriations. In 1993, the ASPCA decided that operating the kill shelter system for New York City conflicted with its mission and discouraged private donations. The group then terminated its contract for operating the shelter system.[6][7] The agreement for operation of the Humane Law Enforcement Division remained unchanged by this action. Operation of the shelter system was transferred to Center for Animal Care and Control in 1995.

Medicine for animals under ASPCA[edit]

One of the early goals of ASPCA was to improve the health and welfare of animals. The first animal hospitals under ASPCA were created in 1912. Since the creation of these hospitals, ASPCA found a new tactic in improving its cause: the ability to develop various medical procedures and innovations with help from new discoveries in medicine and technology. Some of these procedures and innovations include the following:

Resources for pets and parents[edit] 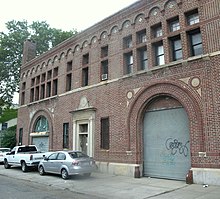 The ASPCA is the nation’s main humane organization, "providing local and national leadership in three key areas: caring for pet parents and pets, providing positive outcomes for at-risk animals and serving victims of animal cruelty".[8] Aside from rescuing animals, the ASPCA is also involved with disaster preparedness and management. For instance, prior to Hurricane Gustav making landfall in Louisiana on September 1, 2008, the ASPCA checked in more than 800 animals into a shelter located in Shreveport. The ASPCA, along with the American Humane Association, maintained a 24-hour presence at the shelter.

The ASPCA works primarily with companion animal issues, such as pet care, equine or horse cruelty issues, and animal cruelty and neglect. Its programs and services include: a national poison control hotline for pet owners and animal health professionals; a shelter outreach program to promote best practices within locally owned shelters, a corporate partner program to promote animal-friendly products and services, and a special anti-cruelty initiative to teach animal welfare education and animal welfare law enforcement practices (known as "humane law enforcement" within the organization) across the United States. In the state of New York, the ASPCA's Humane Law Enforcement division has powers to investigate cruelty and enforce laws. The Humane Law Enforcement division has been featured on the Animal Planet television program, Animal Precinct.

The ASPCA has also partnered with Hartville Group, Inc to provide pet health insurance under the ASPCA name as ASPCA Pet Insurance.[9]

Cases involving torture, killings and mistreatment of animals are some examples of cases handled by the ASPCA. A common example was displayed in the news in October 2008, when the ASPCA was in charge of an investigation involving the slaughtering of a beagle that lived in the Bronx. Brian McCafferty was charged with torturing and injuring his wife's beagle, Jerry, after an argument with his wife. The ASPCA conducted an necropsy that concluded that Jerry was stabbed twice and shot in the neck with a rifle. McCafferty claims that he was acting in self-defense when the dog attacked him. He was eventually released on bail.[10]

As of March 17, 2012, another case involving the harm of an animal is the slicing of a two-year-old male cat, Velvet by his owner Daniel Lawson. Lawson was found to have inflicted the wound with a metal bar and was arrested by ASPCA specialists. If convicted, he will face up to one year in jail and a $1,000 fine.[11]

The ASPCA has an Adopt-a-Shelter-Dog program each October where it holds events and programs, and recruits and asks potential pet owners to adopt one of the more than one million animals living in shelters across the country.

At ASPCA Day on April 10 each year, the organizes encourages supporters to wear orange—the official color of the ASPCA—to commemorate the protection of animals. ASPCA members spread their message that day using mobile adoption vans, photo booths for pets, information booths on animal cruelty laws and ways to better care for pets.[12] In 2014 the ASPCA spoke out in support of new New York City mayor Bill de Blasio's campaign to ban horse-drawn carriages in the city.[13]

In 2012 the ASPCA agreed to pay Ringling Bros. and Barnum & Bailey Circus $9.3 million of donations to settle a lawsuit regarding the ASPCA's false allegations of animal cruelty by the circus. Courts found that ASPCA activists had paid the key witness, a former Ringling barn helper, at least $190,000, making him "essentially a paid plaintiff" who lacked credibility.[14] Another controversy was over the salary of the Chief Executive Officer. When Ed Sayres served as CEO it was revealed that he was paid more than $500,000 per year.[15] Sayres stepped down in 2012 amidst these and other controversies and in 2013 longtime ASPCA staff member Matthew Bershadker was named president and CEO.[16]

In 2008, the Illinois Senate passed the bill HB 5076. This bill contains various "Good Samaritan" provisions that protect rescuers from being sued if they rescue and provide for an injured animal in disasters or other emergencies. This bill also brings clarification to the Humane Care for Animals Act.[17]

Much of the content of this article is based on information from the official ASPCA website: "ASPCA: The American Society for the Prevention of Cruelty to Animals".