Photograph of a dog at a no-kill animal shelter in Washington, Iowa 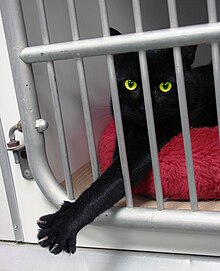 A cat in an animal shelter waiting for adoption

An animal shelter or pound is a place where stray, lost, abandoned or surrendered animals, mostly dogs and cats, and sometimes sick or wounded wildlife are brought. While no-kill shelters exist, it is sometimes policy to euthanize sick animals, and any animal that is not claimed quickly enough by a previous or new owner. In Europe, of 30 countries included in a survey, all but three (Germany, Greece, and Italy) permitted the killing of healthy stray dogs.[1] Critics believe the new term "animal shelter" is generally a euphemism for the older term "pound". The word "pound" had its origins in the animal pounds of agricultural communities, where stray livestock would be penned or impounded until claimed by their owners.

In the United States there is no government-run organization that provides oversight or regulation of the various shelters on a national basis. However, many individual states do regulate shelters within their jurisdiction. One of the earliest comprehensive measures was the Georgia Animal Protection Act of 1986. The law was enacted in response to the inhumane treatment of companion animals by a pet store chain in Atlanta.[2] The Act provided for the licensing and regulation of pet shops, stables, kennels, and animal shelters, and established, for the first time, minimum standards of care. The Georgia Department of Agriculture was tasked with licensing animal shelters and enforcing the new law through the Department's newly created Animal Protection Division.

An additional provision, added in 1990, was the Humane Euthanasia Act, which was the first state law to mandate intravenous injection of sodium pentothal in place of gas chambers and other less humane methods.[3][4] The law was further expanded and strengthened with the Animal Protection Act of 2000.[5]

Currently it is estimated that there are approximately 5,000 independently run animal shelters operating nationwide.[6] Shelters have redefined their role since the 1990s. No longer serving as an until-death repository for strays and drop-offs, modern shelters have taken the lead in controlling the pet population, promoting pet adoption, and studying shelter animals' health and behavior. Shelters, and shelter-like volunteer organizations, responded to cat overpopulation with trap-neuter-release programs that reduced feral cat populations and reduced the burden on shelters.

In the United States, many government-run animal shelters operate in conditions that are far from ideal. In the wake of the financial crisis of 2007-2008 many government shelters have run out of adequate space and financial resources.[7] Shelters unable to raise additional funds to provide for the increased number of incoming animals have no choice but to euthanize them, sometimes within days.[8] In 2012, approximately four million cats and dogs died in U.S. shelters.[9]

Some shelters will also keep reptiles and parrots.

In the United Kingdom, animal shelters are more commonly known as rescue or rehoming centers, and are run by charitable organizations. The most common rescue and rehoming organizations are the RSPCA, Cats Protection, and the Dogs Trust.

Larger cities in Germany either have a city shelter for animals or contract with one of the very common non-profit animal organizations throughout the country, which run their own shelters. Most shelters are populated by dogs, cats, and a variety of small animals like mice, rats, and rabbits. Additionally there are so-called Gnadenhöfe ("mercy-farms") for larger animals. They take cattle or horses from private owners who want to put them down for financial reasons. Under German law euthanasia of animals is restricted to medical reasons or cases where the animal is dangerous, not controllable, and actually poses a danger to humans (Gefahr im Verzug - exigent circumstance). Most dangerous animals, such as aggressive dogs (possession of some special breeds is restricted), are locked away until rehoused to a controlled environment.

Across India, various animal shelters are run by the followers of Jainism. The Lal Mandir, a prominent Jain temple in Delhi, is known for the Jain Birds Hospital in a second building behind the main temple.[10][11] Every city and town in Bundelkhand has animal shelters run by Jains.

In New Zealand, dog pounds are run by each Territorial Local Authority, who provide Animal Control services under the Dog Control Act 1996.[12]