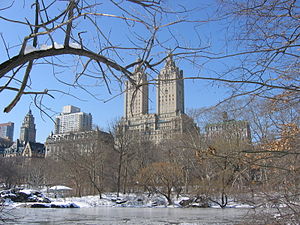 Central Park is pretty at any time of the year.

New York City is one of the global centers of international finance, politics, communications, film, music, fashion, and culture, and is among the world's most important and influential cities. It is home to many world-class museums, art galleries, and theaters. Many of the world's largest corporations have their headquarters here. The headquarters of the United Nations is in New York and most countries have a consulate here. This city's influence on the globe and all its inhabitants is hard to overstate, as decisions made within its boundaries often have impacts and ramifications across the world.

Immigrants (and their descendants) from over 180 countries live here, making it one of the most cosmopolitan cities in the world. Travelers are attracted to New York City for its culture, energy and cosmopolitanism.

English is the primary language spoken by most New Yorkers, although in the many communities it is common to hear other languages from around the world. There are many Spanish-speaking neighborhoods with large Latino and Hispanic populations. It is possible, albeit somewhat difficult, for a non-English-speaking tourist to get by in New York speaking only Spanish. Many establishments in the main commercial and touristic areas have Spanish-speaking staff on duty, and many municipal government services in New York City are also available in Chinese and Spanish.

The borough of Manhattan is a long, narrow island nestled in a natural harbor. It is separated from The Bronx on the north east by the Harlem River (actually a tidal strait); from Queens and Brooklyn to the east and south by the East River (also a tidal strait); and from the State of New Jersey to the west and north by the Hudson River. Staten Island lies to the south west, across Upper New York Bay.

The term “the city” may refer either to New York City as a whole, or to the borough of Manhattan alone, depending on the context. The other boroughs - Brooklyn, The Bronx, Staten Island, and Queens - are sometimes referred to as the "outer boroughs.”