For project information on how Wikivoyage relates to Wikipedia, see Wikipedia:Wikivoyage.

Wikivoyage is a free web-based travel guide for travel destinations and travel topics written by volunteer authors. It is a sister project of Wikipedia and supported and hosted by the same non-profit Wikimedia Foundation. Wikivoyage has been called the "Wikipedia of travel guides".[2]

The project was started when editors at the German and then Italian versions of Wikitravel decided in September 2006 to move their editing activities and then current content to a new site, in accordance with the site license, a procedure known as "forking". The resulting site went live as "Wikivoyage" on December 10, 2006 and was owned and operated by a German association set up for that purpose, Wikivoyage e.V. (which continues to be its representative association). Content was published under the copyleft license Creative Commons Attribution-ShareAlike.

In 2012, following a lengthy history of dissatisfaction with their existing host,[3] the English-language version community of Wikitravel also decided as a community to fork their project. In a two-way move, the English Wikitravel community re-merged with Wikivoyage under the Wikivoyage brand, and also all Wikivoyage language versions moved their operations to be hosted by the Wikimedia Foundation (WMF), a non-profit organization hosting several of the world's largest wiki-based communities such as Wikipedia.[4][5] Following agreements by the various communities involved and the Wikimedia Foundation, the site was moved to the WMF servers in December 2012 and the whole of Wikivoyage was officially re-launched as a Wikimedia project on January 15, 2013, the day of the 12th anniversary of Wikipedia's launch.[6]

Using a wiki model, Wikivoyage is built through collaboration of Wikivoyagers from around the globe. Articles can cover different levels of geographic specificity, from continents to districts of a city. These are logically connected in a hierarchy, by specifying that the location covered in one article "is within" the larger location described by another. The project also includes articles on travel-related topics, phrasebooks for travelers, and suggested itineraries.

Wikivoyage is a multilingual project available in nine languages, with each language-specific project developed independently. The English version leads in terms of number of articles, with more than 27,000 in Spring 2013.[citation needed] While now a Wikimedia project, it was begun independently. Wikivoyage content is broadly categorized as: destinations, itineraries, phrasebooks, and travel topics.

Geographical units within the geographical hierarchy may be described in articles, based on the criterion, "can you sleep there?"

Attractions such as hotels, restaurants, bars, stores, nightclubs, tour operators, museums, statues or other works of art, city parks, town squares or streets, festivals or events, transport systems or stations, bodies of water, and uninhabited islands are listed in the article for the place within which they are located.

An itinerary describes a group of destinations according to a temporal division rather than a spatial one and will list destinations and attractions to visit during a given amount of time, with recommended durations of stay and routes to follow. Itineraries may cross geographical regions, but usually have a well-defined path.

Travel topics are articles that deal with a specific topic of interest to travelers that is too large or detailed to go in a specific travel guide destination page; travel tips that are so general that they apply to nearly all destinations and do not need to be in each specific travel guide; major events that occur in different places; and specialist travel information, such as regional guides to scuba-diving sites.

Wikivoyage uses the free MediaWiki software (developed for Wikipedia) to allow internet-based editing without requiring registration. Quality assurance occurs in the same way as on Wikipedia: through reciprocal control by editors. The use of the same software is intended to facilitate familiarization with Wikivoyage.

Wikivoyage uses the Creative Commons Attribution-ShareAlike license, but not the GNU free documentation license. This is intended to facilitate the production of printed guides from a legal point of view. Media files are intended to be published either in the public domain or under multiple licenses (GNU, Creative Commons).

The information is built up in a more structured way than usual for encyclopaedias. Articles belonging to a topic are grouped by the categories known from the Mediawiki software as well as through the so-called bread crumb trails which show the geographical connection between the articles.

The content design is decided by consensus of the community of authors.

At the time of transfer to WMF, the content of Wikivoyage was available in German, Italian, English, French, Dutch, Russian, and Swedish languages. The Russian language project is named Викигид (which translates roughly as "wiki guide").

A distribution through mirrors or by other means of modern media is licit and also desired. For this purpose, up-to-date archives are provided on a weekly basis. The files contained in these archives are provided with all the necessary legal licensing information, e.g. the attribution of the authors. A technical extension related to the program concerning the mentioning of image authors is in preparation.

The choice of the Creative Commons Attribution-ShareAlike license is intended to allow simplified distribution by mention of the authors, without the need to state the complete license text. 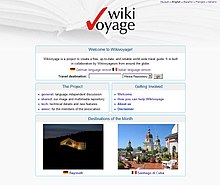 Screenshot of Wikivoyage's portal before the WMF migration
See also: Wikitravel § Community fork in 2012, and Internet Brands § Wikitravel and Wikimedia

The name is a portmanteau of the words "Wiki" (an Internet-based software system that allows change and extension of the text by any user) and "voyage", meaning travel, journey, or trip. It was retained after extensive voting amongst established editors to decide on the post re-launch name.

Many Wikivoyage authors and administrators started by working on Wikitravel, which launched its German version on October 7, 2004. On April 20, 2006, Wikitravel was acquired by the for-profit Internet Brands, an operator of media and e-commerce sites. Discontent increased in response to the management style of the new owners, and this led to the decision by most German administrators and authors to continue the project as a fork.

After about six months of preparation, the non-profit association Wikivoyage e.V. was founded and registered, as both the owner of the domain names and operator of the servers.[7] On December 10, 2006, the project went live online with the initial data from the German-language Wikitravel. After seven months, 40% of the articles were new, rising to 50% after 10 months.[8] At this stage there were still major gaps in the coverage, but there were several articles for travel destinations like Egypt, Thailand and Switzerland and for the travel topic "cycling".[9]

The Italian branch of Wikivoyage was launched on December 10, 2007. The organization of media data and the administration of user access were already applicable for use in branches in other languages.

The project garnered some press reports, particularly by Swiss radio and newspapers. The Tages-Anzeiger[10] from Zurich and the Swiss radio station DRS1 reported broadly on the project and discussed its weaknesses.[11] The project was mainly supported by German and Swiss authors.

In 2012, after a lengthy history of dissatisfaction with Wikitravel's host and owner, Internet Brands, it was proposed that the community at Wikitravel fork their work from Wikitravel and Wikitravel Shared and – together with the existing sites at Wikivoyage – merge to create a new travel wiki hosted by the Wikimedia Foundation, the steward of Wikipedia and a large range of other non-profit reference sites based upon a wiki community culture.[12][13][14] After lengthy discussion by users of all three communities, comments by their respective hosts, and confirmation by the Wikimedia Foundation that it would host a travel project if users wished, nearly all administrators and bureaucrats at Wikitravel decided to fork their existing work to Wikivoyage.[15]

The contents of Wikitravel in all languages and its related Commons-equivalent site (for images, video, and other media files) were downloaded on August 2, 2012 as a "database dump" in preparation for such a migration. This content became the starting point for all languages excluding German and Italian, which were already hosted by Wikivoyage. Forking is a normal or anticipated activity in wiki communities and is expressly permitted by the Creative Commons–Attribution–Share Alike (CC BY-SA) license in use on sites such as Wikitravel. MediaWiki, the wiki software used for Wikitravel, included that facility, although Internet Brands disabled the function shortly after this date in an attempt to prevent the data migration.[citation needed] The community discussion at Wikimedia ended on August 23, 2012 with 540 votes for and 152 votes against the creation of a Wikimedia Foundation travel guide.[16] The project began in beta on WMF servers on November 10, 2012[17] and was launched fully on January 15, 2013.

As part of the migration, it is planned that current owners and user body "Wikivoyage e.V." will remain in place as an associated organization affiliated with the Wikimedia Foundation "at an organizational level". Wikivoyage stated that, freed of the need to maintain its servers, it would be able to benefit by increasing its work related to outreach, community support, discussion and information, and technical enhancements to the site's software.[18][19]

In September 2012, Internet Brands filed a lawsuit against one Wikitravel administrator, Ryan Holliday, and one Wikipedia administrator, James Heilman, accusing them of trademark breach and commercial misconduct in the proposals affecting that site, with the defendants and Wikimedia rejecting the case as an example of a SLAPP lawsuit—one that is undertaken without plausible legal grounds for the primary purpose of deterring, overwhelming, or frustrating people engaged in fully lawful actions.[20] On November 19, 2012, the claims by Internet Brands were dismissed by the United States District Court for the Central District of California.[21][22][23]