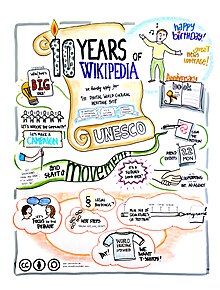 Wikipedia for World Heritage refers to the efforts put forth to get Wikipedia listed as a UNESCO World Heritage Site. The idea was originally proposed to the Wikipedia chapter by Wikimedia at the 2011 Wikimedia Conference in Berlin.[1][2] An online petition was started at the German Wikipedia on May 23, 2011.[3] The bid is considered to be the first for a digital entity and is expected to be controversial with the list's maintainers who are notably conservative.[2]

Jimbo Wales has stated that "the basic idea is to recognize that Wikipedia is this amazing global cultural phenomena that has transformed the lives of hundreds of thousands of people."[2]

If Wikipedia fails to get listed as a World Heritage Site, it has been suggested that they apply for UNESCO Intangible Cultural Heritage Lists.[3]