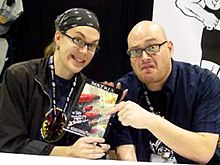 San Diego ComicCon 2004, with Lana on the left and Lilly (before transition) on the right.

Lana Wachowski (formerly called "Larry") was born in Chicago in 1965. Lilly Wachowski (formerly called "Andy") followed in 1967. Their mother, Lynne (née Luckinbill), was a nurse and painter whose brother is actor Laurence Luckinbill. Their father, Ron Wachowski, was a businessman of Polish descent.[1][2] They went to Kellogg Elementary School, in Chicago's Beverly area, and graduated from Whitney Young High School, known for its performing arts and science curriculum, in 1983 and '86. Former students recall them playing Dungeons & Dragons and working in the school's theater and TV program. Lilly then attended Emerson College in Boston, while Larry went to Bard College in New York. Both dropped out before graduating, and they ran a carpentry business in Chicago while creating comic books.[3]

The siblings admit to a love for telling multipart stories. "Because we grew up on comic books and the Tolkien trilogy, one of the things we're interested in is bringing serial fiction to cinema," Lana has said. Lilly puts her desire to shake up viewers a bit more bluntly, "We think movies are fairly boring and predictable. We want to screw with audiences' expectations."[4]

In 2003, they created Burlyman Entertainment and have released comic books based on The Matrix as well as two original bi-monthly series:

Rumors that Larry Wachowski was a cross-dresser or transitioning gender spread in the early 2000s, though neither sibling has spoken directly on the subject.[5] The Hollywood Reporter and the New York Times have referred to the Wachowskis as "Andy and Lana (formerly Larry) Wachowski",[6][7] and Deadline.com has referred to the duo as "Andy and Lana Wachowski."[8] On some documents she appears as Laurenca Wachowski.[9][10][5]

Lilly Wachowski has been married to Alisa Blasingame since 1991.[11]

The Wachowskis are collaborating with Tom Tykwer on Cloud Atlas, an adaptation of David Mitchell's novel of the same name, for Warner Bros. Pictures. Tykwer and The Wachowskis collaborated on the screenplay and are co-directing the film, leading their own crews that are working in parallel.[12] The film is set for release in late 2012.

Warner Bros. have expressed interest in Hood, a modern adaptation of the Robin Hood legend, which the Wachowskis wrote and plan to direct. They also wrote an Iraq war-set gay romance conspiracy thriller titled CN-9, however the project failed to find financing.[6] Jupiter Ascending, an original science fiction screenplay by the Wachowskis, is set to be made into a film by Warner Bros. The studio is looking for a major star to lead the cast, ahead of a planned spring 2012 start date.[13]