Saints Philip Evans and John Lloyd were Welsh Roman Catholic priests, who died for their faith. They are both among the Forty Martyrs of England and Wales. 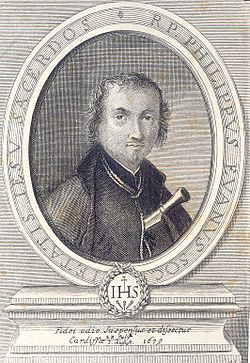 This revered martyr was born in Monmouth, 1645, was educated at St Omer[1] he joined the Society of Jesus, 7 September 1665 in Watten, and was ordained at Liège and sent to South Wales as a missionary in 1675.[1]

He was a zealous priest and despite the official anti-Catholic policy no action was taken against him. Then the Oates' scare swept the country and both Father Lloyd and Father Evans were caught up in the aftermath.

In November 1678 a John Arnold, of Llanvihangel Court near Abergavenny, a justice of the peace and hunter of priests, offered a reward of £200 (an enormous sum then) for his arrest. Despite the manifest dangers Father Evans steadfastly refused to leave his flock.[1]

He was arrested at the home of a Mr. Christopher Turberville at Sker, Glamorgan on 4 December 1678.[1]

Father John Lloyd, a Welshman and a secular priest (i.e., a priest not associated with any religious order), was a Breconshire man. He was educated first in Ghent, then at the English College, Valladolid, Spain, entering in 1649.[1] He took the 'missionary oath' on 16 October 1649 to return to England. Sent to Wales in 1654 to minister to covert Catholics, he lived his vocation while constantly on the run for 24 years. He was arrested at Mr Turberville's house at Penlline, Glamorganshire, 20 November, 1678, and thrown into Cardiff jail. There he was joined by the Jesuit, Philip Evans.[2]

Both priests were brought to trial in Cardiff on Monday, 5 May 1679. Neither was charged with being associated with the "plot" concocted by Oates. Nonetheless, they were tried for being priests and coming into the principality of Wales contrary to the provisions of the law, and were declared guilty of 'treason' for exercising their ministerial priesthood.[1]

The executions took place in Pwllhalog, Cardiff on 22 July 1679

Saint Philip Evans was the first to die. He addressed the gathering in both Welsh and English saying, ‘Adieu, Father Lloyd! Though only for a little time, for we shall soon meet again'. Saint John Lloyd spoke very briefly saying, ‘I never was a good speaker in my life'.[1]

In 1970, both John Lloyd and Philip Evans, S.J. were canonised by Pope Paul VI. Although they died on 22 July, this date is kept by the Catholic Church as the day of St Mary Magdalen, so their joint feast day was assigned to July 23. The same date is the assigned day of St Bridget of Sweden, who was later designated one of six patron saints of Europe by Pope John Paul II. Throughout Europe, including Wales, St Bridget must now be kept with the rank of a feast. This means that while churches dedicated to St John Lloyd or St Philip Evans can keep their feast on 23 July, other churches must commemorate St Bridget on that date. A voluntary celebration for St John Lloyd and St Philip Evans may be kept on a nearby date at the discretion of local communities.[3]

Forty Martyrs of England and Wales[edit]

The Forty Martyrs of England and Wales' collective feast day was formerly kept on 25 October, but in England are now celebrated together with beatified martyrs on 4 May.[4] In Wales, 25 October is the feast of the 'Six Welsh Martyrs and their companions'.[3]