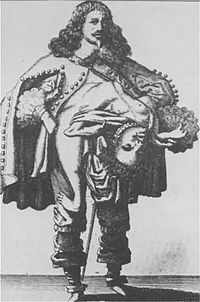 Lazarus and his brother Joannes Baptista in a contemporary etching.

Lazarus Colloredo and Joannes Baptista Colloredo (1617 – after 1646) were Italian conjoined twins who toured in 17th century Europe. They were born in Genoa, Italy..

The upper body of Joannes Baptista (named after John the Baptist) and his left leg stuck out of his mobile brother. He did not speak and kept his eyes closed and mouth open all the time. According to a later account by Copenhagen anatomist Thomas Bartholinus, if someone pushed the breast of Joannes Baptista, he moved his hands, ears and lips.

To make a living, Lazarus toured around Europe and visited at least Basel, Switzerland and Copenhagen, Denmark before he arrived in Scotland in 1642 and later visited the court of Charles I of England.

They also visited Gdansk, Turkey and Denmark, and toured Germany and Italy in 1646.[1]

Contemporary accounts described Lazarus as courteous and handsome but for his brother who just dangled before him. When Lazarus was not exhibiting himself, he covered his brother with his cloak to avoid unnecessary attention.

Later accounts claim that Lazarus married and sired several unmutated children. His engraved portrait depicts him in a costume of a courtier of the period of House of Stuart.

The brothers' exact date of death is unknown.

Later go9o accounts claim that Lazarus married and sired several unmutated children. His engraved portrait depicts him in a costume of a courtier of the period of House of Stuart.