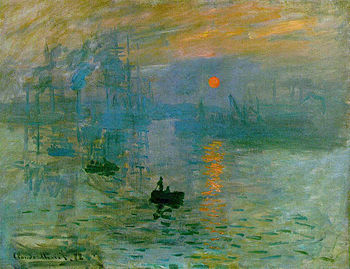 Impressionism is a style of painting which began in France in the late 19th century. Impressionist painting shows life-like subjects painted in a broad, rapid style, with brushstrokes that are easily seen and colours that are often bright. The term 'impressionism' comes from a painting by Claude Monet, which he showed in an exhibition with the name Impression, soleil levant ("Impression, Sunrise"). An art critic called Louis Leroy saw the exhibition and wrote a review in which he said that all the paintings were just "impressions".

In the 19th century, most artists learned to paint by attending an art school or academy. The academies were very strict about the way that young artists learnt to paint. The popular style of painting was called classicism. Classical paintings were always done inside a studio. They often showed stories from mythology. An artist would prepare for a painting by doing lots of drawings. The paintings were very smoothly and carefully painted.

At the same time there were several painters who loved to paint the French landscape and the village people in a realist way, different from Classicism. They would often make small quick paintings out of doors, and then finish them in the studio. These artists include Gustave Courbet and Jean-Baptiste Corot. Edgar Degas wrote in 1883: "There is one master, Corot. We are nothing in comparison, nothing".[1] A group of young painters who admired the work of these artists became friends and started painting together. These artists were Claude Monet, Pierre-Auguste Renoir, Alfred Sisley, Frédéric Bazille, Camille Pissarro, Paul Cézanne, and Armand Guillaumin.

Every year the academy in Paris would hold a big exhibition (art show) called the Salon de Paris. In 1863 an artist called Edouard Manet put a picture into the show called Lunch on the Grass ("Le déjeuner sur l'herbe"). The judges at the Salon refused to hang this work in the gallery because it showed a naked woman sitting on the grass with two men wearing clothes. If the painting had been about Ancient Greek mythology, this would not be a problem but these men were wearing ordinary suits, and the woman's dress and hat were lying on the grass. Perhaps she was a prostitute! The judges said that the painting was indecent (very rude).[2] Monet and his friends also had their paintings turned away. They were angry and they met with Manet to discuss this. The Emperor Napoleon III gave permission for another exhibition called the Salon des Refusés which showed all the pictures that had been "refused". Many people went to see this exhibition and soon discovered that there was a new "movement" in art, quite different from the style that they were used to. 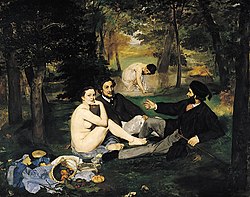 In 1872 Monet and his friends formed a society called the "Cooperative and Anonymous Association of Painters, Sculptors, and Engravers". They began to organize their own art show. In 1874 thirty artists held their first exhibition. The critic Louis Leroy made fun of their work and wrote an article called The Exhibition of the Impressionists. The public who came to the exhibition also began to use this name. The painters themselves soon started to use the name "Impressionists" and they have been called by that name ever since. They had eight exhibitions between 1874 and 1886. They paid a dealer called Paul Durand-Ruel to organise exhibitions, and he arranged shows in London and New York. Bit by bit, their paintings became popular. Some of the Impressionists, Monet and Renoir, lived to be old and famous, but others died very poor. The main artists who are called "Impressionists" include Claude Monet, Auguste Renoir, Paul Cézanne, Camille Pissarro, Alfred Sisley, Edgar Degas, Berthe Morisot, Armand Guillaumin, Mary Cassatt, Gustave Caillebotte and Frederic Bazille.

Many artists worked with the Impressionists for a short time, but then began to try out new ideas. These artists all painted in different ways, but together are called the Post-Impressionists. They include Georges Seurat, Paul Cézanne, Paul Gauguin, Henri de Toulouse-Lautrec, and Vincent van Gogh. 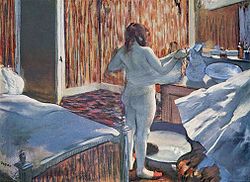 Degas, A woman washing herself in her bedroom. Impressionists painted everyday subjects, often as if they were looking through a camera.

Before the time of the Impressionists, many artists worked by painting portraits. Before the invention of the camera, painted portraits were the main way to record a person's "appearance" (what they looked like). But by the time the Impressionists started painting, there were many photographers who had studios where people could go to be photographed. As cameras improved, photographers started taking "snapshots" of scenery and people outdoors.

Photography had two effects on painters. Firstly, it meant that it was much harder for them to live by painting portraits. Many artists became very poor. Secondly, the image taken by a camera often has interesting angles and viewpoints that are not usually painted by artists. Impressionist painters were able to learn from photographs. Many Impressionist paintings make the viewer feel as if they were right there, looking at the scene through the eyes of the artist.

Impressionist painters did not paint from their imagination, from literature, history or mythology like most other painters of the 19th century. They painted what they saw in the world around them: the town where they lived, the landscape where they went on holiday, their family, their friends, their studios and the things that were around their home. Sometimes they were "commissioned" (given a job) to paint a portrait of someone.

Impressionist painters liked to paint "ordinary" things that were part of everyday life. They painted women doing the washing and ironing, ballet dancers doing exercises, horses getting ready for a race and a bored-looking waitress serving a customer. Nobody, before the Impressionists, had ever thought that these subjects were interesting enough to paint.

Monet, Cliffs at Pourville. The bright-coloured paints have been used without mixing them.

Another artist, Eugene Boudin, used to sit on the beach at Deauville with his oil paints, and make quick paintings of the people on holiday. They would sometimes buy his paintings as souvenirs.

Claude Monet met Boudin and learnt that the only way to "capture" the way that a landscape looked at a particular time was to paint small pictures, very quickly, and without bothering to mix the paints up to make nice smooth even colours. Impressionist painters would use big brushstrokes of different bright colours and let them get mixed up on the canvas, instead of carefully mixing them up on a palette first. By painting in this way, without bothering with the details, Impressionist painters capture a realistic "impression" of a the world that they saw around them.

Some of the things that they painted were: snow gently falling over a town, mist rising on a river in the pink morning light, people walking through a field of wheat with bright red poppies growing in it, sunlight dappling through leaves onto people dancing, a train sending up clouds of smoke in a big railway station, and water lillies floating on a pool under drooping willows.

Most Impressionist landscape paintings are small, so that the artist could carry them outdoors. Some artists, particularly Claude Monet, would take several canvases, and as the day went on and the light changed, he would put down one and take up another. He rented a room from which he could see Rouen Cathedral so that he could paint it from the window at different times of day. Monet also did a series of Haystack paintings, showing them standing in the field from different angles and in all sorts of weather, bright sunshine, morning frost and snow. Paintings that are done outdoors are called "plein air" paintings. The Impressionist painters often used to go out together on painting trips, so there are many pictures that can be compared.

The term "impressionism" has been used for other forms of art, such as writing and music. Octave Mirbeau is often described as an impressionist writer. In 1887, music critics said the works of Claude Debussy were impressionist. Later, other composers were also described as impressionist, including Maurice Ravel, Paul Dukas, Erik Satie and Albert Roussel.

Click on each image to enlarge it, to see the way each artist has used brush-strokes and colour.

Changing seasons in the town[edit]

Timeline: Lives of the Impressionists[edit]