Cut the Crap is the sixth and final studio album by the English punk band The Clash, released on 4 November 1985 by Epic Records. It was recorded in early 1985 at Weryton Studios, Munich, following a turbulent period: co-founder, lead guitarist and co-principal songwriter Mick Jones and drummer Topper Headon had been dismissed by lead vocalist Joe Strummer and bassist Paul Simonon. Their recently re-instated manager Bernie Rhodes replaced Jones and Headon with three unknowns: guitarists Vince White and Nick Sheppard and drummer Pete Howard. During the tense recording sessions, Rhodes and Strummer fought for control over the band's songwriting and musical direction.

Strummer wrote most of the songs. During production, Rhodes tried to take control of arrangements, track sequencing and the final mix. His production choices, which rely heavily on synthetic drum sounds and sampling, are widely derided. One writer described the album’s sound as brash and seemingly "designed to sound hip and modern—'80s style!". Rhodes chose the often-mocked album title, taken from a line in the 1981 post-apocalyptic film Mad Max 2. On release, Cut the Crap was maligned in the UK music press as "one of the most disastrous [albums] ever released by a major artist".[1] Strummer disowned the album and split up The Clash within weeks of its release. 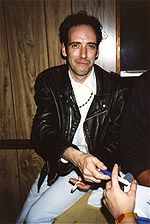 The relationship between Strummer and Jones had broken down by this point. Not long into rehearsals, Strummer and Simonon had fired Jones.[2.1] A week before the official announcement of the dismissal, Strummer, Simonon and Rhodes began to look for replacements and met Pete Howard.[1.1][2.2] The band placed anonymous advertisements for replacement guitarists in Melody Maker. After auditioning over 100 candidates, they eventually hired unknown musicians Nick Sheppard and Greg White. White took the pseudonym Vince after Simonon complained that he would prefer to quit than play in a band with someone named Greg.[1][2.3] Both were given a weekly wage of £100 rather than recording contracts.

Strummer had been the band's principal lyricist, while Jones had written their music. [1.2] After Jones was fired, the band assumed that anyone could write a punk song. This proved to be a mistake and, unknown to members of the Clash, Rhodes had already conceived his own solution to Jones's departure—he would take control of the music.

Rhodes suddenly ended the recordings and took the master tapes from the studio, after which he added further synthesizer parts.[1.3] Although Jones's use of synthesizers and samplers was one of the main reasons behind his dismissal, those instruments brought him critical and public acclaim with his next band Big Audio Dynamite. When asked at the time for his opinion on the debut B.A.D. album, Strummer described it as one of the "worst pieces of shit I have ever heard." In 1986, Strummer said that he had liked a few of the tunes but "really I hated it ... I didn't hear [the album as a whole] until it was in the shops." Strummer ultimately lost control of Cut the Crap to Rhodes, and became so disillusioned that at one point he asked Jones to rejoin the band, but was refused.[1.4]

Simonon does not appear on any of the final recordings; the bass lines were performed by Norman Watt-Roy, former member of the Blockheads, who was not credited on the sleeve. Howard's exclusion from the album has been lamented by many critics. Knowles described him as an "astonishingly powerful and prodigious" drummer, and said that replacing him with electronic percussion was "like replacing a Maserati with a Matchbox".[1.5] Regretting the decision, Strummer later vowed to never use a drum machine again.[1.6][1.7]