Jump to content
Not to be confused with Deer Abbey or Dear Abbeys. 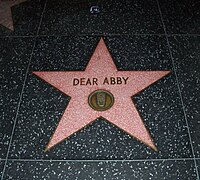 Dear Abby is the name of the advice column founded in 1956 by Pauline Phillips under the pen name Abigail Van Buren and carried on today by her daughter, Jeanne Phillips, who now owns the legal rights to the pen name.

According to Pauline Phillips, she came up with the pen name, Abigail Van Buren, by combining the name of a Biblical figure, Abigail in the Book of Samuel, with the last name of former U.S. President Martin Van Buren.

The column was syndicated by McNaught Syndicate from 1956 until 1966, when it moved to Universal Press Syndicate. Dear Abby's current syndication company claims the column is known for its "uncommon common sense and youthful perspective".[1]

A similar column, Ask Ann Landers, was written from 1955 to 2002 by Pauline's twin sister Eppie Lederer.