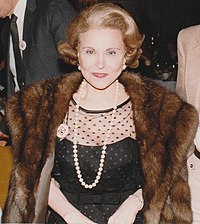 Ann Landers was a pen name created by Chicago Sun-Times advice columnist Ruth Crowley in 1943 and taken over by Eppie Lederer in 1955.[1] For 56 years, the Ask Ann Landers syndicated advice column was a regular feature in many newspapers across North America. Due to this popularity, 'Ann Landers', though fictional, became something of a national institution and cultural icon.

The creator of the 'Ann Landers' pseudonym was Ruth Crowley, a Chicago nurse who had been writing a child-care column for the Sun since 1941. She chose the pseudonym at random — borrowing the surname 'Landers' from a family friend — in order to prevent confusion between her two columns. Unlike Lederer, Crowley kept her identity as Landers secret, even enjoining her children to help her keep it quiet.[2] Crowley took a three-year break from writing the column from 1948 until 1951. After 1951 she continued the column for the Chicago Sun-Times and in syndication (since 1951[2]) to 26 other newspapers until her death, aged 48, on July 20, 1955. Crowley spent a total of nine years writing advice as 'Ann Landers'.

In the three-month period after Crowley’s death, various writers, including Connie Chancellor, took over the column.[2] 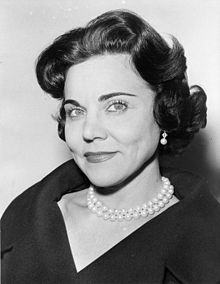 Lederer won a contest to become the new writer of the column, debuting on October 16, 1955.[3] The column opened with a letter from a "Non-Eligible Bachelor", who despaired of getting married. Her advice was "You're a big boy now... don't let spite ruin your life".[4] Lederer went on to advise thousands of other readers over the next several decades. Eventually, she became owner of the copyright. She chose not to have a different writer continue the column after her death, so the "Ann Landers" column ceased after publication of the few weeks' worth of material which she had written before her death.[5]

Lederer, as Landers, used a writing style that was direct, and often critical. She would often upbraid a letter-writer with the quip, "Watch it, bub!"[citation needed] Sometimes she expressed unpopular opinions. She repeatedly favored legalization of prostitution and was pro-choice, yet denounced atheist Madalyn Murray O'Hair.[6] In 1973, she wrote in support of the legalization of homosexual acts, saying that she had been "pleading for compassion and understanding and equal rights for homosexuals" for 18 years,[7] and in 1976 writing that she "fought for the civil rights of homosexuals 20 years ago and argued that they should be regarded as full and equal citizens.[8] Nevertheless, she described homosexuality as "unnatural", a "sickness", and a "dysfunction".[9][10][11] However, she eventually reversed her opinion in 1992, after reviewing research and receiving nearly 75,000 letters that gays and lesbians wrote to her saying that they were happy being gay, writing that "it is my firm conviction that homosexuality is not learned behavior," adding that while being gay could be suppressed, it could not be altered.[12][13]

In 1995, Eppie commented thus in The New Yorker about Pope John Paul II: "He has a sweet sense of humor. Of course, he's a Polack. They're very anti-women." Polish-Americans responded with outrage. She issued a formal apology, but refused to comment further. The Milwaukee Journal Sentinel canceled her column after that incident. In that same article, she had noted that President John F. Kennedy's father, Joseph P. Kennedy, Sr., was anti-Semitic.[14]

A 1995 "Ann Landers" column said, "In recent years, there have been reports of people with twisted minds putting razor blades and poison in taffy apples and Halloween candy. It is no longer safe to let your child eat treats that come from strangers." The vague warning was criticized for causing needless fear, as there have been no documented cases of children receiving poisoned candy during door-to-door Halloween trick-or-treating.[15]

In her March 28, 1965, column, regarding ownership of wedding gifts, Lederer wrote that "the wedding gifts belong to the bride". She went on to state that the bride should "consult a lawyer about the checks. In some states this could be considered community property". The advice was mistaken because only gifts given after the marriage would be considered community property in some states (or else because wedding gifts—if so designated—can be considered back-dated gifts to the bride). The column has provided teaching material for law professors and law students.[16]

In a 1996 column, she "informed" her readers that they should avoid throwing rice at weddings, lest birds eat it and explode. Such advice was erroneous, as milled rice is not harmful to birds.[17]. This column may be the origin of the now-prevalent use of birdseed instead of rice at weddings.[18]

A few months after Eppie Lederer took over as Ann Landers, her twin sister Pauline Phillips introduced a similar column, Dear Abby, which produced a lengthy estrangement between the two sisters.[20] Pauline Phillips wrote her column until her retirement in 1995.