Cat pheromones are pheromones that are used by cats and other felids for cat communication.

A preparation that claims to mimic the feline facial pheromone is commercially available under the name Feliway.[1] This product contains common fatty acids as active ingredients, mixed with Valeriana officinalis essential oil as attractant.[2] Valeriana officinalis is known for its behavioural effects on cats, similar to Nepeta (catnip). 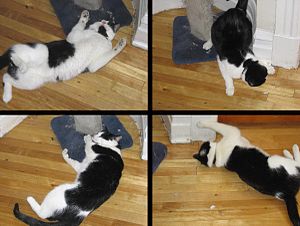 A domestic cat demonstrating the effects of catnip such as rolling, pawing, and frisking

Cat attractants are odorants and constituents of essential oils that have an apparent effect on cat behavior. A cat presented with a cat attractant may roll in it, paw at it, or chew on the source of the smell. The effect is usually relatively short, lasting for only a few minutes after which the cats have a refractory period during which the response cannot be elicited. After 30 minutes to two hours, susceptible cats gain interest again. These compounds might mimic the feline facial pheromone.

Cat urine, especially that of male cats, contains the putative cat pheromone 3-mercapto-3-methylbutan-1-ol (MMB), a compound that gives cat urine its typical odor. The MMB precursor felinine is synthesized in the urine from 3-methylbutanol-cysteinylglycine (3-MBCG) by the excreted peptidase cauxin. Felinine then slowly degrades into the volatile MMB.[5]

Cat urine smell is highly aversive to rats and mice, but after infection with the parasite Toxoplasma gondii, they are attracted by it, highly increasing the likelihood of being preyed upon and of infecting the cat.[6]