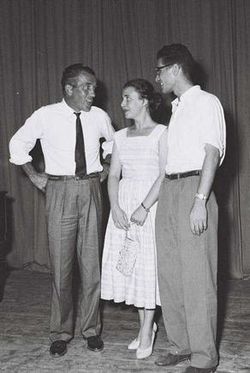 Bracha Eden was born on 15 July 1928, in Jerusalem. Alexander Tamir was born as Alexander Wolkovsky on 2 April 1931, in Vilnius, Lithuania. In 1942, as an eleven-year old boy, he composed a Yiddish song called "Shtilar, shtilar" ("Ponar" in Hebrew; meaning "Quiet, quiet"), for a music competition in the Jewish ghetto. The song was set as a lullaby in order to confuse the Nazi occupiers. Many of the intended singers were killed before they could compete. The story of this episode and Tamir's recent return to his birth place has been told in the Israeli film Ponar.[1][2][3] He changed his name to Tamir after settling in Jerusalem after World War II.[4] Some of the duo's earlier recordings, originally issued under names "Bracha Eden and Alexander Tamir" now appear under the names "Bracha Eden and Alexander Wolkovski".[5][6][7]

They met while studying at the Rubin Academy with Alexander Schroeder, a pupil of Artur Schnabel. Schroeder encouraged them to play as a duo and they formed their piano duo team in 1952. They continued their studies with Vronsky & Babin in the United States. Their duo debut was in 1954 in Israel. They won the 1957 Vercelli Competition and toured regularly in many countries, appearing both in recital and as concerto performers with the great orchestras of the world.[8] They later became senior professors at the Rubin Academy, and Tamir was at one time dean of the academy.[9]

They founded the Max Targ Chamber Music Center in Ein Kerem in 1968[8], and Tamir founded the Young Artists Competition[9] and the Israel Chopin Society.[10] He is a member of the board of the International Federation of Chopin Societies.[11]

During the 1990s they began to perform and teach regularly in China, Russia, and Poland, and in 1997 they became directors of the International Duo Piano Seminary.[8]

Their students include Stanislava Varshavski and Diana Shapiro[12] (Tamir being the one to first suggest they play as a duo).[13]

Very little is recorded about the life of Bracha Eden. She was the elder partner and appears to have been very shy of publicity. In her professional life she was, perhaps, completely overshadowed by her partner. Their partnership, the music they produced, was truly amongst the most accomplished of all duet soloists. However it is known that Eden and Tamir recorded the complete works for two pianos and piano duet of Brahms, Mendelssohn, Mozart, Rachmaninoff, Schubert and Schumann, and individual works by Bach, Bartók, Debussy, Poulenc, Ravel and many others.[8] They were awarded the Grand Prix du Disque for their recording of Brahms Sonata in F minor for Two Pianos, Op. 34b.[14]

They gave the American premiere of Lutosławski's Paganini Variations (1955) and, at the suggestion of Stravinsky himself, were the first to perform and record the piano duet version of The Rite of Spring.[8] They also recorded the four Brahms symphonies in the composer's own transcription for two pianos.[14] They have also presented neglected works for two pianos, including music by Clementi, Dussek and Hummel.[15]