The Boston martyrs is the name given in Quaker tradition to the three English members of the Society of Friends, Marmaduke Stephenson, William Robinson and Mary Dyer, and to the Friend William Leddra of Barbados, who were condemned to death and executed by public hanging for their religious beliefs under the legislature of the Massachusetts Bay Colony in 1659, 1660 and 1661. Several other Friends lay under sentence of death at Boston in the same period, but had their punishments commuted to that of being whipped out of the colony from town to town.

"The hanging of Mary Dyer on the Boston gallows in 1660 marked the beginning of the end of the Puritan theocracy and New England independence from English rule. In 1661 King Charles II explicitly forbade Massachusetts from executing anyone for professing Quakerism. In 1684 England revoked the Massachusetts charter, sent over a royal governor to enforce English laws in 1686, and in 1689 passed a broad Toleration act."[1][2]

The settlement of Boston was founded by Puritan chartered colonists of the Massachusetts Bay Colony under John Winthrop, and acquired the name of Boston soon after the arrival of the Winthrop Fleet in 1630. It was named after Boston, Lincolnshire in England. During the 1640s, as the English Civil War reached its climax, the founder of English Quakerism George Fox (1624–1691) discovered his religious vocation. Under the Puritan English Commonwealth led by Oliver Cromwell, the Quakers in England were persecuted, and during the 1650s various parties of Quakers left England as 'Publishers of Truth'.

Mary Dyer was an English Puritan living in the Massachusetts Bay Colony at Boston. In 1637 she supported Anne Hutchinson, who believed that God 'spoke directly to individuals' and not only through the clergy. They began to organize groups for Bible study in contravention to Massachusetts Colony law, and for this 'Antinomian heresy' she and her husband William Dyer, Anne Hutchinson, and others were banished from the colony in January 1637/8. They removed to Portsmouth in the Rhode Island colony together with the religious group they had formed.

File:EmbarkationPilgrims.jpg
The Pilgrims on the Speedwell

In 1656 the Voyage of the Speedwell from England to Boston brought eight Quakers including Christopher Holder and John Copeland. (Speedwell was the ship which had first set out for the Americas with the Mayflower in 1620, but was forced to return to Plymouth having transferred her party of Pilgrims to the Mayflower.) As required by Boston law their arrival was notified, and they were brought immediately to court and imprisoned on the orders of Governor John Endecott, under sentence of banishment. While they were in prison Mary Dyer and Anne Burden arrived in Boston and were also imprisoned. After eleven weeks Holder, Copeland and the other six Quakers of the Speedwell were deported to England, but they immediately took steps to return.

In July 1657 the second party of Quakers for Massachusetts (including six that had been aboard the Speedwell), in the Voyage of the Woodhouse, undertaken by her owner Robert Fowler of Bridlington Quay, Yorkshire, England, made land at Long Island. With encouraging intuitions, five were put ashore at the Dutch plantation of New Amsterdam (New York), namely Robert Hodgson, Richard Doudney, Sarah Gibbons, Mary Weatherhead and Dorothy Waugh.

Mary Dyer, who had gone back to England with Roger Williams and John Clarke (1609-1676) in 1652, had there heard the ministry of George Fox and became a Friend, and she and her husband also returned to Rhode Island in 1657. Holder and Copeland returned to Massachusetts and met with and convinced other Friends in Sandwich and other towns, but were arrested at Salem by Endecott and imprisoned for several months. They were released, but in April 1658 were rearrested at Sandwich and whipped. In June they went to Boston and were again arrested, and Holder's right ear was cut off as a judicial penalty. Katherine Scott, Anne Hutchinson's sister, spoke up for them and was imprisoned and whipped.

At the end of 1658 the Massachusetts legislature, by a bare majority, enacted a law that every member of the sect of Quakers who was not an inhabitant of the colony but was found within its jurisdiction should be apprehended without warrant by any constable and imprisoned, and on conviction as a Quaker, should be banished upon pain of death, and that every inhabitant of the colony convicted of being a Quaker should be imprisoned for a month, and if obstinate in opinion should be banished on pain of death. Some Friends were arrested and expelled under this law.

Marmaduke Stephenson had been a ploughman in Yorkshire in England in 1655, when he felt what he believed to be the love and presence of the living God as he followed the plough. Leaving his family to the Lord's care, he followed the divine prompting to Barbados in June 1658, and after some time there he heard of the new Massachusetts law and passed over to Rhode Island. There he met William Robinson, another Friend from the company of the Woodhouse, and in June 1659 with two others they went into the Massachusetts colony to protest at their laws. Mary Dyer went for the same purpose. The three were arrested and banished, but Robinson and Stephenson returned and were again imprisoned. Mary Dyer went back to protest at their treatment, and was also imprisoned. In October 1659, Endecott, as per the instruction of the law previously passed, pronounced sentence of death upon the three.

The execution day was Thursday 27 October (the usual weekly meeting day for the Church in Boston) 1659, and the gallows stood on Boston Common. They spoke as they were led there, but their words were drowned out by the sound of drums. After they had taken leave of one another, William Robinson first ascended the ladder. He told the people it was their day of visitation, and desired them to mind the light within them, the light of Christ, his testimony for which he was going to seal with his blood. At this the Puritan minister shouted "Hold thy tongue, thou art going to die with a lie in thy mouth." The rope was adjusted, and, as the executioner turned the condemned man off, he said with his dying breath, "I suffer for Christ, in whom I live and for whom I die." Then Marmaduke Stephenson stepped up the ladder and said "Be it known unto all this day that we suffer not as evil-doers, but for conscience sake." He was turned off the gallows, saying "This day shall we be at rest with the Lord." In memory of this, October 27 is now International Religious Freedom Day to recognize the importance of Freedom of religion. 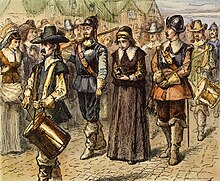 Mary Dyer also stepped up the ladder, her face was covered and the halter put round her neck, when the cry was raised, "Stop! for she is reprieved." She was again banished, but returned in May 1660. Since her reprieve others, both colonists and visiting Friends, had brought themselves within the capital penalty, but the authorities had not ventured to enforce it. After ten days Endecott, at the bidding of the courts, sent for her, and asked her if she were the same Mary Dyer who had been there before. On her avowing this, the death sentence was passed and executed.[3] Another Friend, William Leddra of Barbados, was executed on 14 March 1661.[4]

Others lay in prison awaiting sentence but were set at liberty, and a new law was passed substituting whipping out of the colony from town to town. Shortly after, the 'King's Missive' reached Boston and showed the royal disapproval of the policy of persecution. When the last Friend to be condemned to death (Wenlock Christison, afterwards released) had received his sentence, he had said:

Do not think to weary out the living God by taking away the lives of his servants. What do you gain by it? For the last man you put to death, here are five come in his room. And if you have power to take my life from me God can raise up the same principle of life in ten of His servants and send them among you in my room.