The Famous Five or The Valiant Five were five Canadian women who asked the Supreme Court of Canada to answer the question, "Does the word 'Persons' in Section 24 of the British North America Act, 1867, include female persons?" in the case Edwards v. Canada (Attorney General).[1] The petition was filed on August 27, 1927,[2] and on 24 April 1928, Canada's Supreme Court summarized its unanimous decision that women are not persons.[1] The last line of the judgement reads, "Understood to mean 'Are women eligible for appointment to the Senate of Canada,' the question is answered in the negative." This judgement was overturned by the British Judicial Committee of the Privy Council. This case, which came to be known as the Persons Case, had important ramifications not just for women's rights but also because in overturning the case, the Judicial Committee of the Privy Council engendered a radical change in the Canadian judicial approach to the Canadian constitution, an approach that has come to be known as the "living tree doctrine".

Statue in downtown Calgary of the Famous Five. An identical statue exists on Parliament Hill in Ottawa

The five women were:

None of the five became senators; the first female senator was Cairine Reay Wilson, appointed four months after the ruling. Nearly 80 years later, on 8 October 2009, the Senate voted to make the five the first "honorary senators."[3][4] 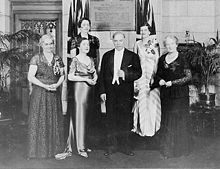 Opinions on the Valiant Five vary considerably. Many laud them as trailblazers for women. Others are disturbed by the opinions of some of the women on other issues, such as non-white immigration and their successful campaigns to have eugenics legislation introduced in Canadian provinces. Some might well question the overall significance of the decision, noting that by the 1920s, the Senate of Canada was a largely powerless body. The more powerful House of Commons of Canada had elected its first female member (Agnes Macphail) in 1921, well before the Persons Case. However, the precedent did establish the principle that women could hold any political office in Canada. Moreover, the Five clearly did devote their energies to increasing women's participation on legislative bodies with greater power: two became members of the Alberta Legislature and one a member of the House of Commons. The controversy surrounding the women has made commemoration difficult.

The Valiant Five have been commemorated with a plaque in the antechamber of Canada's Senate and two statues sculpted by Canadian artist Barbara Paterson. One on Canada's Parliament Hill in Ottawa, Canada, and the other at the Olympic Plaza in Calgary, located in the women's home province of Alberta. The statue on Parliament Hill was unveiled on October 18, 2000, in a public ceremony that included French and English singers, Inuit dancers, and speeches by Governor General Adrienne Clarkson and Prime Minister Jean Chrétien. The City of Edmonton has named five parks in its River Valley Parks System in honour of the "Famous Five".

Along with Thérèse Casgrain, the Five were commemorated in the 2001 Journey Series of Canada's fifty-dollar bill.[1] In December 2011 it was announced that the famous five would not be on the new $50 dollar Frontier Series bill scheduled for distribution in 2012.[5]