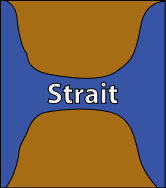 A strait is a naturally formed, narrow, typically navigable waterway that connects two larger bodies of water. It most commonly refers to a channel of water that lies between two land masses, but it may also refer to a navigable channel through a body of water that is otherwise not navigable, for example because it is too shallow, or because it contains an unnavigable reef or archipelago.

The terms channel, pass or passage, can be synonymous and used interchangeably with strait, although each is sometimes differentiated with varying senses. In Scotland firth or kyle are also sometimes used as synonyms for strait.

Many straits are economically important. Straits can be important shipping routes, and wars have been fought for control of them.

Numerous artificial channels, called canals, have been constructed to connect two bodies of water over land, such as the Suez Canal. Although rivers and canals often provide passage between two large lakes or a lake and a sea, and these seem to suit the formal definition of strait, they are not usually referred to as such. The term strait is typically reserved for much larger, wider features of the marine environment. There are exceptions, with straits being called canals, Pearse Canal, for example.