Robert B. Sherman & Richard M. Sherman at the London Palladium in 2002 during the premiere of Chitty Chitty Bang Bang: The Stage Musical.

The Sherman Brothers are an American songwriting duo that specialize in musical films, made up of Robert B. Sherman (born December 19, 1925) and Richard M. Sherman (born June 12, 1928).

The Sherman Brothers wrote more motion-picture musical song scores than any other songwriting team in film history.[1] Film scores of the Sherman Brothers include Mary Poppins, Chitty Chitty Bang Bang, The Jungle Book, and The Aristocats.

Sons of Russian-Jewish immigrants, Robert and Richard Sherman began writing songs together in 1951 on a challenge from their father, Tin Pan Alley songwriter Al Sherman. The brothers wrote together and with different songwriting partners throughout the rest of the decade.

In 1958, Robert founded the music publishing company Music World Corporation, which later enjoyed a landmark relationship with Disney's BMI-affiliated publishing arm, Wonderland Music Company. That same year, the Sherman Brothers had their first top-ten hit with "Tall Paul," sung by Mouseketeer Judy Harriet on the Surf Records label and then covered by Mouseketeer Annette Funicello. The success of this song yielded the attention of Walt Disney, who eventually hired the Sherman Brothers as Staff Songwriters for Walt Disney Studios. The first song they wrote on personal assignment by Walt Disney was "Strummin' Song" in 1961. It was used in the Annette Funicello made-for-television movie called The Horsemasters.

While at Disney, the Sherman Brothers wrote more motion-picture musical scores than any other songwriters in the history of film. They also wrote what is perhaps their best-known song, "it's a small world (after all)" for the 1964 New York World's Fair. Since then, some have claimed that this has become the most translated and performed song on Earth, although this is largely due to the fact that it is played continuously at Disney's theme park "it's a small world" attractions of the same name.[2]

Robert and Richard Sherman worked directly for Walt Disney, completing the scores for the live-action musical films The Happiest Millionaire and The One and Only, Genuine, Original Family Band until Disney's death in 1966. Since leaving the company, the brothers have worked freelance as songwriters on scores of motion pictures, television shows, theme-park exhibits, and stage musicals.

In 1970, the Shermans returned to Disney for a brief stint where they completed work on The Aristocats and Bedknobs and Broomsticks. The latter film garnered the brothers their fourth and fifth Oscar Nominations, respectively. 1972 saw the release of Snoopy Come Home, for which the brothers received a Grammy nomination.

In 1973, the Sherman Brothers also made history by becoming the only Americans ever to win First Prize at the Moscow Film Festival for Tom Sawyer, for which they also authored the screenplay.

In 1976, “The Slipper and the Rose” was picked to be the Royal Command Performance of the year. The performance was attended by Her Majesty Queen Elizabeth, the Queen Mother. A modern musical adaptation of the classic Cinderella story, "Slipper", also featured songs, score, and screenplay by the Sherman Brothers. Two further Academy Award nominations were garnered by the brothers for the film. That same year the Sherman Brothers received their star on the Hollywood "Walk of Fame" directly across from Grauman's Chinese Theater.

Outside the motion-picture realm, their Tony Award-nominated smash hit Over Here! (1974) was the biggest-grossing original Broadway musical of that year. The Sherman Brothers have also written numerous top selling songs including "You're Sixteen," which reached Billboard's Hot 100 top 10 twice: first with Johnny Burnette in 1960 and then at #1 with Ringo Starr more than thirteen years later. Other top-ten hits include "Pineapple Princess," "Let's Get Together," and more.

In 2002, Chitty hit the London stage, receiving rave reviews. Chitty Chitty Bang Bang is currently the most successful stage show ever produced at the London Palladium, boasting the longest run in that century-old theater's history. On April 28, 2005, a second Chitty company premiered on Broadway (New York City) at the Foxwoods Theatre. The Sherman Brothers wrote an additional six songs specifically for the new stage productions. A successful third company of Chitty is currently touring throughout the United Kingdom.

In 2003, four Sherman Brothers' musicals ranked in the Top 10 Favorite Children's Films of All Time in a British nationwide poll reported by the BBC. Most notably, Chitty Chitty Bang Bang (1968) topped the list at #1.

In recent years, with Robert's move to London, England, United Kingdom, the brothers have written many new songs for the stage musical presentations of Chitty Chitty Bang Bang and Mary Poppins, produced collaboratively by Disney and Cameron Mackintosh.

For their contributions to the motion picture industry, the Sherman brothers have a star on the Hollywood Walk of Fame at 6918 Hollywood Blvd. and were inducted into the Songwriters Hall of Fame on June 9, 2005. On November 16, 2006, Mary Poppins premiered at the New Amsterdam Theatre on Broadway.

On November 17, 2008 the Sherman Brothers received the National Medal of Arts which is the highest honor conferred upon artists or patrons of the arts by the United States Government. The award was presented by United States President George W. Bush in an East Room ceremony at The White House.

On May 22, 2009, The Boys: the Sherman Brothers’ Story, a critically acclaimed documentary film about the pair, was theatrically released. The film was directed and produced by their sons, Gregory V. Sherman and Jeff Sherman, and distributed by Walt Disney Pictures. Ben Stiller acted as executive producer for the film. The movie’s tag line is “Brothers. Partners. Strangers,” as the film deals with professional growth of the Academy Award-winning composing team who are best known for their up-beat Disney music, and their later estrangement. It contains interviews with family members and several individuals in the film industry, including actors such as Julie Andrews and Dick Van Dyke (who worked with the Sherman Brothers on Mary Poppins), producers (Roy E. Disney), fellow film composers (John Williams and Stephen Schwartz), and film critics (Leonard Maltin). The film premiered at the San Francisco Film Festival and the Newport Beach Film Festival in April 2009. The DVD, which contains a full hour of bonus material, was released on November 30, 2010.

In October 2009, Disney released a 59 track, two CD compendium of their work for the studio spanning forty-two years. The CD is titled "The Sherman Brothers Songbook". 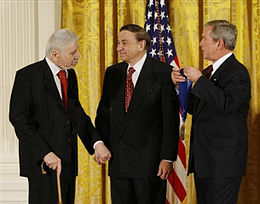 The Sherman Brothers receive the National Medal of Arts, the highest honor bestowed upon artists from the United States Government. Left to right: Robert B. Sherman, Richard M. Sherman and U.S. President George W. Bush at The White House, November 17, 2008.

Since 2002, Robert Sherman has lived in London, England. He moved from Beverly Hills, while Richard Sherman remained in California. Surprisingly, however, the separation did not impede the brothers' collaborative process; they have credited this to the technological advents of fax machines, e-mail and low-cost international telephone service. Also, both brothers travel between Los Angeles, New York, and London frequently, which also facilitates their work. Since Robert's move, the brothers have continued to collaborate on various musical plays as well as a feature-length animated film musical that incorporates an original story, song score and screenplay.[4]

The London Palladium in 2004 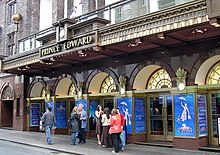