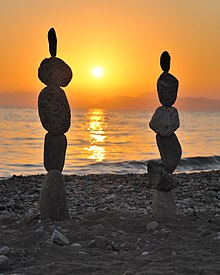 Rock balancing is an art, discipline, or hobby depending upon the intent of the practitioner, in which rocks are balanced on top of one another in various positions.

Rock balancing can be a performance art, a spectacle, or a devotion, depending upon the interpretation by its audience. Essentially, it involves placing some combination of rock or stone in arrangements which require patience and sensitivity to generate, and which appear to be physically impossible while actually being only highly improbable. The rock balancer may work for free or for pay, as an individual or in a group, and their intents and the audiences' interpretations may vary given the situation or the venue.