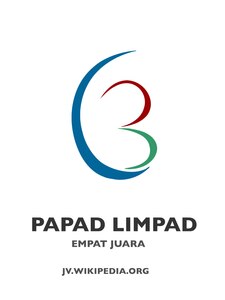 Papat Limpad (English: Fantastic Four) is a seven-month writing competition in the Javanese-language Wikipedia.[1] The purpose of this competition is to revitalize the "barely alive" Javanese-language Wikipedia.[2] Javanese Wikipedia started in January 2003, began to have a larger number of regular contributors in mid-2006, and began to see its golden era for seven years in 2008. However, the activity decreased and returned to 2006 status, with only 2 to 1 regular contributors for the last two years. The Javanese language Wikipedia ranked 71 in the number of pages being viewed by 1.2 million viewers a month (before intervention). Wikimedia Indonesia believes that Javanese Wikipedia has an untapped potential growth and an untapped potential editor base that needs to be reached.

As incentive to 100 students that will compete writing in Javanese language Wikipedia for seven months, four laptops will be given to top writer contributors, while one laptop will be given to the head of Javanese Language Academy Major.

On February 2011, Wikimedia Indonesia began an intensive training to Semarang committee, the training include project management, competition monitoring, documentation, and reporting. Five people are selected with task distribution of coordinator and member of the committee.

After one month committee training, the competition began on March 21, 2011 and ended on October 13, 2011. Exactly during the celebration of "Language Month" (October).

The impact of the project on WMF mission goals of Increased Reach, Increased Quality, Increased Credibility, Increased and Diversified Participation is shown by the increasing very active Wikipedian as illustrated in the statistics.

Javanese language revitalization project has a simple goal: a sustainable growth for six months in 2011 with minimum of six very active user and outreach in Javanese language population city.