Jump to content
From Wikipedia, the free encyclopedia
Documentary film on the making of Magna Carta (An Embroidery)

Magna Carta (An Embroidery) is a 2015 work by English installation artist Cornelia Parker.[1] The artwork is an embroidered representation of the complete text and images of an online encyclopedia article for Magna Carta, as it appeared in Wikipedia on 15 June 2014, the 799th anniversary of the document.[1]

The hand-stitched embroidery is 1.5 metres wide and nearly 13 metres long. It is a response to the legacy of Magna Carta in the digital era and Parker has referred to it as "a snapshot of where the debate is right now", the result of all open edits by Wikipedians up to that date.[1] It was commissioned by the Ruskin School of Art at the University of Oxford in partnership with the British Library,[2] after being chosen from proposals from a shortlist of artists in February 2014.[3]

Parker used a screenshot from the 15 June 2014 English Wikipedia article for Magna Carta and printed it onto fabric. Like Wikipedia, the embroidery was created through the collaboration of many individuals. It was divided in 87 sections and sent to 200 individuals who each hand-stitched portions of the artwork. She sought the collaboration of people and groups that have been affected by and associated with Magna Carta.[4] The majority of the text was sewn by prisoners.[5] Members of the Embroiderers' Guild stitched the images, with at least one embroiderer selected from each region of the UK.[6] Many celebrities and public figures also contributed, stitching phrases or words of special significance to them.[7] Parker has represented the work as "Echoing the communal activity that resulted in the Bayeux Tapestry, but on this occasion placing more emphasis on the word rather than the image, I wanted to create an artwork that is a contemporary interpretation of Magna Carta."[1]

The work includes a tea stain from a prisoner and a spot of blood from Guardian editor Alan Rusbridger, who accidentally pricked his finger while sewing.[7]

Magna Carta (An Embroidery) is part of an exhibition celebrating the 800th anniversary of Magna Carta. It is on display in the Entrance Hall of the British Library from 15 May until 24 July 2015.[1] 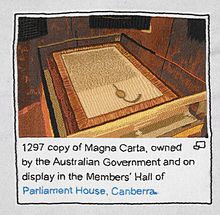 Detail of the work reproducing an image of the 1297 copy of Magna Carta on display in the Members' Hall of Parliament House, Canberra, Australia

Parker invited some 200 people to hand-stitch portions of the work including prison inmates, civil rights campaigners, MPs, lawyers, barons and artists.[1] Much of the work was done by 36 prisoners from 13 different prisons in England, under the supervision of the social enterprise Fine Cell Work.[8] Members of the Embroiderers' Guild contributed the images as did students from the Royal School of Needlework and the embroidery company Hand & Lock.

Parker invited royalty to contribute to the work, but they declined. She said that right-wing people were more likely to decline; both Gordon Brown and Alex Salmond also declined to contribute.[10]

Wikimedia Commons has media related to [[commons:Template:If then show|Template:If then show]].Script error: No such module "Preview warning".
Retrieved from "https://en.wikipedia.beta.wmflabs.org/w/index.php?title=Magna_Carta_(An_Embroidery)&oldid=276999"
Categories: