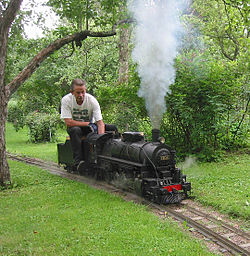 Live steam is steam under pressure, obtained by heating water in a boiler. The steam is used to operate stationary or moving equipment.

A live steam machine or device is one powered by steam, but the term is usually reserved for those that are replicas, scale models, toys, or otherwise used for heritage, museum, entertainment, or recreational purposes, to distinguish them from similar devices powered by electricity or some other more convenient method but designed to look as if they are steam-powered. Revenue-earning steam-powered machines such as mainline and narrow gauge steam locomotives, steamships, and power-generating steam turbines are not normally referred to as "live steam". 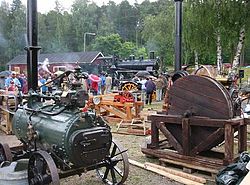 The term live steam usually refers to a model steam locomotive, or any other steam-operated model that is powered by steam produced by boiling water, often built by a hobbyist model engineer. Steam rollers and traction engines are popular, in 1:4 or 1:3 scale, as are model stationary steam engines, ranging from pocket-size to 1:2 scale.

Ridable, large-scale live steam railroading on a backyard railroad is a popular aspect of the live steam hobby, but it is time-consuming to build a locomotive from scratch and it can be costly to purchase one already built. Garden railways, in smaller scales (that cannot pull a "live" person nor be ridden on), offer the benefits of real steam engines (and at lower cost and in less space), but do not provide the same experience as operating one's own locomotive in the larger scales and riding on (or behind) it, while doing so.

One of the most famous live steam railroads was Walt Disney's Carolwood Pacific Railroad around his California home; it later inspired Mr. Disney to surround his planned Disneyland amusement park with a working, narrow gauge railroad.

The live steam hobby is especially popular in the UK, USA, and Australia. All over the world, there are hundreds of clubs and associations as well as many thousands of private backyard railroads. The world's largest live steam layout, with over 25 miles (40 km) of 7 1⁄2 in (190.5 mm) trackage is Train Mountain [1] in Chiloquin, Oregon, USA. Other notable layouts are the one operated by Los Angeles Live Steamers and the one operated by Riverside Live Steamers.

Although not technically live steam, the hobby embraces other scale model locomotives whose prototypes are diesel (gasoline) and electric (battery). A few tracks restrict operation to only live steam engines, such as the Riverside Live Steamers mentioned above, but a visit to most tracks will reveal a mixture of locomotive types.

Railroad gauge refers to the distance between the rails. The ridable track gauges range from 2 1⁄2 in (64 mm) to 15, the most popular being 3½", 4¾", 5", 7¼" and 7½" (see Rail transport modelling scales). Gauges from 10 in (254 mm) and up are called "Miniature Railways" (in the USA these are known as "Grand Scale Railroads"), and are used mostly in amusement park rides and commercial settings.

Often the gauge has little to do with the scale of a locomotive since larger equipment can be built in a narrow gauge railway configuration. For instance, scales of 1.5, 1.6, 2.5, and 3 inches per foot (corresponding to scales of 1:8 to 1:4) have been used on a 7.5 track gauge.

The generally accepted smallest gauge for a live steam locomotive is 45 mm (1.772 in) Gauge 1, although O scale live steam models are also common. Producing smaller-scale models remains problematic, as the laws of physics do not themselves scale: creating a small-scale boiler that produces useful quantities of steam requires careful engineering. Hornby Railways has produced commercial live steam-powered locomotives in OO scale by utilising an electrically heated boiler mounted in the tender, with cylinders in the locomotive, and control provided by electrical- signals fed through the track from a remote control unit. They are less mechanically realistic than models in larger scales; the visible valve gear is a dummy, as on the electric-motor-powered models, and steam admission to the cylinders is controlled by a rotary-valve servo inside the boiler casing, which is also a dummy. Nevertheless, the locomotive is driven by steam that is created on board the locomotive and is hence a genuine steam locomotive.

It is technically possible to build even smaller operating steam engines. Hand-made examples, as small as Z scale (1:220), with a gauge of only 6.5 mm (0.256 in), have been produced.[2] These are fired with a butane flame from a burner in the engine's tender. AA Sherwood of Australia, an engineering lecturer, produced some miniature scale model live steam engines in the late 1960s and early 1970s. His smallest live steam engines were 1:240 scale which is smaller than the 1:220 of Z Scale.[3] The smallest scale Sherwood worked in was 1:480, though that was not live steam.

For basic locomotive models, a simple valve gear can be used, with the reversing (if any) performed by a valve, or by using a "slip" eccentric.

More complex locomotive models can use valve gear similar to real steam machine with the reversing done mechanically, most frequently the Walschaerts type.

There are several common fuels used to boil water in live steam models, depending on their scale:

A live steam festival (often called a "Steam Fair" in the UK and a live steam "meet" in the USA) is a gathering of people interested in steam technology. Locomotives, trains, traction engines, steam rollers and tractors, steam boats and cars, and stationary steam engines may be on display, both full-sized and in miniature. Rides may also be offered.

"Model Engineer" is an English publication that is published twice a month and was founded in 1898. Most locomotive articles have an "English" flavour popular in the UK, Australia, New Zealand and South Africa. The magazine is aimed at constructors but also covers non-steam and non-rail model engineering interests.

"Live Steam" is a U.S. magazine, founded in 1966 and devoted to the live steam hobby, as well as to other uses of miniature and full-size steam. Originally, it was a mimeographed newsletter, but soon expanded into magazine format. In 2005, the name was changed to "Live Steam & Outdoor Railroading". It is currently published bi-monthly, with a press run of slightly over 10,000 (Dec. 2004).

A more recent publication, launched in 2006, is "The Home Railway Journal"[4], which is specifically aimed at enthusiasts with ride-on railways (although not just steam-powered) in North America. It is published quarterly in Sacramento, California, USA.