Letterboxing is an outdoor hobby that combines elements of orienteering, art, and puzzle solving. Letterboxers hide small, weatherproof boxes in publicly-accessible places (like parks)[1] and distribute clues to finding the box in printed catalogs, on one of several web sites, or by word of mouth. Individual letterboxes usually contain a notebook and a rubber stamp.[2] Finders make an imprint of the letterbox's stamp, either on their personal notebook or on a postcard, and leave an impression of their personal stamp on the letterbox's "visitors' book" or "logbook" — as proof of having found the box and letting other letterboxers know who has visited. Many letterboxers keep careful track of their "find count".

The origin of letterboxing has been traced to Dartmoor, Devon, England in 1854. William Crossing in his Guide to Dartmoor states that a well known Dartmoor guide (James Perrott[3]) placed a bottle for visiting cards at Cranmere Pool[4] on the northern moor in 1854.[5] From this hikers on the moors began to leave a letter or postcard inside a box along the trail (sometimes addressed to themselves, sometimes a friend or relative)—hence the name "letterboxing". The next person to discover the site would collect the postcards and post them. In 1938 a plaque and letterbox in Crossing's memory were placed at Duck's Pool on southern Dartmoor.[6][7][8]

The first Dartmoor letterboxes were so remote and well-hidden that only the most determined walkers would find them, allowing weeks to pass before the letter made its way home. Until the 1970s there were no more than a dozen such sites around the moor, usually in the most inaccessible locations. Increasingly, however, letterboxes have been located in relatively accessible sites and today there are thousands of letterboxes, many within easy walking distance of the road. As a result, the tradition of leaving a letter or postcard in the box has been forgotten. 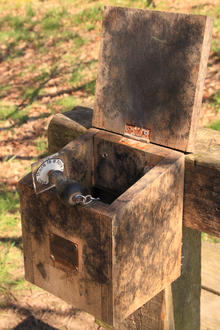 Alec Finlay rubber stamp letterbox poem: "There is a fork in every path".

Today there is a club called the "100 Club", membership of which is open to anyone who has found at least 100 letterboxes on Dartmoor. Clues to the locations of letterboxes are published by the "100 Club" in an annual catalogue. Some letterboxes however remain "word of mouth" and the clues to their location can only be obtained from the person who placed the box. Some clues may also be found in other letterboxes or on the Internet, but this is more commonly for letterboxes in places other than Dartmoor, where no "100 Club" or catalogue exist.[9]

Letterboxing has become a popular sport, with thousands of walkers gathering for 'box-hunts' and while in some areas of Dartmoor it is particularly popular amongst children, some of the more difficult to find boxes and tougher terrain are better suited to more experienced adults.

Letterboxes can now be found in other areas of the United Kingdom including the North York Moors and have spread all over the world. The Scottish artist Alec Finlay[10] has placed letterboxes with rubber stamp circle poems at locations around the world, including Yorkshire Sculpture Park.

Letterboxers organize events called meets or gatherings. The first letterbox meet was held on Dartmoor, and they are now held twice yearly on "clock change days" (in March and October). Gatherings in America are usually at parks or places with enough space for a large group of letterboxers to meet up and do exchanges (exchanging of personal stamps and/or personal travelers), as well as talk and discuss box ideas. Gatherings in America usually have a special, one day "Event stamp." At some gatherings, boxes are created or donated to be planted nearby specifically for the gathering attendees to find.

The first gathering in North America was held in November, 1999, at The Inn at Long Trail in Killington, Vermont.

A choropleth map of all traditional letterboxes recorded in letterboxing.org's database for the contiguous United States.

There are now many different kinds of letterboxes, each with some specific distinction. While purists recognize only those letterboxes planted in the wild, many new variations exist. These include:

Traditional Box
A normal letterbox, hidden and uses clue to find it.

Bonus Box
The clues for these are usually found in a traditional box as an extra one to find. Usually planted in the same area as the traditional that hosts its clue. Clues can be distributed in any way.

Word of Mouth Box (WOMB)
The clue is given by word of mouth, or typed up, but a letterboxer can only receive the clue from the planter.

Personal Traveler
Much like a traditional box, but instead of being planted, the box is kept with the creator at all times. If another letterboxer is met on the trail or at a meet it is attainable if requested. In the US this box is usually only attainable if the other letterboxer knows the password or passphrase which is sometimes cryptic, straightforward, almost non-existent, or silly.

In the US, letterboxes have developed new forms:

Cootie
Much like a hitchhiker, except instead of being carried from letterbox to letterbox, a letterboxer passes it to another letterboxer. It can be passed in a Personal Traveler, or planted on another letterboxer or their unattended bags on the trails or at gatherings. Most people are subtle about planting them—but not all.

Flea
Like a combination of a hitchhiker and a cootie. Either put in a traditional letterbox, like a hitchhiker, or put it on a person, like a cootie.

Hitchhiker Hostel
This is a traditional letterbox with special qualities. Namely, it is a "hostel" for hitchhikers, sized and specially designated to hold multiple hitchhikers at one time. Normally, there are at least one or two hitchhikers in the box at all times, and any letterboxer who takes a hitchhiker out is required to leave a new one in its place. A hitchhiker hostel has its own stamp and logbook, just like a traditional letterbox, and any hitchhiker that is placed within it should be stamped and recorded within the logbook, preferably with both the date of its being added to the hostel (in order to make it easier to move the older hitchhikers out), and the date it is removed.

Virtual
Online letterboxes; actually a scavenger hunt of sorts for an image of a letterbox through different websites, collecting answers to questions posted as the clues to the box. Answers sometimes are unscrambled or simply emailed to the creator the final answer is put in a blank in a web address, which takes the finder to an image of the letterbox online.

Limited time Box
A letterbox that has only been planted for a short amount of time. (A few days or a week, any time length the planter wants.)

Postal (PLB)
Boxes that are made just like traditional letterboxes, but instead of being planted in the wild, they are sent via postal mail to the people on sign up lists for the box, or around a "ring" of people in a postal ring, which is usually focused on a theme of some sort. Postals are also very often very well designed and organized, as well as ornate. Since the box is very unlikely to be stolen, go missing, or be damaged, creators of PLBs tend to get quite creative.

Other
Anything not described as any of the above listings. They could be bonus stamps inside boxes, a stamp you just have to ask for, etc.

Circle poem
A circle poem is a kind of 'art' letterbox developed in Britain. There are one hundred planned boxes, each of which contains a rubber stamp circle poem by the Scottish poet and artist, Alec Finlay. These are sited at locations around the world, and each has its own nominated keeper.

A letterboxer's find count or PFX count is organized as follows:

Some boxers list individual types of boxes in their PFX counts (e.g.: P12 F76 X45 E4 HH21 V4 would mean 12 plants, 76 finds, 45 exchanges, four events or event stamps, 21 hitchhikers, and four virtuals). Some include virtuals, hitchhikers, and other non-traditional boxes in a single find count, while some exclude them. Many letterboxers do not bother to keep count at all.

The "PFX count" is not a term associated with Dartmoor Letterboxing.