Leopold Blaschke was born in Český Dub, Bohemia, to a family which originated from Antoniwald in the Izera Mountains, a region known for processing glass, metals and gems.[1] The family had also spent time in the glassblowing industry of Venice.[2]

Leopold displayed artistic skills as a child, and was apprenticed to a goldsmith and gemcutter. He then joined the family business, which produced glass ornaments and glass eyes.[2] He developed a technique which he termed "glass-spinning", which permitted the construction of highly precise and detailed works in glass. He also Latinised his family name to "Blaschka", and began to focus the business on the manufacture of glass eyes.[1]

In 1853, Leopold was suffering from ill health and was prescribed a sea voyage. He travelled to the United States and back, using the time at sea to study and draw sea animals, primarily invertebrates.[1]

Leopold's son Rudolf was born in 1857, and the family moved to Dresden to give their child better educational opportunities.[1] Leopold began making glass models of exotic flowers which he had seen depicted in books. Prince Camille de Rohan heard about his work, and commissioned 100 models of orchids in his private collection.[2] In 1863,[1] the Staatliches Museum für Tierkunde Dresden commissioned Leopold to produce twelve models of sea anenomes.[2] While these designs were based on drawings in books, Leopold was soon able to use his earlier drawings to produce highly detailed models of other species,[1] and his reputation quickly spread.[2]

Leopold began selling models of marine invertebrates to museums, aquaria, universities and other educational bodies who wanted visual aids but were unable to satisfactorily preserve such animals.[1][2] These represented a great improvement on previous methods of presenting such creatures: drawings, pressing, photographs and papier-mâché or wax models.[1] He gradually extended his range of work by studying marine animals from the North Sea, Baltic Sea and Mediterranean,[1] and later constructed an aquarium at his house, in order to keep live specimens from which to model.[2] 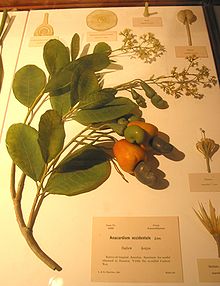 In about 1880, Rudolf began assisting his father with the models. In that year, they produced 131 models of sea slugs, jellyfish, and other animals for the Boston Society of Natural History Museum (now the Museum of Science). These models were seen by George Lincoln Goodale, who was in the process of setting up the Harvard Botanical Museum. In 1886, he travelled to meet the Blaschkas and, with some difficulty, convinced them to produce some new plant models for him.[1] Some reports claim that Goodale saw a few glass orchids in the room where they met, surviving from the work two decades earlier.[3] This commission required the Blaschkas to undertake considerable research into both the plant species and the manufacturing process.[1]

The first few models the Blaschkas sent were badly damaged by U.S. Customs, but Goodale nonetheless appreciated the craftwork and showed them widely. Among the local residents who saw them were Elizabeth C. and Mary Lee Ware, who offered to pay for a long-term contract for the Blaschkas to produce models of plants for the museum.[3] In 1887,[4] the parties signed a contract for the Blaschkas to spend half their time producing models for Harvard. They continued to spend their remaining time making marine invertebrate models. This time, arrangements were made to send the models directly to Harvard, where museum staff could open them safely, observed by Customs staff.[3] In 1890, the Blaschkas signed an exclusive ten-year contract with Harvard, for 8,800 marks per year, to make glass flowers.[4] It was decided that they should be asked to model the widest possible range of plants, and some were to be shown being pollinated, or diseased in some way.[1]

Production of the Glass Flowers[edit]

The Blaschkas used a mixture of clear and coloured glass, sometimes supported with wire, to produce their models.[4] Many pieces were painted, this work being entirely given to Rudolf.[3] In order to represent plants which were not native to the Dresden area, the two studied the exotic plant collections at Stillnitz Castle[4] and the Dresden Botanical Garden, and also grew some from seed sent from the United States.[4] In 1892, Rudolf was sent on a trip to the Caribbean and the U.S. to study additional plants, making extensive drawings and notes.[3]

Rudolf made a second trip to the U.S. in 1895. While he was overseas, Leopold died.[3] Rudolf continued to work alone.[5] By the early twentieth century, he found that he was unable to buy glass of suitably high quality, and so started making his own.[4]

Rudolf continued making models for Harvard until 1938. By then aged 80, old and weary, he announced that he would retire.[6] Neither he nor his father had taken on an apprentice, and Rudolf left no successor.[1] For Harvard alone, Leopold and Rudolf made more than 3,000 models, 780 showing species at life-size, with others showing magnified details.[4]