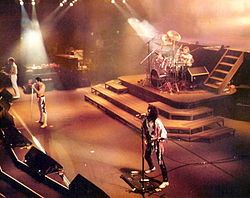 The lead vocalist is the member of a band who sings the main vocal portions of a song. They may also play one or more instruments. Lead vocalists are sometimes referred to as the frontman or frontwoman, and as such, are usually considered to be the "leader" of the groups they perform in, often the spokespersons in interviews and before the public. On some occasions, the frontman of the band is someone other than the lead vocalist (e.g. Fall Out Boy, The Dave Clark Five and AC/DC.)

Other bands, such as Type O Negative, Red Hot Chili Peppers, Oasis, Depeche Mode, System of a Down, Goo Goo Dolls, Avenged Sevenfold, Creed, Alter Bridge, Alice in Chains, The Who, The Rolling Stones, Deep Purple, Wings, The Cars, Panic at the Disco, Sick Puppies, Taking Back Sunday, Rancid, Styx, Status Quo, Skillet and Tantric had, in addition to the designated "lead singer", one or more members who provided significant lead vocals in the course of the group's career.

While the lead vocalist often defines the group's image and personality to the general public, several bands, such as AC/DC, Iron Maiden, Van Halen, Alice in Chains, Fuel, INXS, Helloween, Threshold, Evans Blue, Blessthefall, Killswitch Engage and Escape the Fate have changed lead singers and maintained the original band name and, to some extent, identity. Other bands such as Fleetwood Mac, Journey, Genesis, Anthrax, Misfits, Petra, Drowning Pool, Adema, Deep Purple and Black Sabbath have gone in an almost completely different musical direction with the arrival of a new vocalist.

The lead vocalist of a band is sometimes called a frontman. This term "frontman" refers to the duties of musical leader amongst the band and spokesperson for the band before the public. While lead vocalists or spokespersons for any musical ensembles can be called a frontman, the term is used very widely in rock music. Since the position commonly has an expanded role from simple lead vocalists, there have been cases in which the frontman for a band is someone other than the lead vocalist. For example, Pete Wentz, the bassist for the band Fall Out Boy, is generally called the frontman, both in the media and by the band members themselves, since he represents the band in most interviews and has most contributed to the band's image in the popular media.[1] Additionally, Dave Clark of The Dave Clark Five was the group's drummer, not the main vocalist. Another example is Angus Young of AC/DC, who is the band's lead guitarist.

In several bands (such as Led Zeppelin, Queen and Oasis) the lead guitarist or bassist may share spokesman responsibilities with the lead singer. Usually, this is derived from that guitarist's specific role as a co-songwriter, co-founder and/or co-vocalist. Also in some cases, there are two frontmen, like in the band, Underoath, with singers Spencer Chamberlain and Aaron Gillespie (drummer). Another example is Blink-182, in which vocal duties are split between bassist Mark Hoppus and guitarist Tom DeLonge. Hoppus usually carries out most media either by himself or together with DeLonge, while the band's other member, drummer Travis Barker usually remains quiet.