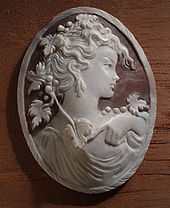 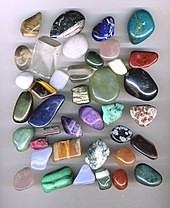 Part of the raw material a lapidary may use. These are tumble-polished gemstones.

Moonstone cabochons in a jewellers window

A lapidary (the word means "concerned with stones") is an artist or artisan who forms stone, mineral, gemstones, and other suitably durable materials (amber, shell, jet, pearl, copal, coral, horn and bone, glass and other synthetics) into decorative items such as engraved gems, including cameos, or cabochons, and faceted designs. Hardstone carving is the term in art history for the objects produced and the craft. Diamond cutters are generally not referred to as lapidaries, due to the specialized techniques which are required to work diamond. Gemcutter typically refers to diamond cutters or producers of faceted jewels in modern contexts, but artists producing engraved gems, jade carvings and the like in older historical contexts.

The arts of a sculptor or stonemason do not generally fall within the definition, though chiseling inscriptions in stone, and preparing laboratory 'thin sections' may be considered lapidary arts. But, figurative engraved gems and cameos are certainly the work of artists. In modern contexts, the term is most commonly associated with jewelry and decorative household items (e.g. bookends, clock faces, ornaments, etc.) A specialized form of lapidary work is the inlaying of marble and gemstones into a marble matrix, known in English as "pietra dura" for the hardstones like onyx, jasper and carnelian that are used, but called in Florence and Naples, where the technique was developed in the 16th century, opere di commessi. The Medici Chapel at San Lorenzo in Florence is completely veneered with inlaid hard stones. The specialty of "micromosaics", developed from the late 18th century in Naples and Rome, in which minute slivers of glass are assembled to create still life, cityscape views and the like, is sometimes covered under the umbrella term of lapidary. In China, lapidary work specializing in jade carving has been continuous since at least the Shang dynasty.

Apart from figurative carving, there are three broad categories of lapidary arts. These are the procedures of tumbling, cabochon cutting, and faceting. The distinction is somewhat loose, and leaves a broad range within the term cabochon. The picture to the left is of a rural, commercial cutting operation in Thailand. This small factory cuts thousands of carats of sapphire annually. 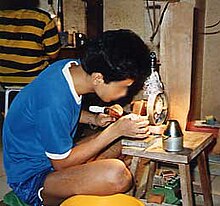 Most lapidary work is done using motorized equipment and resin or metal bonded diamond tooling in successively decreasing particle sizes until a polish is achieved. Often, the final polish will use a different medium, such as tin oxide, glasitite or cerium(IV) oxide. Older techniques, still popular with hobbyists, used bonded grinding wheels of silicon carbide, with only using a diamond tipped saw. Diamond cutting, because of the extreme hardness of diamonds, cannot be done with silicon carbide, and requires the use of diamond tools.

There are also many other forms of lapidary, not just cutting and polishing stones and gemstones. These include: casting, faceting, carving, jewellery, mosaics (eg. little slices of opal on potch, obsidian or another black stone and with a clear dome (glass or crystal quartz) on top. There are lapidary clubs throughout the world. In Australia there are numerous gemshows including an annual gemshow, the Gemborree which is a nation-wide lapidary competition. There is a collection of gem and mineral shows held in Tucson, Arizona, at the beginning of February each year. This group of shows constitutes the largest gem and mineral event in the world. The event was originally started with the Tucson Gem and Mineral Society Show and has now grown to include dozens of other independent shows.

A secondary meaning of lapidary is pertaining to, about, "of inscriptions." Since inscriptions were laboriously chiselled to stone, a "lapidary" writing style is crisp, accurate, formal, and condensed.

Another meaning is a treatise on the subject of precious stones, one example being the so-called Old English Lapidary, a tenth or eleventh-century translation into Anglo-Saxon of earlier Latin glosses on stones mentioned in The Book of Revelation.