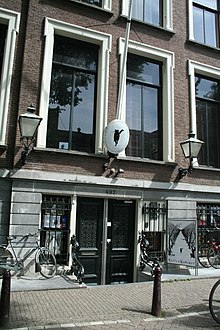 The museum is housed in a canalside building at Herengracht 497, in the grand Gouden Bocht ("Golden Bend") of this canal. The owner of the place is living on the 2nd floor of the building with his family. There are some cats in the museum as well.

The house and the adjacent building at Herengracht 499 were built in 1667 for the patrician brothers Willem and Adriaen van Loon. Through the luck of the draw, Willem was given the house at number 497. Later, the house was inhabited by Amsterdam mayor Jan Calkoen and Amsterdam pensionary Engelbert van Berckel, among others.

John Adams visited van Berckel at the house during his time as U.S. ambassador to the Dutch republic.

In 1985, the building was restored, and in 1990 the museum was founded by Bob Meijer in memory of his red tomcat John Pierpont Morgan (named after the American banker J. P. Morgan).