Kalākaua, born David Laʻamea Kamanakapuʻu Mahinulani Nalaiaehuokalani Lumialani Kalākaua[1] and sometimes called The Merrie Monarch (November 16, 1836 – January 20, 1891), was the last reigning king of the Kingdom of Hawaiʻi. He reigned from February 12, 1874 until his death in San Francisco, California, on January 20, 1891. 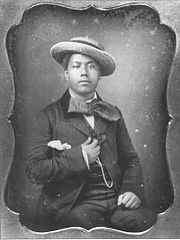 Kalākaua was the second surviving son of his father High Chief Caesar Kaluaiku Kapaʻakea and his mother High Chiefess Analea Keohokālole. He was the older brother of Moses, James Kaliokalani, Lydia Kamakaeha, Anna Kaiulani, Kaiminaauao, Kinini, Miriam Likelike, and William Pitt Leleiohoku II.[1] His name Kalākaua translates into "The Day [of] Battle" and refers to the unequal treaty imposed by British Captain Lord Edward Russell of the Actaeon on Kamehameha III on the day of his birth.[2][3] Although he was promised in hānai to Kuini Liliha, Kaahumanu II gave her to the high chiefess Haaheo Kaniu and her husband Kinimaka instead.[4] Haaheo died in 1843; she bequeathed all her properties to him.[5] His guardianship was entrusted in his hānai father, who was a chief of lesser rank; he took Kalakaua to live in Lahaina. Kinimaka would later remarry Pai, a Tahitian woman, who treated Kalakaua as her own until the birth of her own son.[4][6]

When Kalākaua was four, he returned to Oahu to begin his education at the Chiefs' Children's School. At the school, Kalākaua became fluent in English and the Hawaiian language. He began studying law at the age of 16. His various government positions, however, prevented him from fully completing his legal training. Instead, by 1856, the young Hawaiian was a major on the staff of King Kamehameha IV. He had also led a political organization known as the Young Hawaiians; the group’s motto was "Hawaii for the Hawaiians." In addition to his military duties, Kalākaua served in the Department of the Interior and, in 1863, was appointed postmaster general.

King Kamehameha V, the last monarch of the Kamehameha dynasty, died on December 12, 1872 without naming a successor to the throne. Under the Kingdom's constitution, if the King did not appoint a successor, a new king would be appointed by the legislature.

There were several candidates for the Hawaiian throne. However, the contest was centered on two high-ranking aliʻi, or chiefs: William C. Lunalilo and Kalākaua. Lunalilo was more popular, partially because he was a higher-ranking chief than Kalākaua and was the immediate cousin of the Kamehameha V. Lunalilo was also the more liberal of the two—he promised to amend the constitution to give the people a greater voice in the government. Many believed that the government should simply declare Lunalilo as the king. Lunalilo, however, refused to allow this to be done and insisted that everyone in the kingdom should take part in an election for the office of the king.

Kalākaua published a proclamation written in a Hawaiian poetic style. Here is an excerpt:

"O my people! My countrymen of old! Arise! This is the voice!"
"Ho! all ye tribes! Ho! my own ancient people! The people who took hold and built up the Kingdom of Kamehameha."
"Arise! This is the voice."
"Let me direct you, my people! Do nothing contrary to the law or against the peace of the Kingdom."
"Do not go and vote."
"Do not be led by the foreigners; they had no part in our hardships, in gaining the country. Do not be led by their false teachings."

On January 1, 1873, a popular election was held for the office of King of Hawaii. Lunalilo won with an overwhelming majority. The next day, the legislature confirmed the popular vote and elected Lunalilo unanimously. Kalākaua conceded.

Lunalilo died on February 3, 1874, and Kalākaua was elected to replace him, supported by the legislature although many of the populace, mainly the native Hawaiian and British subjects in the Kingdom, preferred Queen Dowager Emma, who stood against him.

Upon ascending the throne, Kalākaua named his brother, William Pitt Leleiohoku, as his heir, putting an end to the era of elected kings in Hawaiʻi.

Kalākaua began his reign with a tour of the Hawaiian islands. This improved his popularity. In December 1874, Kalākaua sent representatives to the United States to negotiate a reciprocity treaty to help end a depression that was ongoing in Hawaiʻi. In November, Kalākaua himself traveled to Washington, D.C. to meet President Ulysses S. Grant. An agreement was reached and the treaty was signed on January 30, 1875. The treaty allowed certain Hawaiian goods, mainly sugar and rice, to be admitted into the United States tax-free.

During the early part of Kalākaua's reign, the king made full use of his power to appoint and dismiss cabinets. King Kalākaua believed in the hereditary right of the aliʻi to rule. Kalākaua continually dismissed cabinets and appointed new ones. This drew criticism from people of the "Missionary Party" who wanted to reform Hawaiian government based on the model of the United Kingdom's constitutional monarchy where the monarch had very little real power over the government but had a position of great dignity and was the head of state. The party believed the legislature should control the cabinet ministers rather than the king. This struggle continued throughout Kalākaua's reign.

Journey of King Kalākaua in 1881

In 1881, King Kalākaua left Hawaiʻi on a trip around the world to study the matter of immigration and to improve foreign relations. He also wanted to study how other rulers ruled. In his absence, his sister and heir, Princess Liliʻuokalani, ruled as regent (Prince Leleiohoku, the former heir, had died in 1877). The King first traveled to San Francisco where he was given a royal welcome. Then he sailed to the Empire of Japan where he met with the Meiji Emperor. He continued through Qing Dynasty China, Siam under King Chulalongkorn (Rama V), Burma, British Raj India, Egypt, Italy, Belgium, the German Empire, Austria-Hungary, the French Third Republic, Spain, Portugal, the United Kingdom of Great Britain and Ireland, and back through the United States before returning to Hawaiʻi. During this trip, he met with many other crowned heads of state, including Pope Leo XIII, Umberto I of Italy, Tewfik, Viceroy of Egypt, William II of Germany, Rama V of Siam, U.S. President Chester A. Arthur, and Queen Victoria. In this, he became the first king to travel around the world.[7]

Kalākaua also built ʻIolani Palace, the only royal palace that exists on American soil today, at a cost of $300,000—a sum unheard of at the time. Many of the furnishings in the palace were ordered by Kalākaua while he was in Europe. 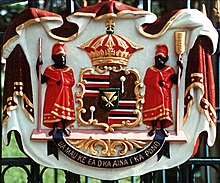 Kalākaua decided to erect the Kamehameha Statue in recognition of Kamehameha I, the first king of the whole Hawaiian Islands. The original statue was lost when the ship carrying it sank near the Falkland Islands, so a replacement was ordered and unveiled by the king in 1883. The original statue was later salvaged, repaired and sent to Hawaii in 1912. A third statue was erected in 1969 and is currently the only statue in the United States Capitol that commemorates a native Hawaiian.

King Kalākaua is said to have wanted to build a Polynesian Empire. In 1886, legislature granted the government $30,000 ($731,000 today) for the formation of a Polynesian confederation. The King sent representatives to Sāmoa, where Malietoa Laupepa agreed to a confederation between the two kingdoms. This confederation did not last very long, however, since King Kalākaua lost power the next year to the Bayonet Constitution, and thus a reformist party came into power that ended the alliance.

By 1887, the Missionary party had grown very frustrated with Kalākaua. They blamed him for the Kingdom's growing debt and accused him of being a spendthrift. Some foreigners wanted to force King Kalākaua to abdicate and put his sister Liliʻuokalani onto the throne, while others wanted to end the monarchy altogether and annex the islands to the United States. The people who favored annexation formed a group called the Hawaiian League. In 1887, members of the League armed with guns assembled together. The members of the league forced him at gun point to sign the new constitution.

This new constitution, nicknamed the Bayonet Constitution of 1887, removed much of the King's executive power and deprived most native Hawaiians of their voting rights. 75% of ethnic Hawaiians could not vote at all, because of the gender, literacy, property, and age requirements.

While historically voting rights were not granted to all citizens in the Kingdom, not unlike other countries at the time, the new constitution served to greatly disenfranchise the native Hawaiians and consolidated a major power shift. It even inserted a provision that allowed non-Hawaiian citizens to vote. Moreover, the legislature was now able to override a veto by the King, and the King was no longer allowed to take action without approval of the cabinet. The House of Nobles, the house of legislature appointed by the King, was to be elected.

A counter-revolution, led by Robert Wilcox, aimed at restoring the King's power. It failed.

By 1890, the King's health began to fail. Under the advice of his physician, he traveled to San Francisco. His health continued to worsen, and he died on January 20, 1891 at the Palace Hotel in San Francisco. His final words were, "Tell my people I tried." Shortly before his death his voice was recorded on a phonograph cylinder, which is now in the Bernice P. Bishop Museum. There has been a rumor from sources at the time that he may have "died in the sack".[8]

His remains were returned to Honolulu aboard the American cruiser USS Charleston (C-2). Because he and his wife, Queen Kapiʻolani, did not have any children, Kalākaua's sister, Liliʻuokalani, succeeded him to the Hawaiian throne.

King Kalākaua earned the nickname "the Merrie Monarch," because of his love of joyful elements of life. This was a reference to the nickname of the pleasure-loving Charles II of England. Under his reign, hula was revived, which had been banned by Queen Ka'ahumanu in 1830 after converting to Christianity. Today, his name lives on in the Merrie Monarch Festival, a hula festival named in his honor. He is also known to have revived the Hawaiian martial art, Lua, and surfing. He and his brother and sisters were known as the "Royal Fours" for their musical talents. He wrote Hawaii Ponoi, which is the state song of Hawaii today. King Kalākaua's ardent support of the then newly-introduced ukulele as a Hawaiian instrument led to its becoming symbolic of Hawaii and Hawaiian culture.[citation needed]

He was a friend of Thomas Edison who he discussed the lightbulb with, which he later used to light up ʻIolani Palace. He was also an inventor in his own right. He invented an improved double screw and an improved bottle stopper and cover in 1872, and he proposed a new type of fish ram in 1875.[9] He even proposed to build a torpedo-proof vessel in 1872. He wrote to Emperor Pedro II of Brazil on September 19, 1872 for funds to build such a vessel. Dom Pedro was interested in the young Kalakaua but not enough to invest moneys in his invention. Kalakuana then wrote Queen Victoria.[10]

In Waikiki, an avenue is named after him, "Kalākaua Avenue"; this is the main avenue of Waikiki taking people from the Ala Wai Canal to Waikiki beach as it continues almost until the Diamond Head crater. In 2003 the historic former federal building was renamed the King David Kalakaua Building after being purchased by the state and renovated.[11]