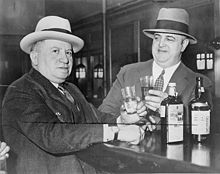 Izzy and Moe in 1935 in a New York bar, New York World Telegram and Star, Library of Congress

Izzy (Isidor/Isadore) Einstein (ca. 1880 – 17 February 1938) and Moe Smith (ca. 1887–1961) were United States federal police officers, agents of the U.S. Prohibition Unit, who achieved the most successful number of arrests and convictions during the first years of the alcohol prohibition era (1920–1925). They were known nationally for successfully shutting down illegal speakeasies and for using disguises in their work.

They made 4,932 arrests, of which 95% (around 4,680) gained convictions. In late 1925, Izzy and Moe were laid off in a reorganization of the bureau of enforcement. A report in Time magazine suggested they had attracted more publicity than wanted by the new political appointee heading the bureau, although the press and public loved the team. By 1930, both men were working as insurance salesmen.

Isidor Einstein was born in the Austro-Hungarian Empire to a Jewish family about 1880[1] He grew up speaking Yiddish and likely was educated at a schul; he also learned Hungarian, Polish and German, together with a smattering of other European languages. He emigrated to the United States about 1901.

Moe W. Smith was born ca. 1887 in New York to Jewish immigrant parents from Galicia in the Austro-Hungarian Empire. He went to public schools, and grew up speaking Yiddish and English. As a young man, he started boxing.[2]

Before 1920 Smith married Sadie Strauch, a Jewish native of Bohemia in the Austro-Hungarian Empire, and immigrant to New York, who was a native Yiddish speaker. Moe and Sadie Smith (b. ca. 1891, imm./nat. 1898 or 1900) were then living with her brother, Benjamin Strauch in Brooklyn.[4] Their daughter Estelle was born ca. 1925.

After boxing, Smith had a cigar store. Einstein was working as a postal clerk. The ratification in 1919 of the amendment to establish Prohibition required federal and local police forces to add staffing. With no background in law enforcement, but speaking several languages (Yiddish, Hungarian, German, Polish, with a little Russian, French, Spanish and Italian) in addition to English, Izzy Einstein signed up as Prohibition Agent No. 1.[2] In a short time, he invited his friend Moe Smith to join him as a partner. (They were both Masons, and may have met in the fraternal group. Though both were personally indifferent to temperance, they felt the law must be upheld, no matter how hard it was to enforce.[5])

Izzy and Moe were both rather round and apparently disarmed many of their quarry. They claimed to have used more than 100 disguises and never been detected.[2] Izzy developed what he called the "Einstein Theory of Rum Snooping" (referring to the theory of relativity by the physicist Albert Einstein.) They frequently made arrests while unarmed.

As Prohibition Bureau agents, they were the most famous and successful, known nationally for making thousands of arrests and gaining a high rate of convictions. They made 4,932 arrests, and achieved a 95% conviction rate. They confiscated 5 million gallons of liquor, worth an estimated $15 million.[2] As a result of their work, thousands of bartenders, bootleggers and speakeasy owners were sentenced to jail.[1] They used disguises to make their way into illegal bars, appearing as "streetcar conductor, gravedigger, fisherman, iceman, opera singer" and as the state of Kentucky delegates to the Democratic National Convention of 1924 held in New York, where they found only soda being served. They once went to a bar and identified themselves as Prohibition agents. The bouncer, thinking they were joking, simply laughed and let them in, where they proceeded to arrest him and everyone inside.[1]

Izzy and Moe used the press to build support:

"They frequently scheduled their raids to suit the convenience of the reporters and the newspaper photographers, and soon learned that there was more room in the papers on Monday mornings than on any other day of the week. One Sunday, accompanied by a swarm of eager reporters, they established a record by making seventy-one raids in a little more than twelve hours."[6]

In November 1925, the partners were among 38 men laid off from the New York office after a reorganization plan announced by General Lincoln C. Andrews of the national bureau. He and other officials in Washington appeared to resent the favorable coverage that Izzy and Moe received, who gained far more attention than higher officials.[7] He was reported as disapproving Prohibition agents who gained publicity, and Izzy and Moe's exploits had been well covered by the press, both tabloids and major papers such as the New York Times; their successes were sensational. As Time magazine reported at the time,

"The public which looked upon them with as much delight as ever it looked on Robin Hood was denied their adventures —adventures as thrilling as those of Sir Launcelot, as those of Richard Coeur de Lion, as those of Don Quixote de la Mancha."[8]

Both men went into the insurance business and did well, despite the Great Depression. Einstein worked for the New York Life Insurance Company.[2] He died at age 57 in February 1938, several days after having a leg amputated (perhaps as a result of diabetes.[1]) He was buried at Mount Zion Cemetery, Queens County, New York.[9]